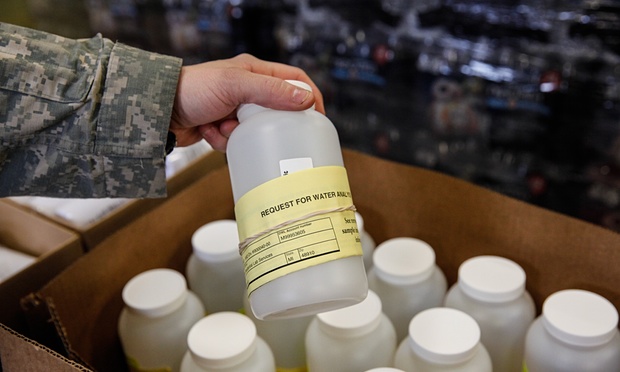 Water authorities across the US are systematically distorting water tests to downplay the amount of lead in samples, risking a dangerous spread of the toxic water crisis that has gripped Flint, documents seen by the Guardian show.

The controversial approach to water testing is so widespread that it occurs in “every major US city east of the Mississippi” according to an anonymous source with extensive knowledge of the lead and copper regulations. “By word of mouth, this has become the thing to do in the water industry. The logical conclusion is that millions of people’s drinking water is potentially unsafe,” he said.

Documents seen by the Guardian show that water boards in cities including Detroit and Philadelphia, as well as the state of Rhode Island, have distorted tests by using methods deemed misleading by the Environment Protection Agency.

There is no suggestion that EPA regulations have been broken, but the agency’s guidelines have been systematically ignored.

The revelation comes as the growing crisis in Flint, Michigan, has prompted an emergency EPA order, the condemnation of Barack Obama and the resignation of a top agency official.

The documents show a pattern of behaviour in addressing public health concerns about water across the US where “gamed” tests help ensure that water utilities don’t breach federal lead and copper rules.

Dr Yanna Lambrinidou, a Virginia Tech academic, has disclosed what she considers to be evidence of deceptive practices by city water authorities after she sat on an EPA taskforce that reviewed federal rules on lead and copper poisoning that have been in place since 1991.

The taskforce ended its work last year, shortly before the full extent of the city of Flint’s problems with smelly, brown water hit the headlines, with Lambrinidou criticising the final report for failing to step up protections to prevent the corrosion of pipes, which leads to lead leaching into water supplies.

The documents were obtained by Lambrinidou under freedom of information laws and direct requests to water authorities.

They show that several cities have advised residents to use questionable methods when conducting official tests for lead content. These include encouraging testers to run taps for several minutes to flush out lead from the pipes or even removing the filter from taps. Such methods have been criticized by the EPA for not providing accurate results, with the agency telling authorities not to use them.

The Philadelphia water department’s instructions to residents in November last year were to “remove the aerator from the faucet. Leave the aerator off until sampling is completed”. This practice was deemed “against the intent of the monitoring protocol” in 2008 by the EPA, which advised against in 2006.

In an email to Lambrinidou in November 2015, a senior official at Philadelphia Water said: “We are trying to stay up on the latest science as best we can. We get confused by it and wish that a national forum of experts could get together and agree. But it’s often left to us to try and make sense out of everything that is published and talked about.”

Philadelphia also asks testers to “run only the cold water for two minutes” before taking a water sample. This practice of “pre-flushing” the pipes before testing water is repeated in instructions given to Michigan residents, between 2007 and 2015, by cities including Detroit, which requires water to be run for five minutes before testing, Grand Rapids, Andover, Muskegon, Holland and Jackson.

Rhode Island department of health documents ask testing residents to run their water “until cold” before sampling. In an email to Lambrinidou, a senior environmental scientist at the department said: “I know that the idea of flushing six hours prior is controversial but, as of now, within the regulations.”

Many of these cities also advise residents who conduct tests to put test water into a container in a slow and steady stream from the tap. Containers with small openings are provided to ensure this. Again, this tactic is thought to influence the amount of lead found in a typical sample.

Lambrinidou warned that the issue of misleading test results was widespread. “There is no way that Flint is a one-off,” she said.“There are many ways to game the system. In Flint, they went to test neighbourhoods where they knew didn’t have a problem. You can also flush the water to get rid of the lead. If you flush it before sampling, the problem will go away.

“The EPA has completely turned its gaze away from this. There is no robust oversight here, the only oversight is from the people getting hurt. Families who get hurt, such as in Flint, are the overseers. It’s an horrendous situation. The system is absolutely failing.”

The Centers for Disease Control is very clear about lead’s impacts on children. The agency emphasises that lead has no biological function in humans, and even the smallest exposure can developmentally impair children.

Multiple studies over decades have shown wide-ranging and serious health consequences, including death in cases of acute poisoning. One of the most insidious characteristics of lead exposure is the heavy metal’s accumulation in the body: over years lead is stored in kidneys, the liver, teeth and bones, and can be released during times of stress, when bones are broken and during pregnancy.

In children, acute lead exposure can be lethal, sending them into a coma, causing loss of motor control or causing “stupor” and hyper-irritability.

Lambrinidou’s Virginia Tech colleague Marc Edwards was one of the first scientists to highlight the risks posed to Flint residents by their drinking water. The duo have previously helped illuminate suspect lead testing procedures in Washington DC and produced evidence that the disturbance of pipes in Chicago was causing lead to seep into water flows.

In 2008, Cynthia Doughtery, director of the EPA’s office of ground water and drinking water, wrote to Alliance for Healthy Homes, which raised concerns about water in DC. Doughtery stated: “We do not understand why DC Water and Sewer Authority believes it should be necessary to request flushing only in households participating in the sampling.

“While this may fall within a strict legal interpretation of the regulations, we believe that it goes against the intent of the monitoring protocol.”

Federal regulations set a lead content limit of 15 parts per billion in drinking water. If more than 10% of “high risk” households are found to be above this limit, various procedures such as public information and water treatment are supposed to kick in.

The water is tested from the tap by residents who follow instructions from water departments. A report published last year, commissioned by the American Water Works Association, found that if the water was tested directly from lead pipes, up to 96 million Americans could be found to be drinking water with unsafe levels of lead.

The EPA has yet to decide whether to implement the recommendations of the lead and copper rule working group that Lambrinidou sat on. Paul Schwartz, national policy coordinator of Water Alliance, who assisted Lambrinidou during the taskforce, said the regulatory regime was inadequate.

“The industry’s own reports show that if large water utilities followed the EPA standard for sampling, they would routinely exceed the lead limit,” he said. “The EPA has been in a very cosy relationship with the state regulators and the water utilities. They’ve allowed themselves to be captured and they haven’t followed the science.

“What we have is a recipe for a public health disaster that is much larger than what we’ve seen so far. It will take us years to get out of this situation.”

The EPA was given a day to respond to the revelations but has not yet responded.

The revelations come after Susan Hedman, a regional EPA director for Michigan, resigned on Thursday. The head of the EPA, Gina McCarthy, also issued an emergency order requiring Michigan and the city of Flint to take immediate steps after determining that the response by the local governments has been “inadequate to protect human health”.