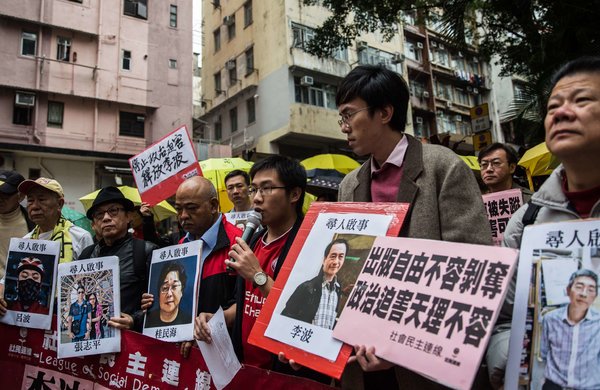 China has long had one of the world’s worst human rights records because of the way it treats its own citizens. Now, Beijing appears to be reaching beyond its territory and abducting critics from Hong Kong, a semiautonomous city, and from other countries, an alarming expansion of the government’s ruthless determination to crush dissent.

The most recent case involves Li Xin, a Chinese journalist who also worked as a government informant, got fed up with that life and fled China last year, ending up in Thailand. On Monday, his wife said that her husband, a website editor for a popular Chinese newspaper, had been missing from Thailand since Jan. 11 and that he might have been abducted by Chinese agents.

In October, Gui Minhai, a book publisher in Hong Kong who was born in China and is a naturalized Swedish citizen, vanished from his apartment in Pattaya, a Thai beach resort. This month, he reappeared on Chinese state TV and said he returned to China to turn himself in for an old crime. His friends, however, insist Mr. Gui was forcibly taken away. Four other people associated with the same Hong Kong company, Mighty Current Media, which sells books banned in China about Chinese politics and politicians, have also disappeared.

In October, Thailand deported two men to China who were registered as refugees; they had been accepted for resettlement in Canada on a claim that they faced persecution if they returned to China. The men, Jiang Yefei and Dong Guanping, were in possession of a United Nations “protection letter” and “should not be sent back to a place where their lives can be put in danger,” a spokeswoman for the United Nations High Commissioner for Refugees said. Last summer, Thailand drew condemnation from the United States and others when it deported about 100 Uighur Muslims to China, whose government is repressing separatist-leaning Uighurs in the Xinjiang region.

It’s alarming that China would ignore international borders to pursue its perceived enemies or work to make sure that critics are denied protection. In the cases affecting residents of Hong Kong, Beijing seems to be ignoring the Basic Law, which guarantees Hong Kong residents rights and freedoms not available to mainland Chinese.

In the case of Mr. Gui, a transfer would violate Thailand’s sovereignty and its criminal law, which prohibits abductions, if Thailand did not approve his return to China. If Thailand approved the transfer and Mr. Gui was not given a chance to contest the decision, it would be considered a forced return and a violation of refugee laws, human rights activists say.

Regardless, Sophie Richardson, the China director at Human Rights Watch, says it is obvious that “increasingly the Chinese government feels it is entitled to hunt down whomever it wants, wherever it wants” and that such behavior reflects a blatant disregard for international norms.

Thailand’s willingness to assist China, or to at least turn a blind eye, is assumed to be connected to the push Beijing is making to develop closer trade and military ties with Thailand, a longtime treaty ally of the United States.

Deputy Secretary of State Antony Blinken raised the abductions issue privately with Chinese officials when he visited Beijing recently. On Friday, the European Union, in some of its strongest criticism ever of China’s human rights behavior, said the disappearance of the Hong Kong publishing employees called “into question China’s respect for the rule of law and for its international human rights obligations.” America and the international community need to keep speaking out as China, once again, is testing how much the world will let it get away with.