What you need to know about hydrogen fuel cell vehicles
http://www.engadget.com/2014/12/23/hydrogen-fuel-cell-explainer/?ncid=rss_truncated

What you need to know about hydrogen fuel cell vehicles

Damn the torpedoes (and Teslas)! Two of Japan’s biggest automakers are about to make sizable wagers on a different kind of clean fuel tech: hydrogen power. Toyota will launch the $58,000 Mirai fuel cell vehicle (FCV, above) next year while hydrogen veteran Honda will out a model in 2016. But wait, aren’t EVs the last word in green cars? Fuel cell cars are EVs, in a way, but you can fill one up with hydrogen in five minutes rather than waiting hours for a charge. The only way to do that in an electric vehicle (EV) is by swapping the entire battery. So why are there exactly zero production FCVs available to buy today, but EVs everywhere? That’s a tale of efficiency, fuel, pollution and politics. 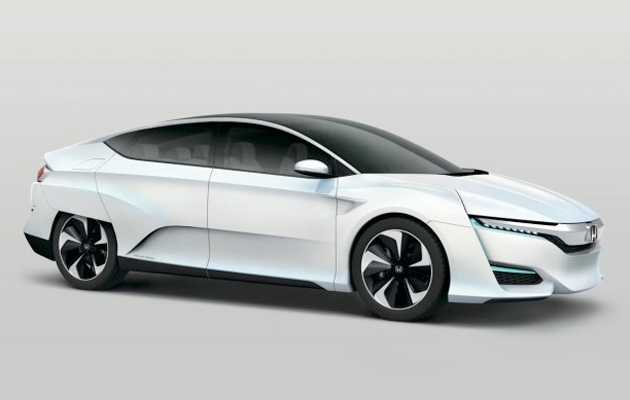 FCVs are electric cars in which the “battery” is a hydrogen/oxygen fuel cell. Unlike regular batteries with locked-in chemicals, fuel cells can be replenished — usually by hydrogen gas. Some cells also work with fuels like methane and gasoline, but they’re usually limited to industrial applications like power plants and forklifts.

Like a regular battery, fuel cells have an anode, cathode and electrolyte. Most FCVs like the Mirai or Honda’s FCX Clarity use a polymer exchange membrane fuel cell (PEMFC). In that system, hydrogen is forced through a platinum catalyst under pressure, which splits it into two ions and two electrons. The electrons power the vehicle’s electric motor, while the hydrogen combines with oxygen to form water — which exits as steam “exhaust.” Such cells are arranged in stacks to produce enough voltage to power a car.

Who is actually making fuel cell vehicles? We’ve mentioned Toyota’s $57,500 Mirai coming next year ($499 per month on lease, and California only to start) and Honda’s vehicle arriving in 2016. Hyundai will also start selling around 1,000 Tucson FCVs a year in California on a $499 per month lease. BMW will soon announce a prototype fuel-cell drive module, and has agreed to share technology with Toyota. Most other automakers, including GM, are also testing fuel-cell vehicles.

WHERE DOES THE HYDROGEN COME FROM? 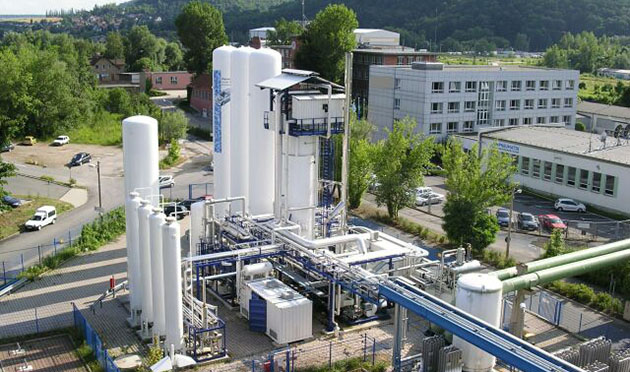 If you want a 100 percent green FCV, you need to make your hydrogen in a non-polluting way. That’s no easy task, but the best way right now is using hydrogen electrolysis, in which hydrogen and oxygen gases are produced by passing a current through water. The best systems can only produce hydrogen with about 80 percent of the energy of the electricity used to create it, however — not exactly an efficient solution.

Natural gas reforming (above) is a more cost effective way to make hydrogen, but is polluting. Steam is heated to 700-1000 degrees Celsius (about 1,800 degrees Fahrenheit) and combined with methane to produce hydrogen and carbon monoxide, along with a small amount of CO2. 95 percent of US hydrogen is produced that way thanks to large natural gas reserves from hydraulic fracturing (“fracking“).

HOW CAN YOU BUY HYDROGEN?

EVs have an established recharging infrastructure along routes (and in your home), but hydrogen distribution stations are few and far between. That’s partly due to lack of demand, but also because building them is expensive. Regular EV charging stations cost tens of thousands to build and Tesla’s supercharger stations run about $300,000. But setting up a single hydrogen fueling station costs $1-2 million because of the challenges in handling liquid hydrogen. As a result, there are currently only 50 or so of them in the US, and 22 of those are in California.

Why so expensive? As detailed by Autoblog Green, the main tank at a hydrogen fueling station holds nearly 10,000 gallons of liquid hydrogen stored at around -250 degrees Celsius (-418 degrees F). Unlike gas or diesel, it’s kept above-ground in a special area away from the pumps. It’s then converted to gas in vaporizer towers, pressurized and transferred to smaller storage tanks for distribution.

Car and Driver describes how to fuel up: first you connect a multi-pronged communication plug to your vehicle to relay its fuel needs. Then you connect the hydrogen nozzle, seal it via a twist-lock and pump, baby, pump. Some FCVs accept gas at both 350 bar and 700 bar of pressure, with the latter giving greater range. It takes about 3-5 minutes to fill up with 700 bar hydrogen fuel, which runs about $3.00-$3.50 per GGE (gasoline gallon equivalent).

Toyota and Hyundai will give buyers free hydrogen for three years. Toyota has a grand scheme to increase the number of such stations in the US by building 19 more in California and another 12 in a corridor between New York and Rhode Island. The state of California has earmarked $200 million for hydrogen stations and wants up to 40 more by 2016. Few other states have announced such plans, however, meaning it’ll be a challenge for early FCV adopters to tour around the US, a la Tesla Motors.

WHY SHOULD I CARE?

If you’re reading this, we assume you don’t want to leave a smoking husk of a planet to future generations — and we’ve already detailed how EVs help reduce greenhouse gases. But there are more selfish reasons to want green vehicles, too. Some, like Nissan’s Leaf or Toyota’s Prius actually strain your wallet less than a regular car over time if you count rebates. So how do FCVs fare as practical, green vehicles?

The main advantage of FCVs over EVs is convenience. A hydrogen car can be filled up for a long drive in 3-5 minutes, where you’ll need at least 20 minutes to kill (see above) to give a Tesla Model S less than half that range. Since that makes FCVs more like conventional cars, automakers have reasoned that consumers looking for a greener option may see them as more practical than EVs.

State regulators are of the same mind. You now need to fuel a vehicle in less than 15 minutes to a 285-mile range in order for the manufacturer to reap the maximum California ZEV (zero-emission vehicle) credits. Those credits can be resold by automakers and helped Tesla to its first-ever profitable quarter last year. However, pure EVs like the Model S no longer qualify for the max ZEV credits (not that Tesla needs them now), since most can’t meet the fueling requirement. As you’ll see soon, California’s policy change may actually increase pollution, but no doubt motivated Toyota, Honda and others to build FCVs along with EVs.

As for performance and eco-friendliness, FCVs use the same electric motors as EVs and perform similarly. Toyota has promised a 0 to 60mph time of around 10 seconds for the Mirai and an EV-trouncing range of 434 miles. Fuel-cells are a much more practical option for pickup trucks and SUVs, as well — current lithium batteries lack the range to be practical for such vehicles. Lithium batteries are much heavier than a fuel cell stack/hydrogen tank combo.

But should you feel as smug about your green bona fides in an FCV as an EV, with nothing but water coming from your tailpipe? Sadly, nope.

The main problem with FCVs is that more energy is used producing the hydrogen fuel and powering them than a regular EV. Pollution is a serious issue as well:

FCVs are more expensive to buy and operate than EVs. Toyota has said that you’ll be able to buy its new Mirai for $57,000, which could drop to as low as $45,000 after federal and state rebates. That’s a bit cheaper than a Tesla, but you can get a Nissan Leaf for about $30,000, or around $20,000 after rebates. As mentioned, fueling an FCV with hydrogen costs around $3.00 per GGE, and the DOE estimates it’ll cost about $50 to fill one up (Toyota’s free fuel notwithstanding). That means an FCV will cost twice as much to operate as a Prius hybrid, and more than four times as much as an EV. Yes, that cost will come down over time, but it will also continue to drop on EVs and hybrids.

Green hydrogen costs more to make and use. The only practical way to get green hydrogen (without reforming methane) is through electrolysis. But frankly, the electricity consumed in that process would be put to better use in a regular electric car. As the chart above shows, from the power plant to the driving wheels, EVs make much better use of green power than hydrogen cars. At least that’s where the technology is at right now.

Reformed methane hydrogen is as bad as gasoline. OK, so you get your hydrogen from reformed methane. That’s at least better than burning gas or diesel, right? Not so much. Ford recently said that FCVs “do not provide significant environmental benefits on a well-to-wheels basis” compared to gas engines. And they could actually be worse, because recent studies have shown that methane infrastructure leaks are worse than previously thought (up to seven percent), and as a greenhouse gas, methane is 86 times worse than CO2. 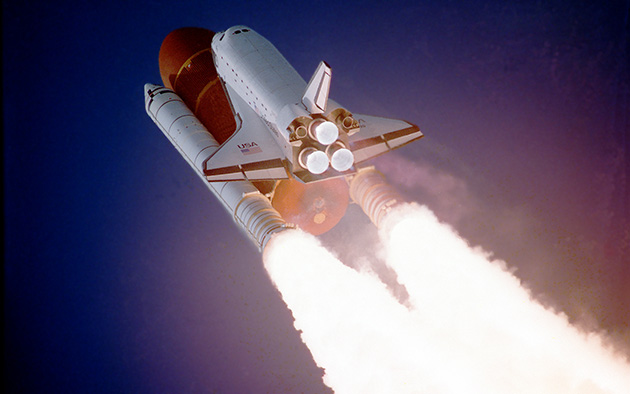 Hydrogen fueling infrastructure will be costly. As shown above, hydrogen gas is explosive, which makes it tricky to handle. Delivering electricity is pretty simple: every house has it. But hydrogen cars would require a massive investment from manufacturing to delivery, with cost, complexity and pollution added at each step.

Does all that seem like we’re down on hydrogen cars? Compared to EVs as green, economical vehicles right now, yes, we are — judged on those standards, they just don’t measure up. But in consumers’ hearts, “practical” is also big, and fuel cell vehicles are undeniably faster to fuel and have more range. Also, they’re still in their infancy — plug-in electric cars also had problems that seemed insurmountable ten years ago, and there are now around 280,000 of them in the US. As one FCV booster put it, 97 percent of the cars on the road still burn gas, so why all the hate from EV fans? Fuel-cell development will push both technologies to improve and hopefully push fossil-fuel burning cars off the road sooner than later. 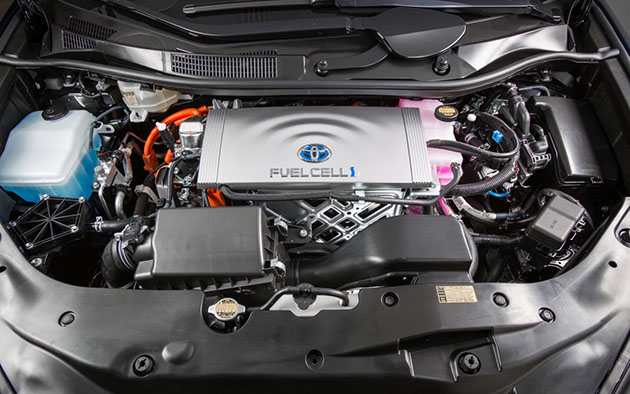 Recent FCV launches by Toyota and others have stirred up interest in the tech and we’ve just scratched the surface. There’s a load of information from California’s Fuel Cell Partnership site and the US Department of Energy. Clean Technica wrote a scathing takedown of what they call a “profoundly counterproductive” funding of fuel cell vehicles, and Tesla CEO Elon Musk called them “bullshit” (big surprise). Thinkprogress has a three-part series (1,2,3) critical of hydrogen cars compared to EVs. Green Car Reports also posed 10 questions to Toyota, Honda and Hyundai about serious issues with FCVs, complete with responses. Meanwhile, this FCV advocate posed 10 questions right back at them. Finally, though fuel cell cars are new, none other than Jack Nicholson pointed out (below) that hydrogen cars have been around much longer.