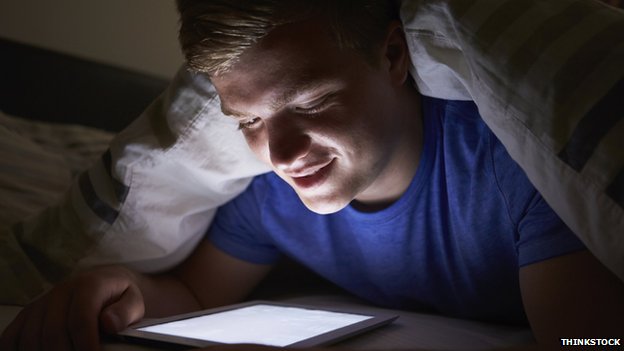 If you curl up under the duvet with an e-book for a bedtime read then you are damaging your sleep and maybe your health, US doctors have warned.

They found it took longer to nod off with a back-lit e-reader, which led to poorer quality sleep and being more tired the next morning.

Original Kindle readers do not emit light so should be fine, say experts.

Experts said people should minimise light-exposure in the evening.

Whether you are perusing the Man Booker shortlist or leafing through Zoella, the impact of reading on your sleep is probably the last thing on your mind.

But there has been growing concern about the dangers of light before bedtime.

Our bodies are kept in tune with the rhythm of day and night by an internal body clock, which uses light to tell the time.

But blue light, the wavelength common in smartphones, tablets and LED lighting, is able to disrupt the body clock.

Blue light in the evening can slow or prevent the production of the sleep hormone melatonin. 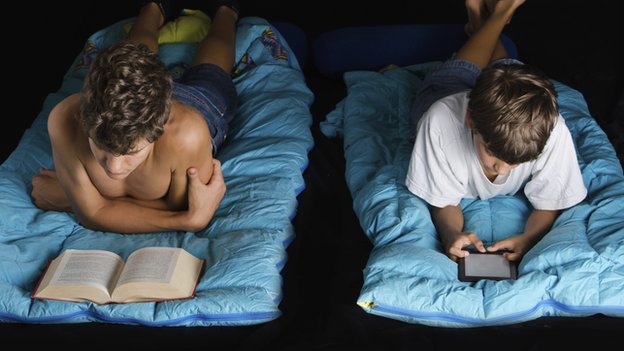 Twelve people were locked in a sleep laboratory for two weeks.

They spent five days reading from a paperback and five days from an iPad.

Regular blood samples showed the production of the sleep hormone melatonin was reduced by reading an e-book.

People also took longer to fall asleep, had less deep sleep and were more tired the next morning.

The researchers said other e-readers such as the Nook and Kindle Fire produced similar wavelengths of light and would have the same impact.

The findings were published in the journal Proceedings of the National Academy of Sciences.

Lead researcher Prof Charles Czeisler told the BBC News website: “The light emitted by most e-readers is shining directly into the eyes of the reader, whereas from a printed book or the original Kindle, the reader is only exposed to reflected light from the pages of the book.”

“Sleep deficiency has been shown to increase the risk of cardiovascular disease, metabolic diseases like obesity and diabetes, and cancer.

“Thus, the melatonin suppression that we saw in this study among participants when they were reading from the light-emitting e-reader concerns us.”

Dr Victoria Revell, who researches the impact of light on the body at the University of Surrey, told the BBC: “This is a very good study and I think it’s really interesting.

“We should be advising people to minimise their [light-emitting e-reader] use in the evening, particularly teenagers who are a group that are using their phones and tablets late in to the evening.”

Teenagers naturally have a late body clock, which makes them slow to rise in the morning and up late at night.

“People who already have a delayed body clock are delaying themselves much further and that is a very important message,” Dr Revell added.

Prof Czeisler agreed, saying there was “special concern” for teenagers who were already sleep deficient by being forced to get up early for school.