By Gina Kolata and Sabrina Tavernise

As the life expectancy of Americans has declined over a period of three years — a drop driven by higher death rates among people in the prime of life — the focus has been on the plight of white Americans in rural areas who were dying from so-called deaths of despair: drug overdoses, alcoholism and suicide.

But a new analysis of more than a half-century of federal mortality data, published on Tuesday in JAMA, found that the increased death rates among people in midlife extended to all racial and ethnic groups, and to suburbs and cities. And while suicides, drug overdoses and alcoholism were the main causes, other medical conditions, including heart disease, strokes and chronic obstructive pulmonary disease, also contributed, the authors reported.

“The whole country is at a health disadvantage compared to other wealthy nations,” the study’s lead author, Dr. Steven Woolf of Virginia Commonwealth University, said. “We are losing people in the most productive period of their lives. Children are losing parents. Employers have a sicker work force.”

That some Americans’ life spans were decreasing has been well established. But the level of detail in Tuesday’s study was new, as was the rich analysis of the geography of the declines. Health experts say the full effect was startling. 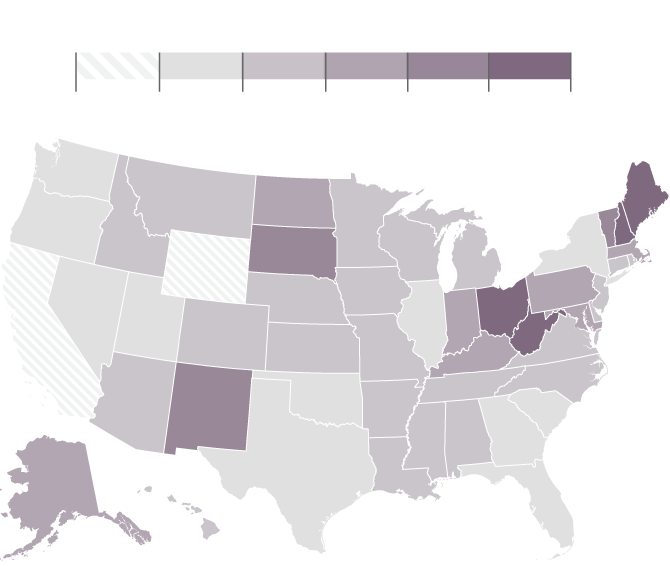 The increase in deaths among people in midlife highlighted the lagging health measures in the United States compared with other wealthy nations, despite the fact that the United States has the highest per capita health spending in the world, noted an editorial that accompanied the study.

“Mortality has improved year to year over the course of the 20th century,” said Dr. Samuel Preston, a demographer at the University of Pennsylvania. “The 21st century is a major exception. Since 2010 there’s been no improvement in mortality among working-aged people.”

While the total number of excess deaths — meaning the number of deaths that would not have happened if the mortality rate had continued to improve — is small, at 33,000, deaths in younger people have a much bigger effect on national life-expectancy estimates than deaths of people in their 80s or 90s.

Death rates are actually improving among children and older Americans, Dr. Woolf noted, perhaps because they may have more reliable health care — Medicaid for many children and Medicare for older people.

“The fact that it’s so expansive and involves so many causes of death — it’s saying that there’s something broader going on in our country,” said Ellen R. Meara, a professor of health policy at Dartmouth College. “This no longer limited to middle-aged whites.”

The states with the greatest relative increases in death rates among young and middle-aged adults were New Hampshire, Maine, Vermont, West Virginia and Ohio.

Dr. Woolf said one of the findings showed that the excess deaths were highly concentrated geographically, with fully a third of them in just four states: Ohio, Pennsylvania, Kentucky and Indiana.

“What’s not lost on us is what is going on in those states,” he said. “The history of when this health trend started happens to coincide with when these economic shifts began — the loss of manufacturing jobs and closure of steel mills and auto plants.”

For demographers like Kenneth Wachter, a professor emeritus at the University of California, Berkeley, the study’s findings are not surprising because there have been a number of similar reports. But, he said, “it is a valuable paper in bringing together these trends.”

The study leaves unanswered questions, including, Why is there an increased death rate only in the 25-to-64 age group?

“We need to look at root causes,” Dr. Woolf said. “Something changed in the 1980s, which is when the growth in our life expectancy began to slow down compared to other wealthy nations.”

The increased deaths from drug overdoses reflected increased rates of addiction to opioids. But they have also risen because of changes in the drug supply in the East and Midwest. Over the last decade, the synthetic drug known as fentanyl has been mixed into heroin — or in some places has replaced it. That has made the drug supply more deadly, since it is difficult for users to know the dose they are taking.

This is not the first time that life expectancy has gotten stuck in the United States. Male life expectancy stalled in the 1960s, Dr. Preston said. It picked up again, and the gains made since have been substantial.

Sam Harper, an epidemiologist at McGill University in Montreal, offered a word of caution.

“I’m not sure the dramatic, ‘there’s something desperately wrong with the entire country’ narrative is entirely accurate,” Dr. Harper said. “Certain groups, such as Hispanics and Asians, are doing O.K. It’s not like the entire country is being subsumed by a single social phenomenon that can explain all of this. There are a lot of moving parts.”

He added: “The U.S. has made dramatic gains in life expectancy over the past several decades. It’s important to remember that people here live a very long time compared to a lot of places in the world.”

John G. Haaga, director of the division of behavioral and social research at the National Institute on Aging, which funded this study, also saw a bright spot: Life expectancy in the coastal metro areas — both east and west — has improved at roughly the same rate as in Canada.

“It’s important because it means this is not somehow deep in our national soul or genetics or something,” he said. “We know we can do better right here in America. It proves that it’s possible.”

The worrying pattern, he said, was the growing divide by region.

“We used to be much more similar, even when I was in college in the early 1970s and now we are pulling apart,” he said. “We haven’t really explained what’s going wrong and what to do about it.”

He said his institute is funding a committee at the National Academies of Sciences to explore the issue.