What Robert E. Lee Wrote to The Times About Slavery in 1858 – NYTimes.com
https://mobile.nytimes.com/2017/08/18/us/robert-e-lee-slaves.html?referer=https://news.google.com

One day in January, a few years before the Civil War, Robert E. Lee wrote to The New York Times, seeking a correction.

The man who would become the top Confederate general was trying to set the record straight about the slaves on his wife’s estate in Virginia, and about the last wishes of a dying slave owner.

He wrote that the people enslaved on his family’s property, in what was then known as Alexandria County, were not “being sold South,” as had been reported. And he implied that he would free them within five years.

The letter is one of many written by Lee that sheds slivers of light on his thoughts about slavery. Historians have clashed — and are clashing still — over the strength of his support for the system of forced labor that kept millions of people in bondage for generations.

Now that statues of Lee and other Confederate leaders are the focus of an intensely heated national debate, the issue is an especially pertinent one.

“He was not a pro-slavery ideologue,” Eric Foner, a Civil War historian, author and professor of history at Columbia University, said of Lee. “But I think equally important is that, unlike some white southerners, he never spoke out against slavery.”

When Lee wrote his letter to The Times, he was an accomplished United States Army officer acting as the executor of his father-in-law’s will. His wife, Mary Anna Custis Lee, a descendant of Martha Washington, had recently inherited her father’s estate, Arlington House, along with the slaves who lived there.

Interactive Feature | Sign Up for the Race/Related Newsletter Join a deep and provocative exploration of race with a diverse group of New York Times journalists.

In his will, Ms. Lee’s father, George Washington Parke Custis, said his slaves should be freed five years after his death.

But an article that was first published by The Boston Traveller and reprinted in The Times on Dec. 30, 1857, contended that the slaves “will be consigned to hopeless Slavery unless something can be done” because Mr. Custis’s heirs did not want to free them.

An article published in The New York Times on Dec. 30, 1857, speculated that the emancipation of slaves at Arlington House was stalled because of “foul play.” Robert E. Lee, who would become the top Confederate general during the Civil War, begged to differ.

It also said that Mr. Custis, while dying, told his slaves that they should be freed immediately, rather than five years on.

Lee challenged that account. In his letter to The Times, he said that “there is no desire on the part of the heirs to prevent the execution” of the will. And he said Mr. Custis, who was “constantly attended” by family members during his final days, had never been heard granting immediate freedom to his slaves.

The Times published Lee’s letter on Jan. 8, 1858, (though the letter itself, written shortly after New Year’s, appears to be mistakenly dated 1857) and said it was “glad” to be corrected on the matter.

Lee joined the secessionists in April 1861. He left Arlington House, and the estate was eventually overtaken by Union soldiers. (The dead were buried in its grounds, which would later become the site of Arlington National Cemetery.) Over the course of the conflict, many slaves were hired out or escaped the property.

In 1862, in accordance with Mr. Custis’s will, Lee filed a deed of manumission to free the slaves at Arlington House and at two more plantations Mr. Custis had owned, individually naming more than 150 of them. And in January 1863, President Abraham Lincoln issued the Emancipation Proclamation, declaring that all people held as slaves in the rebelling states “are, and henceforward shall be free.”

Of all the letters by Lee that have been collected by archivists and historians over the years, one of the most famous was written to his wife in 1856. “In this enlightened age, there are few I believe, but what will acknowledge, that slavery as an institution, is a moral & political evil in any Country,” he wrote.

But he added that slavery was “a greater evil to the white man than to the black race” in the United States, and that the “painful discipline they are undergoing, is necessary for their instruction.” 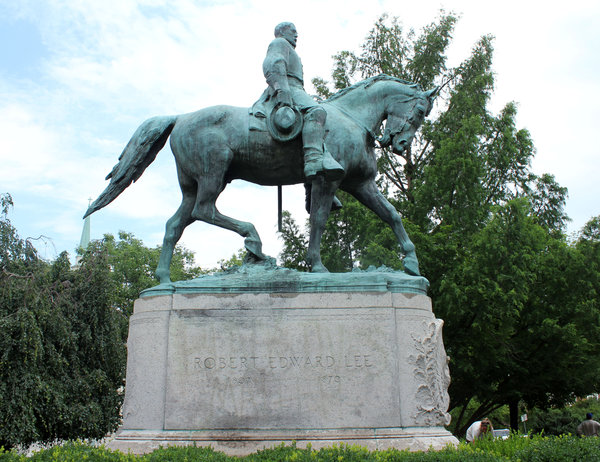 The Robert E. Lee statue in Charlottesville, Va., was at the center of a violent rally this past weekend.

The 1857 article in The Times noted that slaves’ own voices were missing from the story of Mr. Custis’s dying wishes. It said that when he told his slaves they would be freed, “no white man was in the room, and the testimony of negroes will not be taken in Court.”

But years later, in 1866, one former slave at Arlington House, Wesley Norris, gave his testimony to the National Anti-Slavery Standard. Mr. Norris said that he and others at Arlington were indeed told by Mr. Custis they would be freed upon his death, but that Lee had told them to stay for five more years.

So Mr. Norris said he, a sister and a cousin tried to escape in 1859, but were caught. “We were tied firmly to posts by a Mr. Gwin, our overseer, who was ordered by Gen. Lee to strip us to the waist and give us fifty lashes each, excepting my sister, who received but twenty,” he said.

And when the overseer declined to wield the lash, a constable stepped up, Mr. Norris said. He added that Lee had told the constable to “lay it on well.”

Dr. Foner said that after the war, Lee did not support rights for black citizens, such as the right to vote, and was largely silent about violence perpetrated by white supremacists during Reconstruction.

The general did, however, object to the idea of raising Confederate monuments, writing in 1869 that it would be wiser “not to keep open the sores of war but to follow the examples of those nations who endeavored to obliterate the marks of civil strife.”