The police arrested two men, including a member of the Ku Klux Klan, and were seeking a third in connection with violent episodes that took place at the “Unite the Right” rally in Charlottesville, Va., this month, including the beating of an African-American man that was caught on video and widely shared on social media.

The arrests came two weeks after the Aug. 12 rally, which brought hundreds of white supremacists to Charlottesville to protest the removal of a statue of Robert E. Lee, the Confederate general. The day was marked by skirmishes between demonstrators and counterprotesters, and a 32-year-old woman, Heather D. Heyer, was struck and killed by a car in what the authorities have called a terrorist attack.

The police were widely criticized for not doing more to stop violence throughout the morning.

The beating victim, DeAndre Harris, 20, was cornered in a parking garage just yards from Police Headquarters, where he was attacked by six men who had gathered for the rally. Mr. Harris has a broken wrist and sustained a head injury that required 10 staples, his lawyer, S. Lee Merritt, said.

Daniel P. Borden, 18, was arrested in Ohio in connection with the attack on Mr. Harris.

Daniel P. Borden, 18, was charged with malicious wounding in connection with the aggravated assault on Mr. Harris, the police said. He was arrested Friday and was being held at the Hamilton County Justice Center in Cincinnati, the Charlottesville police said in a statement.

The authorities also released a wanted poster for Alex Michael Ramos, 33, of Marietta, Ga. He was also charged with malicious wounding, a felony punishable by one to five years in prison.

“For DeAndre and his family, news of the arrest of one of the six men that assaulted him comes five suspects short and 14 days too late,” Mr. Merritt said Saturday. “Given that these men were identified by a journalist almost immediately, it appears that law enforcement sat on its hands for a couple of weeks before deciding they probably should arrest someone.” 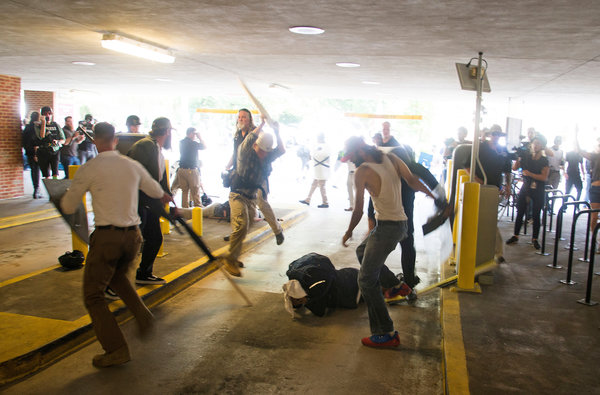 The beating of DeAndre Harris on the day of the “Unite the Right” rally in Charlottesville, Va., was caught on video. Two men have been charged in connection with the attack.

Mr. Merritt said the suspects were identified as a result of efforts by Shaun King, an activist and a columnist at The Daily News in New York, who issued a $10,000 reward for information that led to arrests.

According to Mr. Merritt, Mr. Ramos’s friends identified him after he posted about the attack on Facebook, saying that as a Puerto Rican man he disavowed white supremacy but participated in the rally because he despises leftists. In the video, Mr. Ramos appeared to have something wrapped in his hands that he used to strike Mr. Harris, Mr. Merritt said. 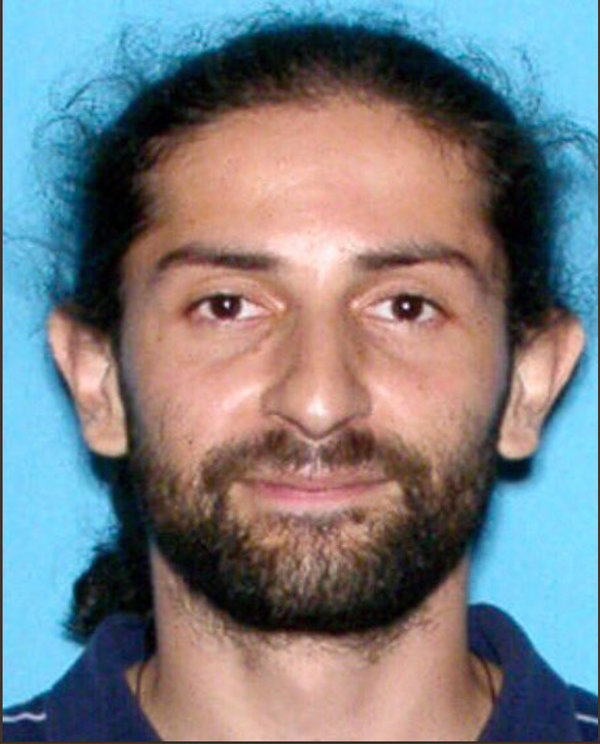 Alex Michael Ramos, 33, of Marietta, Ga., was being sought by the police in connection with the attack on Mr. Harris.

The attack started because white supremacists had tried to “spear” one of Mr. Harris’s friends with a flagpole, and Mr. Harris tried to knock the pole away, the lawyer said. Suddenly Mr. Harris, an aspiring rapper, was rushed by more than a dozen men and fell backward. The video showed Mr. Harris on the ground being pummeled.

The police also made an arrest Saturday in connection with an earlier incident at the rally, in which a man was captured on video shooting at the ground in the direction of an African-American counterprotester. The counterprotester, Corey Long, was the friend Mr. Harris would go on to defend in the parking garage a few hours later, Mr. Merritt said.

The American Civil Liberties Union of Virginia submitted the video to the F.B.I. and the local police.

“At first it was peaceful protest,” Mr. Long told The Root, a black news and culture website. “Until someone pointed a gun at my head. Then the same person pointed it at my foot and shot the ground.”

Photos showed that Mr. Long had been using an improvised torch to spar with a man carrying a flagpole when the shot was fired.

Richard W. Preston, 52, was charged with discharging a firearm within 1,000 feet of a school, a crime punishable by two to 10 years in prison. He was arrested Saturday and is in the custody of the Baltimore County Detention Center in Towson, Md., the police said.

Mr. Preston is an imperial wizard in the Ku Klux Klan, according to numerous news reports. “We didn’t go as the Klan,” Mr. Preston told an Indiana TV station shortly after the rally. “We didn’t go there to create havoc and fight. We went there to protect a monument.”

In a statement released Saturday, the police said investigators had identified 35 victims of the car attack that killed Ms. Heyer. James Alex Fields Jr., 20, of Maumee, Ohio, who the authorities say drove the car, has been charged with killing Ms. Heyer and wounding numerous other people in a crowd.

“At this time, our detectives have identified 35 victims and have reached out to each of them. We are still awaiting a response from several victims,” police said. “This is an ongoing investigation, with multiple victims, witnesses and items of evidence.”