WASHINGTON — The bomb that the United States dropped on an Islamic State cave complex in Afghanistan on Thursday was big — at 22,000 pounds, the most powerful conventional weapon in the American arsenal. Arguably, even bigger were the messages it sent, whether by design or not.

To potential adversaries like Syria and North Korea, the bombing could signal deterrence. For the American public, it underscored the Pentagon’s more aggressive stance under President Trump than under his predecessor, whose administration never even debated using the weapon.

Dozens of militants were killed, Afghan officials said. American commanders said that the bomb was chosen because it fit the target, a series of tunnels with dug-in positions nearby used by militants in a remote part of eastern Afghanistan, and that it posed little or no risk to civilians. The bombing spared troops from fierce fighting in caves.

It also illustrated how Mr. Trump is releasing commanders from Obama-era restrictions on the use of force and how the top United States commander in Afghanistan, Gen. John W. Nicholson Jr., was seeking to showcase Afghanistan’s myriad threats. General Nicholson, who has requested reinforcements to the 8,500 American troops stationed there, drew his bosses’ attention by dropping what the Pentagon has nicknamed the “mother of all bombs.”

“Another promise kept,” Donald J. Trump Jr., the president’s son, said on Twitter, noting his father’s campaign promise to vigorously strike the Islamic State and using an emoji of a bomb with a lit fuse.

Using the weapon, called the GBU-43/B Massive Ordnance Air Blast, or MOAB, presents special challenges. It can obliterate everything within a 1,000-yard radius. The ordnance contains almost 19,000 pounds of Composition H6, an explosive compound that is roughly one-third stronger than an equivalent weight of TNT.

In Afghanistan, with its rural and agrarian economy, civilians who are engaged in food-gathering, woodcutting, farming or tending herds are often near or beside concentrations of militants. The blast radius of an explosion of this size could pose risks to people far from the center of the target.

For that reason, President Barack Obama’s administration did not consider using the bomb, American officials said. Early in the Iraq war in April 2003, during the administration of President George W. Bush, American commanders weighed using the weapon to try to kill President Saddam Hussein, who was on the run from United States troops who had toppled his government.

But commanders discarded the option when analysts estimated that the bomb’s blast would also kill thousands of civilians. “The collateral damage would have been massive,” said Marc Garlasco, who led a team in the military’s Joint Staff that was seeking to target Mr. Hussein.

The Afghan government said Friday that 36 militants were killed in Thursday’s blast. That number has not been independently verified, and official Afghan government casualties estimates have been unreliable in the past. Another official put the number of dead militants at more than 80.

Early reports from the area near the blast did not suggest that any civilians had been killed and said that most civilians had left the target area in recent weeks because of continuing fighting between the militants and Afghan forces and American troops. 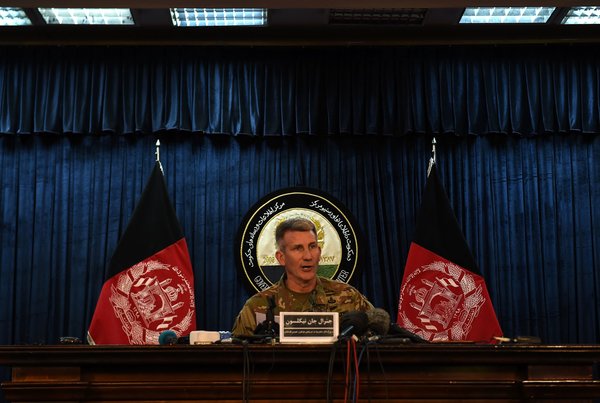 The top United States commander in Afghanistan, Gen. John W. Nicholson Jr., said attack with the powerful bomb was necessary to defeat obstacles, hidden bombs and the dug-in positions used by the militants.

The attack seemed to have a limited purpose and to be less significant than implied by the news coverage that focused principally on the unusually large size of the bomb.

By comparison, under Mr. Obama, the Air Force killed more than 100 Qaeda militants in Syria in the waning hours of his presidency by dropping bombs with no memorable name from B-52 planes.

General Nicholson said Thursday’s attack was tactically necessary to defeat obstacles, hidden bombs and the dug-in positions used by the militants. “Therefore, this was the appropriate weapon to use at this time,” he said.

But the Islamic State’s regional affiliate in Afghanistan, largely made up of former members of the Pakistani Taliban, numbers only some 700 fighters, compared with a peak of 2,000 to 3,000 in the spring of 2016.

The Trump administration has not publicly articulated a thorough long-term plan or endgame for the Afghan war and faces harsh circumstances in a conflict beset by starts and stops, troop commitments and withdrawals, and a series of disappointments and failures over more than a decade and a half of varied missions, priorities and even doctrines.

Many of the areas where American troops and their allies have fought hard and died in large numbers have fallen or reverted to militant control in recent years. The Afghan security forces, created with American training, money and weapons, have not lived up to the Pentagon’s promises.

Interactive Feature | Get the Morning Briefing by Email What you need to know to start your day, delivered to your inbox Monday through Friday.

The pace of airstrikes has increased, and Thursday’s bombing served as an example of a new weapon being applied to the war. But past airstrikes, while they have killed an uncountable quantity of militants, have not prevented their organizations from regrouping and refilling their ranks. And in this case, the use of the powerful bomb — whether it was seen internationally as a signal of a renewed American intention of using force — could also be read as an option that commanders viewed as necessary because they have limited resources on the ground.

While some analysts said the bombing sent a stern symbolic message to Syria and North Korea, it has little real utility against those countries, or Iran or Russia, because it is pushed out of a lumbering cargo plane that can operate safely only over nations that have no effective air defenses or air forces.

Some critics said the bombing could send an unintended message to North Korea that may unnecessarily rattle nerves in Pyongyang at a time of high tension for no clear strategic reason, while failing to advance a long-term strategy in Afghanistan.

“Let’s not confuse this tactic for a strategy,” said Representative Seth Moulton, a Massachusetts Democrat and former Marine Corps captain who served four tours in Iraq.

At the Pentagon, military officials said that they did not need to request authorization for the strike from Mr. Trump, although three officials also acknowledged that if Mr. Obama had still been in charge, the Defense Department would probably have sent the proposal to the White House before proceeding.

But instead of the deliberative processes in place during the Obama administration that made for lengthy National Security Council staff meetings, Mr. Trump has approved allowing his commanders more authority, giving the Pentagon a rare freedom to assert its control over national security policy from a commander in chief who eschews quibbling over the details.