Donald Trump supporters attended a rally in Cincinnati on Thursday.

CINCINNATI — In an arena normally reserved for ice hockey, the Donald Trump crowd was on edge.

Some wore shirts with slogans like “[Expletive] Your Feelings” or, in reference to the female Democratic nominee, “Trump that Bitch.” Others had buckets of popcorn, ready for the show. When the media entourage entered, thousands erupted in boos.

We’ll try not to show that ad again

Anger and hostility were the most overwhelming sentiments at a Trump rally in Cincinnati last week, a deep sense of frustration, an us-versus-them mentality, and a belief that they are part of an unstoppable and underestimated movement. Unlike many in the country, however, these hard-core Trump followers do not believe the real estate mogul’s misfortunes are of his own making.

At a time when trust in government is at a low point, Trump is actively stoking fears that a core tenet of American democracy is also in peril: that you can trust what happens at the ballot box.

His supporters here said they plan to go to their local precincts to look for illegal immigrants who may attempt to vote. They are worried that Democrats will load up buses of minorities and take them to vote several times in different areas of the city. They’ve heard rumors that boxes of Clinton votes are already waiting somewhere.

At rally in N.H., Trump supporters see conspiracy against him

And if Trump doesn’t win, some are even openly talking about violent rebellion and assassination, as fantastical and unhinged as that may seem.

“If she’s in office, I hope we can start a coup. She should be in prison or shot. That’s how I feel about it,” Dan Bowman, a 50-year-old contractor, said of Hillary Clinton, the Democratic nominee. “We’re going to have a revolution and take them out of office if that’s what it takes. There’s going to be a lot of bloodshed. But that’s what it’s going to take. . . . I would do whatever I can for my country.”

He then placed a Trump mask on his face and posed for pictures.

Trump’s campaign has taken a sharp turn toward such dark warnings in recent days. He says he is a victim of conspiracies, portrays himself as a martyr to the cause of the right wing, and is stoking anger in advance of what may be a defeat on Nov. 8.

His campaign has been stamped with improbability ever since he announced his candidacy in June 2015. He captured the nomination with rhetoric appealing to the angriest voters in the conservative base.

Trump challenges Clinton to drug test before next debate

But then came the unraveling — beginning soon after his July nominating convention, when he lambasted the Muslim parents of a slain war hero. His poll numbers recovered some in late summer, but then the bottom seemed to drop out in the last week with the explosive video in which he brags about using his celebrity power to sexually assault women by forcibly kissing them and groping them.

The emergence of that video seems to have sent Trump into a regression, with speeches that — instead of expanding his appeal — more directly target the angry base that formed the strongest core of his support from the beginning.

Above all, Trump is now using the prospect of his loss to undermine faith in democratic institutions.

He saved some of his harshest criticism for the media, which he said is in league with Clinton to steal the election.

“The media is indeed sick, and it’s making our country sick, and we’re going to stop it,” he said.

Mainstream Republicans are watching these developments at the top of the ticket with a growing sense of alarm, calling Trump’s latest conspiracy theories of a rigged election irresponsible and dangerous. They also say the impact of voter fraud or errors on the outcome of elections is vastly overblown.

“How do you proclaim fraud before the incident takes place? It’s like my calling you a robber before you rob the bank,” said Al Cardenas, who was chairman of the Republican Party of Florida during the 2000 electoral recount. “In America, you call out a crime or malfeasance after it happens.”

Cardenas, having been immersed in the Florida recount for 37 days, said an average of 1.5 percent of votes cast in the nation are not recorded, due mostly to technical issues and procedural errors.

“That’s a significant number in a close election, but they are not wrongdoings,” Cardenas said. “Americans should feel that the ultimate outcome of the election is fair. That’s how we defend our democracy.”

Cardenas said he would not vote for Trump or Clinton — even if that means Clinton wins.

Fergus Cullen, former chairman of the New Hampshire GOP, said it was an incredibly important moment in 2000 when Democrat Al Gore gave a speech saying he accepted the results of the Supreme Court decision to award the majority of electoral votes and presidential victory to George W. Bush.

“Had he not done that, or done so halfheartedly, or even suggested that he’d been robbed, or otherwise tried to delegitimize the results, it would have been a huge blow to our democratic process,” Cullen said.

Cullen expects Trump’s warnings about a rigged election to get even uglier in coming weeks, and he fears they will incite violence if Trump loses.

“That’s really scary,” Cullen said, recounting the violence at Trump rallies around the country leading up to the Republican National Convention. “In this country, we’ve always had recriminations after one side loses. But we haven’t had riots. We haven’t had mobs that act out with violence against supporters of the other side. There’s no telling what his supporters would be willing to do at the slightest encouragement from their candidate.”

While voters have certainly questioned election outcomes, it is unprecedented for the nominee of a major party to do so, historians say.

“What’s really distinct is the candidate himself putting this out front and center as a consistent theme throughout the last part of the campaign, and doing it when there’s no evidence of anything,” said Julian Zelizer, a Princeton University presidential scholar.

Some of Richard Nixon supporters in 1960 claimed that John F. Kennedy’s father bought the election for his son in Chicago. Many Democrats in 2000 felt the Supreme Court intervened on behalf of Bush. Fringe conservatives in 2008 launched the birther movement, which Trump joined with gusto in 2011, in an attempt to delegitimize Barack Obama’s presidency.

“If Clinton is elected, as it looks like she will be, they will be convinced she should not be president because the Republican nominee has confirmed their own fears, anxieties, and conspiratorial outlook,” Zelizer said. “It will make governing more difficult.”

Trump has recently started encouraging his mostly white supporters to sign up online to be “election observers” to stop “Crooked Hillary from rigging this election.” He’s urging them to act as posses of poll watchers in “other” communities to ensure that things are “on the up and up.”

“Watch your polling booths,” he warned.

His supporters are heeding the call.

“Trump said to watch your precincts. I’m going to go, for sure,” said Steve Webb, a 61-year-old carpenter from Fairfield, Ohio.

“I’ll look for . . . well, it’s called racial profiling. Mexicans. Syrians. People who can’t speak American,” he said. “I’m going to go right up behind them. I’ll do everything legally. I want to see if they are accountable. I’m not going to do anything illegal. I’m going to make them a little bit nervous.”

Some Trump supporters say that if he doesn’t win, they figure the United States government will be no better than dictatorships where elections cannot be trusted.

“We’re heading toward North Korea, without a doubt,” said Grant Reed, a Trump supporter wearing a shirt that said, “If you’re offended, I’ll help you pack.”

Joe Cecil, a 39-year-old restaurant manager, said he has never voted before but is newly inspired by Trump.

“If people are offended by the sexual stuff, what do they think is going to happen when Muslims come here, implement Sharia law, and start raping our women?” he asks.

But he questions the integrity of the voting system, particularly in places that don’t require identification to vote.

“This is my prediction: Trump is going to win the popular vote by a landslide, and the Electoral College will elect Hillary, because of all the corruption,” he said. “Maybe it’ll all work and restore my faith in humanity. But I doubt it.”

It’s a common strand among the Trump crowd. They say they have seen videos of Clinton supporters ripping up Republican registrations. They believe Obama is rushing to allow illegal immigrants to become citizens in order to vote.

“We’re going to have a lot of election fraud,” said Jeannine Bell Smith, 65-year-old longtime teacher in a red Trump shirt with a bucket of popcorn under her arm. “They are having illegals vote. In some states, you don’t need voter registration to vote.”

After a prayer is said and the national anthem sung, she leans in.

“We can’t have that lying bitch in the White House,” she said.

“If Hillary wins, it’s rigged,” said Judy Wright, who is from Illinois but took off work recently to come volunteer for Trump in Ohio.

She sighs at what seems to her an unfathomable outcome.

Matt Viser can be reached at matt.viser@globe.com

Tracy Jan can be reached at tracy.jan@globe.com. 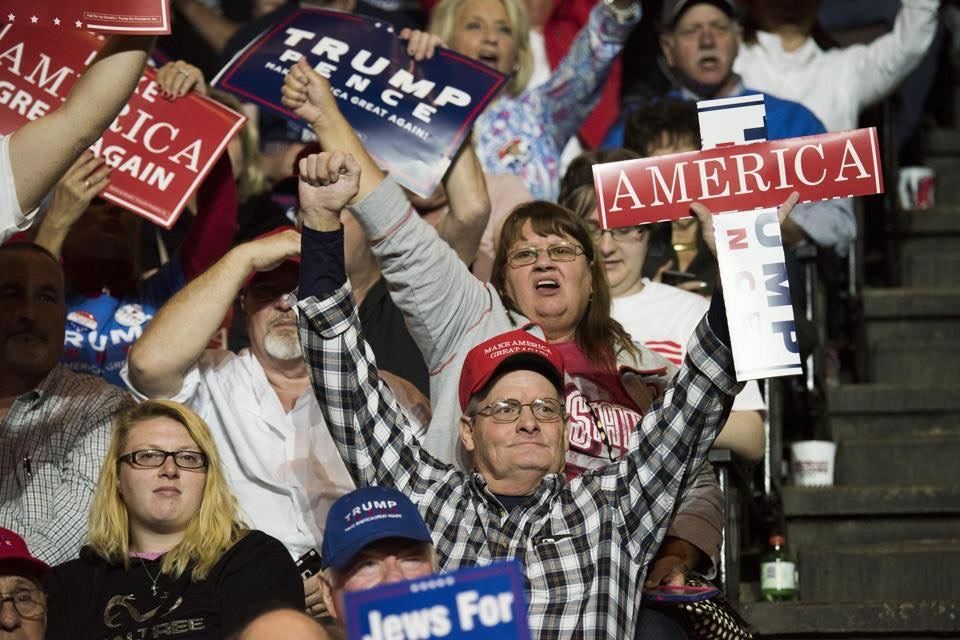