Off the Beat and Into a Museum: Art Helps Police Officers Learn to Look – NYTimes.com
http://mobile.nytimes.com/2016/04/27/arts/design/art-helps-police-officers-learn-to-look.html 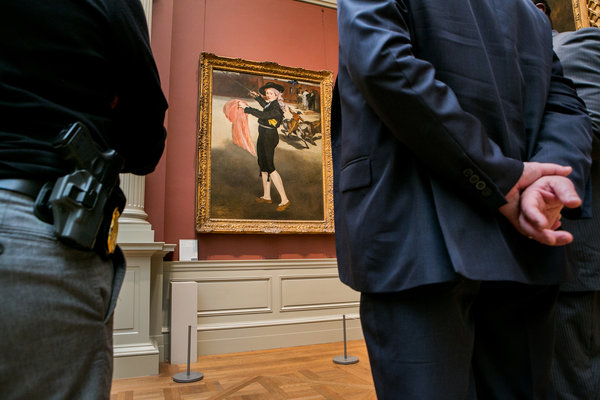 To teach people how to notice details they might otherwise miss, Amy E. Herman, an expert in visual perception, likes to take them to museums and get them to look at the art. Recently she escorted a group of New York City police officers to the Metropolitan Museum of Art and asked them to describe some of the things they saw.

They did their best. “This seems to be a painting of some males with horses,” one officer said of Rosa Bonheur’s mid-19th-century work “The Horse Fair,” a scene of semi-chaos as horses are driven to market. He tried to abide by Ms. Herman’s admonishment to avoid words like “obviously.” “It appears to be daytime, and the horses appear to be traveling from left to right.”

Another pair of officers tackled Picasso’s 1905 “At the Lapin Agile,” which depicts a wilted-looking couple sitting at a French bar after what might have been a long night out. “They appear to have had an altercation,” one observed. The other said, “The male and female look like they’re together, but the male looks like he’ll be sleeping on the couch.”

The officers asked that their names not be used because they were not authorized to speak to reporters. They said that they did not know much about art — their jobs allow little opportunity for recreational museumgoing — and Ms. Herman said she preferred it that way.

“I’ve had people say, ‘I hate art,’ and I say, ‘That’s not relevant,’” she said. “This is not a class about Pollock versus Picasso. I’m not teaching you about art today; I’m using art as a new set of data, to help you clear the slate and use the skills you use on the job. My goal when you walk out the door is that you’re thinking differently about the job.”

A painting has many functions. It’s a cultural artifact, an aesthetic object, an insight into a time and a place, a piece of commerce. To Ms. Herman, it’s also an invaluable repository of visual detail that can help shed light on, say, how to approach a murder scene. “It’s extremely evocative and perfect for critical inquiry,” she said in an interview. “What am I seeing here? How do I attach a narrative to it?”

Before unleashing the officers in the galleries, she talked to them in a classroom in the Met’s basement. She put up a slide of “Mrs. John Winthrop,” a 1773 portrait by John Singleton Copley. The painting, showing a woman sitting at a table holding little pieces of fruit, is considered a masterpiece of fine detail — the intricacy of the lace trim on the lady’s gown, the rich decorations on her hat. But there’s a detail that’s so obvious, or maybe so seemingly irrelevant, that most people fail to mention it in their description.

“Everyone sees that this is a woman with fruit, and 80 percent miss the mahogany table,” she said. (They also miss the woman’s reflection in the veneer.)

Ms. Herman also displayed a pair of slides featuring reclining nudes: Goya’s “The Nude Maja” (1797-1800) and Lucian Freud’s 1995 “Benefits Supervisor Sleeping,” who is very fat. Ms. Herman asked the group to compare the pictures. “Most cops, when I ask this question, say it shows someone before and after marriage,” she said.

“Uh, the woman at the bottom is more generously proportioned,” one said.

“She is morbidly obese,” said another.

Ms. Herman, who has a new book out, “Visual Intelligence: Sharpen Your Perception, Change Your Life,” came to her vocation in a roundabout way. She worked first as a lawyer, did not like it, took a job in the development office at the Brooklyn Museum and then moved to the Frick Collection. Earning a master’s degree in art history at night at Hunter College, she eventually became head of the Frick’s education department.

There, inspired by a program in which Yale medical students studied works of art to better observe their patients, she helped devise a similar program for the Frick. Eventually she moved beyond medicine. She has been offering the courses full time as her own business since 2011; her clients include federal and local law enforcement agencies across the country, as well as medical students and business executives.

Steve Dye, chief of police at the Grand Prairie Police Department in Texas, brought in Ms. Herman recently to talk to a group of officers from the region. He said her presentation was invaluable in showing the officers how to better observe and document their findings accurately and free from bias.

“Some of the works of art she showed us, we wouldn’t notice the finer details,” he said. “And we’re supposed to be professional observers.”

When forced to deconstruct paintings in group settings, people from different professions tend to respond differently.

“The law enforcement community is much more forthcoming,” Ms. Herman said. “Cops will outtalk you every time. Doctors and medical students are much more inhibited. They don’t want to be wrong, and they never want to show that they are ignorant about anything.”

The New York Police Department is one of Ms. Herman’s most important clients. She tailors her presentations to her audiences, and they are on the regular training curriculum at the detective bureau and the training bureau at the Police Academy; other divisions use her services from time to time. In general, her program is voluntary rather than mandatory.

“Amy reminds officers to explore outside the box,” said Police Officer Heather Totoro, who added that the program helped officers in training because of its “uniqueness and power.”

“She taps into officers’ unique sixth sense, teaching them to tell her what they see, not what they think.”

Law enforcement officials tend to view the works through the lens of the job: Who has done what to whom? Where is the perp?

“Sometimes they’ll say, ‘We have an E.D.P. here’ — an emotionally disturbed person,” Ms. Herman said. Once she showed some officers El Greco’s “The Purification of the Temple,” which depicts Jesus expelling the traders and money-changers amid turmoil and mayhem.

Among the works she finds most interesting as a learning tool is Vermeer’s exquisitely ambiguous “Mistress and Maid,” a 1666-7 portrait of a lady seated at a table, handing over (or being handed) a mysterious piece of paper. “There are so many different narratives,” she said. “The analysts come away asking more questions than answers — ‘Who’s asking the question? Who’s doing the talking? Who’s listening?’ The cops will say, ‘It’s a servant asking for the day off.’”

She also likes “House of Fire,” a 1981 painting by James Rosenquist that has three absurdist parts: an upside-down bag of groceries, a bucket under a window shade, and a group of aggressively thrusting lipsticks. “It’s really conducive to good dialogue,” she said. “How many times do officers have to make order out of chaos? So many times in our work we come across things that don’t have a coherent narrative.”

The officers in the class seemed impressed, both by Ms. Herman and by their grand surroundings.

One officer said that she had learned “how to sit down with colleagues and deal with the fact that you can perceive things so differently from each other.” It was her first trip to the Met, or indeed to any art museum.