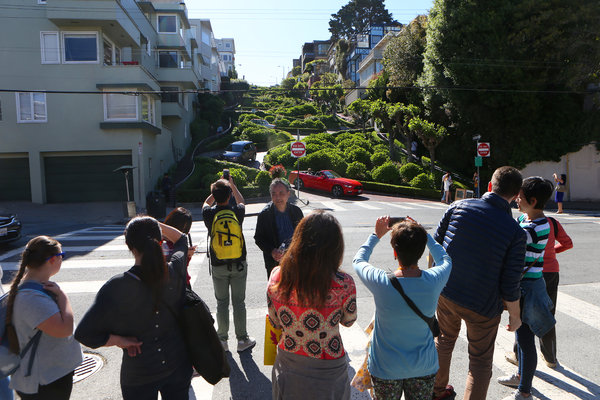 SAN FRANCISCO — From her apartment at the foot of the celebrated zigzags of Lombard Street, Judith Calson has twice peered out her window as thieves smashed their way into cars and snatched whatever they could. She has seen foreign tourists cry after cash and passports were stolen. She shudders when she recounts the story of the Thai tourist who was shot because he resisted thieves taking his camera.

And that is her tally from the last year alone.

“I never thought of this area as a high-crime neighborhood,” Ms. Calson, a retired photographer, said of this leafy part of the city, where tourists flock to view the steeply sloped, crooked street adorned with flower beds.

San Francisco, America’s boom town, is flooded with the cash of well-paid technology workers and record numbers of tourists. At the same time, the city has seen a sharp jump in property crime, up more than 60 percent since 2010, though the actual increase may be higher because many of the crimes go unreported.

Recent data from the F.B.I. show that San Francisco has the highest per-capita property crime rate of the nation’s top 50 cities. About half the cases here are thefts from vehicles, smash-and-grabs that scatter glittering broken glass onto the sidewalks.

The city, known for a political tradition of empathy for the downtrodden, is now divided over whether to respond with more muscular law enforcement or stick to its forgiving attitudes.

The Chamber of Commerce and the tourist board are calling for harsher measures to improve what is euphemistically called the “condition of the streets,” a term that encompasses the intractable homeless problem, public intravenous drug use, the large population of mentally ill people on the streets and aggressive panhandling. The chamber recently released the results of an opinion poll that showed that homelessness and “street behavior” were the primary concerns of residents here.

“People believe that everyone has the right to be on the streets. However, I think there is a tolerance limit to bad behavior.”

Visitors come to bask in the Mediterranean climate, stroll through the charming streets and marvel at the sweeping views of the bay and the Pacific. But alongside those views are tent encampments on sidewalks and rag-covered homeless people in front of some of the most expensive real estate in America.

The divided opinions on how to handle the problems are evident among members of the Board of Supervisors.

Scott Wiener, a supervisor and an advocate for more aggressive law enforcement, said his constituents were urging him to act. “I can’t tell you the number of times where I have received emails from moms saying, ‘My kids just asked me why that man has a syringe sticking out of his arm,’ ” he said.

“San Francisco at times is a consequence-free zone,” Mr. Wiener said. “I’m not advocating extreme law and order, but there has to be consequences. Sometimes people might need to spend six months in jail to think about what they did.”

In a bitterly contested 6-to-5 vote last year, Mr. Wiener led the passage of a measure adding several hundred officers to the city’s police force, the first increase since the 1980s, when the population was over 10 percent smaller.

On the other side is David Campos, a supervisor who opposes the increase in police officers and describes Mr. Wiener’s views as “a very knee-jerk kind of punitive approach that is ineffective and inconsistent with the values of San Francisco.”

Mr. Campos and many others evoke the charitable spirit of the city’s namesake, St. Francis.

“We are not going to criminalize people for being poor,” he said. “That criminalization is only going to make it harder for them to get out of poverty.”

San Francisco’s liberal ethos, Mr. Campos said, was changing as the city focused more on business and the needs of the tech industry.

“I think there has been a shift in the people who have come to San Francisco,” Mr. Campos said of the city’s new arrivals, a group that is well educated and well heeled. He deplores what he describes as a growing “sink-or-swim” free-market ideology that stands in contrast to the city’s traditions.

“I don’t know which San Francisco will prevail,” he said.

At TLC Glass, a repair shop on the edge of San Francisco’s business district, the more prosaic consequences of the rise in car break-ins are on display. Customers regularly file in to repair car windows that have been smashed by thieves.

“Every day we are full,” the shop’s owner, Louie Chen, said. One customer came in four times in six weeks.

A customer who came to have a broken window fixed, Dan Edmonds-Waters, showed San Franciscan forgiveness. He said he felt sorry for whoever broke a window of his limited-edition BMW twice, stealing his gym bag both times.

“I have a lot of sympathy for folks who are in need in the city,” Mr. Edmonds-Waters said. “This has become an extremely expensive city to live in. The divide between those who have and those who don’t is ridiculously ginormous.”

The people who commit the property crimes come from a variety of backgrounds, said Albie Esparza, a spokesman for the San Francisco Police Department. “Some are homeless, some are in gangs, some are freelancers up to no good,” he said.

People are rarely caught. “The problem with auto break-ins is that they happen so quickly, just a few seconds,” Mr. Esparza said. “Before anyone can do anything about it, they are long gone.”

Violent crime has increased 18 percent since 2010, but the city has a low murder rate relative to other large American cities.

Police are barred by city ordinance from installing surveillance cameras that are commonly found in other cities, a restriction that even Mr. Wiener said he did not want changed.

Ms. Calson, the retired photographer, said she offered to let the police mount a surveillance camera outside her Lombard Street apartment. The car break-ins happen so quickly that she has not been able photograph the perpetrators.

On Wednesday, another car was broken into below her window. A woman who was dropping off her daughter at a day care center had parked for 10 minutes and returned to find her window smashed and her purse gone.