How the Novelist Douglas Kennedy Spends His Sundays – NYTimes.com
http://mobile.nytimes.com/2016/03/27/nyregion/how-the-novelist-douglas-kennedy-spends-his-sundays.html?_r=0 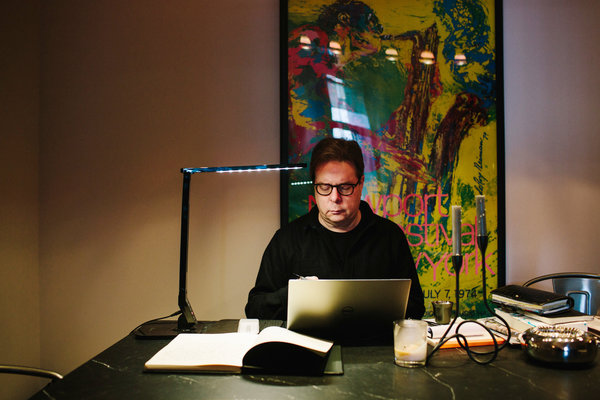 Douglas Kennedy, a novelist from New York who is very popular in France, was back in town recently after some time away, and he took note of the things that made him feel at home. “It’s such a vocal, loud place,” he said. “Coming out of the subway the other day, I heard a cabdriver having an argument with someone, and he said, ‘Are you dumb or just stupid?’ I hear that and feel I’m home.” Mr. Kennedy, 61, spends much of the year in Europe and Maine, or commuting to Montreal, where his wife, Christine Ury, a psychoanalyst, lives and works. His home in New York is an apartment in Koreatown. His latest book, “The Blue Hour,” is a smash you know where.

SOFT OPENING I sleep till at least 11 or 12. I’m a jazz junkie, so I’m usually out quite late on Saturday night, at somewhere like Smoke up by Columbia on 106th and Broadway. That’s one of the last clubs in the business that goes until 3 in the morning. I usually close the place down.

SOUL I always start with an espresso. Like a lot of ex-smokers, I’m a caffeine addict. I always put on music immediately. I’m very much a radio person. So I probably will tune in to Radio 3 from London or a very, very good program of ecclesiastical music on KUSC, from Southern California, called “Soul Music.” I’m not a religious person at all, but I have a great interest in ecclesiastical music. There’s a program from Australia called “For the God Who Sings.” I find that listening to a Bach cantata or one of William Byrd’s masses, some work by Thomas Tallis, it’s very fitting for Sunday morning. I like the calm it engenders.

IMPORTED BAGELS Then I will have a long 90 minutes or so with the paper and with a proper brunch. I will scramble eggs; I will have a proper bagel with cream cheese. I will have a Bloody Mary. Because my wife is a Montrealer, she’s incredibly snobbish about bagels. She always brings down a couple of bags. I know it’s a sacrilege for a New Yorker to say this, but they’re very good. I usually have them in my freezer.

THE EXERCISE PROCESS I will try by about 2 o’clock to get to the gym. It reminds me a lot of writing. I really hate getting there and starting the process, but once I’m into it it’s relatively pleasing and I like the result.

SANCTUARY Normally I will stroll up Fifth Ave to 53rd Street, and there is St. Thomas’s. It’s a wonderful gothic pile of a place. Listening to an absolutely sublime choir and a great organist and a bit of Anglican ritual thrown in — I think that what I love about the Anglican tradition is that it’s aesthetically so beautiful. What is wonderful about spending an hour in a church, even if you are not a believer, is the sense that you are trying to deal with larger mysteries, for which there are no answers. But you’re also, on another level, just shutting yourself off from the world at large for an hour. I don’t have to deal with the transubstantiation of the spirit or God with a large G.

DEEP DIVE I like to go to a play on Sunday, and then to the Village Vanguard. It’s a lot of culture, but this is why I live here. If I’m going to the Vanguard, I have to eat before, so it’ll be at 5:30. I prefer eating later. In Madrid most people are finishing lunch then. This Sunday I’m going to Porsena.

SHRINE At the Vanguard I like to sit up front by the piano, or in the raised section stage left. The Vanguard for me, when it comes to jazz joints in New York, it is the holy of holies. It’s the Carnegie Hall of jazz, as the great Fred Hersch called it. It’s that same basement room I’ve been going to for over 40 years. It’s an intensely serious place. There’s no food served, just booze, and it’s a real music crowd.

A CIGAR A DAY After that usually I will walk home. I can do that in about 30 minutes. And I try to smoke one decent cigar a day. Not Cuban, but I will smoke a nice Romeo y Julieta from the Dominican Republic.

SHUTTING DOWN I’ve never fallen asleep easily. Sleep is difficult, and I’ve always had to take medication for that. I said to my doctor recently, Should I get off it? He said, Why? Writers have very active minds, and insomnia with writers is manifest everywhere.