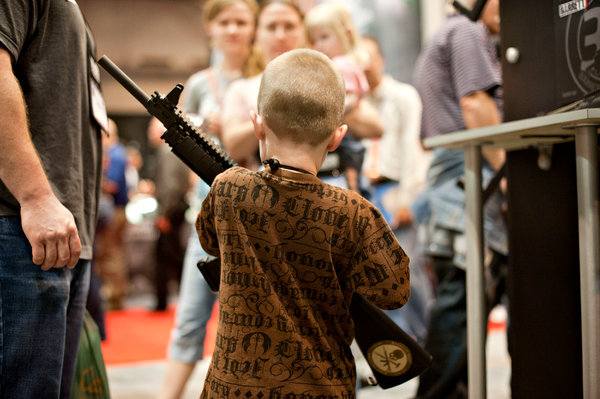 The world of make-believe can be a scary place, but never fear: Thanks to a series of reimagined fairy tales published online by the National Rifle Association, classic characters like Hansel and Gretel are now packing heat.

The group has published two of the updated tales on its N.R.A. Family website in recent months, entitled “Little Red Riding Hood (Has a Gun)” and “Hansel and Gretel (Have Guns).” The stories have outraged advocates of gun control, but their author, Amelia Hamilton, a conservative blogger, has called them lessons in gun safety.

“The stories are really also for adults, and it’s all about safety,” Ms. Hamilton said in an interview on “CBS This Morning” on Friday. “It’s for parents to start those conversations.”

N.R.A. Family asked its readers in an editor’s note if the dark overtones of the original fairy tales — an old woman eaten by a wolf and children cooked by a witch — ever made them “uneasy.” It said the new versions are meant to make the Grimm brothers’ tales less grim.

In Ms. Hamilton’s stories, each of the young protagonists (and one grandmother) is transformed from a victim into a hero with the help of a gun.

Ladd Everitt, a spokesman for the Coalition to Stop Gun Violence, said that depiction was a source of concern.

“There are no consequences for the children here holding guns, walking out into the woods with guns, thinking about killing the bad guys,” he said. “Children who might read these stories do not have the emotional maturity to understand that gun ownership does come with risks.”

In the N.R.A. version, Little Red Riding Hood set off through the forest to visit her grandmother, just like in the original. But the Big Bad Wolf did not scare her this time, because she “felt the reassuring weight of the rifle on her shoulder.”

When the wolf approached her, “she shifted her rifle so that it was in her hands and at the ready.” He fled in fear.

Grandma, too, was saved by a gun. While distracting the wolf with compliments about the size of his eyes and ears, she slowly reached for her weapon.

“The wolf leaned in, jaws open wide, then stopped suddenly,” Ms. Hamilton wrote. “Those big ears heard the unmistakable sound of a shotgun’s safety being clicked off. Those big eyes looked down and saw that grandma had a scattergun aimed right at him.”

Hansel and Gretel got a similar treatment. The story began with them hunting in the woods, eventually bagging “a magnificent 10-point buck,” when they stumble upon a gingerbread cottage where two little boys were imprisoned by a witch.

The siblings climbed through the cottage’s windows and rescued the boys while the witch slept in the next room. As Hansel unlocked their cage, his sister “stood at the ready with her firearm just in case, for she was a better shot than her brother.”

When they returned home the next morning, the children told the parents about the witch and soon, “Villagers, prepared with rifles and pistols, headed into the forest, Hansel and Gretel leading the way.” The witch was locked up by local law enforcement, and then everyone ate her house.

Efforts to reach Ms. Hamilton on Friday were unsuccessful. In an interview with N.R.A. News, she said her versions were “kinder” than the originals by the Grimm brothers because no grandmothers or children were eaten and, despite the guns, the villains were not shot. “The kids do just what they are supposed to do and get an adult,” she said.

Mr. Everitt of the Coalition to Stop Gun Violence compared the modified fairy tales to other N.R.A.-produced fare aimed at young people, such as “Noir,” a program on N.R.A. News starring Colion Noir, a young African-American gun enthusiast who shoots guns and delivers monologues on the importance of the Second Amendment against a hip-hop soundtrack.

“The intent here is to create future customers” for the gun industry, said Mr. Everitt. “I think it is wholly a marketing thing.”

Dan Gross, the president of the Brady Campaign to Prevent Gun Violence, agreed, calling the stories “a disgusting, morally depraved marketing campaign.” He said in a statement that the stories were in poor taste in part because nearly 50 children and teenagers are shot each day in the United States, and suicide by gun is a leading cause of death among children over the age of 9.

She has also announced plans for her next fairy tale: The Three Little Pigs, with guns, will be published on the N.R.A. Family website in May.