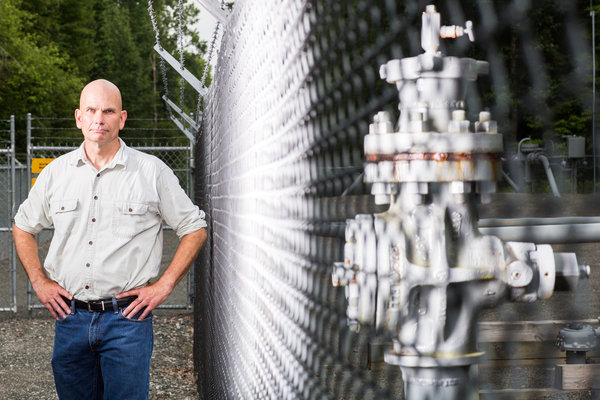 A device commonly used to measure the methane that leaks from industrial sources may greatly underestimate those emissions, said an inventor of the technology that the device relies on.

The claim, published Tuesday in a peer-reviewed scientific journal, suggests that the amount of escaped methane, a potent greenhouse gas, could be far greater than accepted estimates from scientists, industry and regulators.

The new paper focuses on a much-heralded report sponsored by the Environmental Defense Fund and published by University of Texas researchers in 2013; that report is part of a major effort to accurately measure the methane problem. But if the supposed flaws are borne out, the finding could also have implications for all segments of the natural gas supply chain, with ripple effects on predictions of the rate of climate change, and for efforts and policies meant to combat it.

Almost all of the methane leakage calculated from the Texas research “could be affected by this measurement failure,” according to the paper; “their study appears to have systematically underestimated emissions.”

The new paper describes a pattern of low measurements of leaks by the Bacharach Hi Flow Sampler, a device approved by the Environmental Protection Agency for its required monitoring of natural gas facilities and in use around the world.

The problem, according to the author of the paper, Touché Howard, is that the backpack-size tool uses two sensors: one for low levels of methane emissions and one for higher levels. As methane levels rise beyond the capacity of the first sensor, the device hands off to the second, high-level sensor.

Mr. Howard found that under some conditions, unless the sampler is carefully and frequently recalibrated, the switchover from the first sampler to the second can fail. When that occurs, the device does not measure the amount of methane that the second sensor would capture, and so it underrecords methane leakage rates.

Mr. Howard, a semiretired gas industry consultant and firefighter who lives in North Carolina, holds the patent for a high-flow-rate sampler whose technology is used in the Bacharach product.

Complicating the issue, he wrote, is that when the device malfunctions, “there is no way to determine the magnitude” of the error without independent measurement at the time, so the missed emissions could be extremely high — perhaps tenfold to a hundredfold for a particularly large leak, he said. Researchers have found that a relatively small number of leaks produce most escaped methane, he wrote, so an instrument that underreports large leaks might skew official assessments like the E.P.A.’s overall methane inventory. Mistakenly low leak readings could also create safety issues in industrial settings, he noted.

“That such an obvious problem could escape notice in this high-profile, landmark study highlights the need for increased vigilance in all aspects of quality assurance” for all methane measurement programs, he wrote.

The paper appears in the journal Energy Science & Engineering.

The Texas study, the first of 16 reports on methane emissions sponsored by the Environmental Defense Fund, measured emissions at 190 natural gas production sites.

The lead author of the Texas study, Prof. David T. Allen, stood by his work. “There may be issues with some of these instruments, but we tested our instruments pretty thoroughly and when we went out into the field we had multiple instruments, all of which gave us information,” he said. Alternate measurement methods were used at some sites, he said, and “we didn’t see any evidence that we were missing any large numbers.”

The maker of the instrument, Bacharach, reviewed Mr. Howard’s new paper, along with one he co-wrote earlier this year. It issued a statement that the sampler, first produced in 2003, was initially tested and validated with gas streams that are not the same as those in the study, which involved high levels of the class of chemicals known as volatile organic compounds.

Even so, the company stated, “we believe that some of the primary test results and conclusion” of the studies “are not valid” because the sensor failures reported by Mr. Howard could be caused by other factors. The company suggested frequent recalibration of the device, and said it would update operating manuals; it also recommended further testing.

A spokeswoman for the E.P.A. said the agency would assess information “from a number of channels,” including the research community and industry and the new Howard paper, “as a part of our routine review of new information” for its annual inventory of greenhouse gases.

Methane is the main component of natural gas, and the expansion of techniques such as hydraulic fracturing, known as fracking, has greatly increased the amount of natural gas being extracted, sold and transported around the country. This shift has been widely hailed as environmentally helpful, to the extent that more reliance on natural gas to generate electricity means less reliance on coal and thus smaller amounts of carbon dioxide and other pollutants being pumped into the atmosphere.

Even so, burning natural gas produces some carbon dioxide, and the process of extracting and transporting it inevitably leads to some leakage. Methane has powerful short-term effects on climate change — by some estimates, 80 times the heating effects of carbon dioxide in the first 20 years in the atmosphere — though it breaks down far more quickly than carbon dioxide does.

The Obama administration has lauded the expansion of natural gas as an alternative to coal, but has also called for industry action to sharply reduce leaks while promoting renewable energy sources like solar and wind power.

An expert on methane, Robert Howarth of Cornell University, said he found Mr. Howard’s paper “very compelling.” Professor Howarth was not involved in the research but has long argued that official estimates of methane emissions are far too low.

Mr. Howard said that before he wrote his paper for the scientific journal, he shared his findings about the sampler with the Environmental Defense Fund and Professor Allen. He said he felt that his concerns were given short shrift, and that early agreements to work together on addressing the issue were brushed aside. “In my opinion, there’s been some real stonewalling going on,” he said.

Professor Allen said in response that “our research team made efforts to cooperate with Mr. Howard,” adding that he was reluctant to discuss “issues like nondisclosure agreements, email communications, and other university legal matters.” A spokesman for the university, Geoffrey Leavenworth, said that communications with Mr. Howard ceased after disagreements over a standard nondisclosure form.

An official of the Environmental Defense Fund said the organization welcomed the new paper. “We’re happy when people read these papers, critique them, raise questions about the instruments used, the methodology used,” said Mark Brownstein, who leads the group’s work on methane emissions.

Other papers in the group’s methane series, including a recent study about leaks in the Barnett shale field in Texas, have found far greater emissions of methane than estimated by the E.P.A., he noted, and the studies should be seen as a whole.

The important point, Mr. Brownstein said, is that research shows that relatively inexpensive measures can sharply reduce emissions, however high they turn out to be. “The bottom line is the question is, ‘Are emissions high, or are they higher?’ Either way, the focus needs to be on reducing them. That’s where we come in.”

An earlier version of a headline with this article misidentified the measurement challenged by a new report in the journal Energy Science & Engineering. It is methane leaks, not methane in the atmosphere.