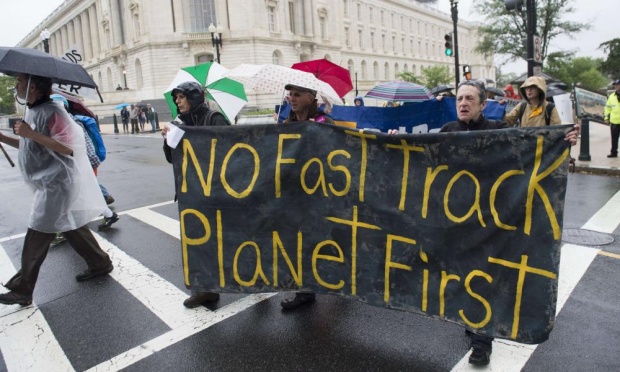 A decade in the making, the controversial Trans-Pacific Partnership (TPP) is reaching its climax and as Congress hotly debates the biggest trade deal in a generation, its backers have turned on the cash spigot in the hopes of getting it passed.

“We’re very much in the endgame,” US trade representative Michael Froman told reporters over the weekend at a meeting of the 21-member Asia-Pacific Economic Cooperation forum on the resort island of Boracay. His comments came days after TPP passed another crucial vote in the Senate.

That vote, to give Barack Obama the authority to speed the bill through Congress, comes as the president’s own supporters, senior economists and a host of activists have lobbied against a pact they argue will favor big business but harm US jobs, fail to secure better conditions for workers overseas and undermine free speech online.

Those critics are unlikely to be silenced by an analysis of the sudden flood of money it took to push the pact over its latest hurdle.

Fast-tracking the TPP, meaning its passage through Congress without having its contents available for debate or amendments, was only possible after lots of corporate money exchanged hands with senators. The US Senate passed Trade Promotion Authority (TPA) – the fast-tracking bill – by a 65-33 margin on 14 May. Last Thursday, the Senate voted 62-38 to bring the debate on TPA to a close.

Those impressive majorities follow months of behind-the-scenes wheeling and dealing by the world’s most well-heeled multinational corporations with just a handful of holdouts.

Using data from the Federal Election Commission, this chart shows all donations that corporate members of the US Business Coalition for TPP made to US Senate campaigns between January and March 2015, when fast-tracking the TPP was being debated in the Senate:

The amounts given rise dramatically when looking at how much each senator running for re-election received.

Two days before the fast-track vote, Obama was a few votes shy of having the filibuster-proof majority he needed. Ron Wyden and seven other Senate Democrats announced they were on the fence on 12 May, distinguishing themselves from the Senate’s 54 Republicans and handful of Democrats as the votes to sway.

“It’s a rare thing for members of Congress to go against the money these days,” said Mansur Gidfar, spokesman for the anti-corruption group Represent.Us. “They know exactly which special interests they need to keep happy if they want to fund their reelection campaigns or secure a future job as a lobbyist.

“How can we expect politicians who routinely receive campaign money, lucrative job offers, and lavish gifts from special interests to make impartial decisions that directly affect those same special interests?” Gidfar said. “As long as this kind of transparently corrupt behavior remains legal, we won’t have a government that truly represents the people.”