‘Rise of the Robots’ and ‘Shadow Work’ – NYTimes.com
http://mobile.nytimes.com/2015/05/17/books/review/rise-of-the-robots-and-shadow-work.html?referrer= 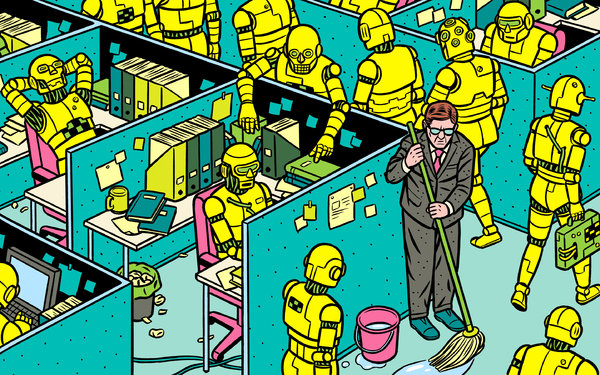 In the late 20th century, while the blue-collar working class gave way to the forces of globalization and automation, the educated elite looked on with benign condescension. Too bad for those people whose jobs were mindless enough to be taken over by third world teenagers or, more humiliatingly, machines. The solution, pretty much agreed upon across the political spectrum, was education. Americans had to become intellectually nimble enough to keep ahead of the job-destroying trends unleashed by technology, both robotization and the telecommunication systems that make outsourcing possible. Anyone who wanted a spot in the middle class would have to possess a college degree — as well as flexibility, creativity and a continually upgraded skill set.

But, as Martin Ford documents in “Rise of the Robots,” the job-eating maw of technology now threatens even the nimblest and most expensively educated. Lawyers, radiologists and software designers, among others, have seen their work evaporate to India or China. Tasks that would seem to require a distinctively human capacity for nuance are increasingly assigned to algorithms, like the ones currently being introduced to grade essays on college exams. Particularly terrifying to me, computer programs can now write clear, publishable articles, and, as Ford reports, Wired magazine quotes an expert’s prediction that within about a decade 90 percent of news articles will be computer-­generated.

It’s impossible to read “Rise of the Robots” — for review anyway — without thinking about how the business of book reviewing could itself be automated and possibly improved by computers. First, the job of “close reading,” now commonly undertaken with Post-its and a felt-tip red pen, will be handed off to a scanner that will instantly note all recurring words, phrases and themes. Next, where a human reviewer racks her brain for social and historical context, the review-bot will send algorithms out into the ether to scan every other book by the author as well as every other book or article on the subject. Finally, all this information will be synthesized with more fairness and erudition than any wet, carbon-based thinking apparatus could muster. Most of this could be achieved today, though, as Ford notes, if you want more creativity and self-­reflexivity from your review-bot, you may have to wait until 2050.

This is both a humbling book and, in the best sense, a humble one. Ford, a software entrepreneur who both understands the technology and has made a thorough study of its economic consequences, never succumbs to the obvious temptation to overdramatize or exaggerate. In fact, he has little to say about one of the most ominous arenas for automation — the military, where not only are pilots being replaced by drones, but robots like the ones that now defuse bombs are being readied for deployment as infantry. Nor does Ford venture much into the spectacular possibilities being opened up by wearable medical devices, which can already monitor just about any kind of biometric data that can be collected in an I.C.U. Human health workers may eventually be cut out of the loop, as tiny devices to sense blood glucose levels, for example, learn how to signal other tiny implanted devices to release insulin.