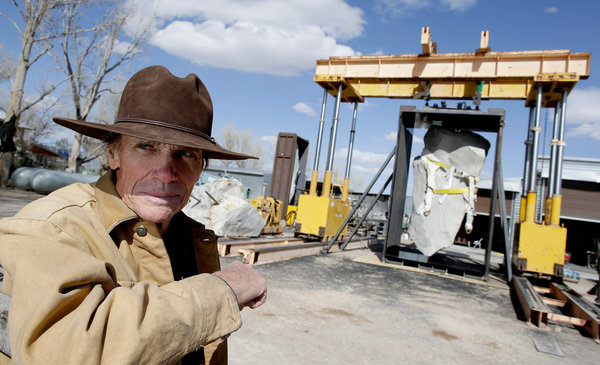 GARDEN VALLEY, NEV. — One breezy spring day last month, I drove back here to see Michael Heizer at his desert ranch, a compound bordered by cottonwoods and alfalfa. “If you’ve even been in a field of alfalfa with the meadowlarks and the rabbits and the kingbirds,” he said, “well, that’s a God moment. You haven’t lived until then. It’s what has kept me alive.”

He was dressed, as usual, in a cowboy hat, canvas jacket and old plaid shirt, surrounded by gurneys and electric saws, mulling over logistics with a small crew of grizzled workmen. The task at hand: encasing a giant, potato-chip-shaped 18-ton rock, excavated from the Mojave Desert, inside a 12-ton steel frame. The rock was to be hauled 2,500 miles east to Larry Gagosian’s gallery on West 24th Street, where he is having his first show in New York in nearly two decades.

I also wanted to catch up on “City,” the abstract sculpture that he has been working on since the early 1970s, and which I hadn’t seen in 10 years. It may be the most ambitious sculpture anyone has ever built, one of those audacious, improbable American dreams, at the scale of the West, conceived for the ages. More than a mile long, “City” is a kind of modern Chichen Itza in the midst of Garden Valley, a pristine, lunar stretch of stark and unspeakable beauty, an hour’s bumpy drive from the nearest paved road.

With the Gagosian show, which almost sold out on opening night, and “City” finally nearing completion, Mike, at 70, is reclaiming the limelight. A few years ago he became a passing celebrity when he installed “Levitated Mass,” a 340-ton boulder excavated from a quarry in California, above a concrete trench in the sculpture garden at the Los Angeles County Museum of Art. The giant boulder’s laborious 106-mile trek, artfully managed by the museum, brought out crowds of rubberneckers and became the subject of a popular documentary that introduced many people to Mike.

Now he finds his life’s work, not for the first time, teetering between oblivion and immortality. Some years ago, federal lawmakers floated a plan to collect all the nation’s nuclear waste at nearby Yucca Mountain via a rail line that would have been constructed through Garden Valley, right next to “City.” Distraught, Mike contemplated demolishing the sculpture before Congressional opponents mothballed the nuclear plan.

But bids followed to prospect for oil and minerals. Legislation to protect the area, including Coal Valley next door, was subsequently introduced by Senator Harry Reid, Democrat of Nevada, and languished in Congress, opposed by Republicans.

So now Senator Reid, who clearly regards this as part of his own legacy, has appealed to President Obama to declare the whole territory — some three-quarters of a million acres, including Garden and Coal Valleys as well as “City” — the Basin and Range National Monument. “I was not raised in the mountains; I was raised in the Nevada desert where there’s no water, few animals and the landscape is harsh but beautiful,” Senator Reid told me by phone. “This is that sort of place. There’s nowhere in the state of Nevada more representative. When I first saw it, I felt at home.”

Predictably, it’s become a partisan issue. Representative Cresent Hardy, a Nevada Republican, in a statement this month declared himself “appalled” by the monument idea, which, he said, would have “national security implications,” affecting aircraft sorties from the Nevada Test and Training Range. Kristen Orthman, a spokeswoman for Senator Reid, swiftly dismissed that claim as “short on actual facts.”

For Mike — for anyone who prizes the magisterial landscape of the American west and dreamers like him — more than the fate of his sculpture hangs in the balance. He designed “City” to disappear into the landscape, using the soil and rocks already there to build it and blend it into Garden Valley. From even up close it hides behind berms, a speck in the yawning vastness, against a snow-capped mountain backdrop. To appreciate its immensity, you have to enter into “City,” to drop down into its own valleys, and look back up at the sky and see its shapes in relation to the mountains. The connection between art and nature is palpable. Driving across Coal and Garden Valleys to the ranch is integral to the experience of “City.” Protecting the whole area seems a no-brainer, a gift to future generations.

“Why in the world wouldn’t we protect this place?” is how Senator Reid put it.

Wiry, hawkish and brimming with big ideas, Mike came onto the scene during the late 1960s and early ’70s, moving American art outdoors, digging holes in the Sierra Nevada, cutting trenches in the desert, blasting a 1,500-foot-long, 50-foot-deep gash into the facing slopes of a mesa to create “Double Negative,” an instant landmark of the newly christened Earth Art. Mike designated it “negative sculpture” because the work consisted of the empty space left behind by removing 240,000 tons of rock.

He had already started buying acres in Garden Valley by the early ’70s, with the idea of making a modernist complex of abstract mounds, prismoids, arenas, ramps and pits, partly derived from ancient Mesoamerica, which his father, an anthropologist and archaeologist, excavated. It was a herculean ambition that soon sent Michael down the rabbit hole. Too big and costly for one man, the project stalled, the money dried up, the art world moved on.

Then Michael Govan, at the time the director of the Dia Art Foundation, now the director of the Los Angeles County Museum of Art, came to the rescue. If there’s a hero in this story, it is Mr. Govan, as the artist is quick to point out. Mr. Govan has spent the last 20 years overseeing construction, raising millions of dollars for “City” (he estimates the cost has reached $17 million) and campaigning for its protection, entreating Senator Reid and others. He also drove Mr. Gagosian to the ranch two years ago to introduce him to Mike, who hadn’t had a regular dealer in years and now had more time for new projects. Mr. Gagosian joked afterward that Mr. Govan needed to warn him the next time he planned to venture that far out of cellphone range. He also said he would take Mike on.

For his part, Mike said he’d come to New York to install the show only if he could bring his Border collie, Tomato Rose.

On view until July 2, the show includes several rocks, a room of abstract paintings from the 1960s and immense new painted steel sculptures that hark back to work Mike did during the ’70s. The stones are negative sculptures, he explained, because they consist of holes in walls, “voids,” as he called them, “that are then replaced with rocks, a very simple idea, maybe too simple. But what is the essence of sculpture except taking an object and leaning it, or standing it up or laying it down, all simple but profound moves?”

Some 40 feet long, the steel sculptures are painted white or black with an aircraft coating that can make the black ones partly resemble polished grand pianos. The white ones are covered with stencil-painted enlargements of digital drawings and silkscreens of photographs that Mike developed with his wife, Mary Shanahan, also an artist.

All the sculptures are arrayed, somewhere just above or below eye level, like offerings on stepped pedestals that Mike calls altars. The shapes describe a cryptic alphabet summoning to mind bones, tools, hieroglyphs or cattle brands (he raises cows and bulls on the ranch). They also resemble forms in the landscape, abstracted and akin to the shapes at “City.”

Of “City,” Mr. Govan waxed metaphysical: “It epitomizes a fusion of ancient and modern forms. It’s huge in size, but antimonumental in its relentless horizontality and its sinuous, continuous curves. It’s also unphotographable and impossible to capture in its totality. It has to be experienced in time and space — over time, and distance.”

The same, on a smaller scale, could be said of the sculptures at Gagosian.

“You also find these shapes in Siberia, in California, Mexico,” Mike said. “They’re in petroglyphs you can find just up the road from here. I call the sculptures altars because art by its nature is spiritual, whether it’s made by some guy in a cave praying for a mastodon or somebody doing what the Vatican wants. I look up at the stars at night. You can have a very profound religious experience doing that, I assure you, and I don’t mean institutional religion. The sculpture business is a good way to sneak this sort of information into a public conversation.”

He added, “Doing this work was the most fun I ever had making art.”

I started visiting Mike periodically in the mid-1990s, and wrote about him a few times, but lost touch over the years. Not long ago he nearly died, weaning himself from painkillers for a nerve disease that, across several decades, has left his body broken. Building “City,” he said, almost killed him, too.

With more construction to be done, including an access road and a possible visitors center, the sculpture won’t be unveiled for a few years. Even so, “I can die today knowing it is basically done,” he said. Wraithlike now, slow to move, but energized by his recent successes, he seemed gentler than I remembered, more circumspect and wistful. He nodded hello when I arrived and replied to a casual “How’s it going?” with some news I had already heard, that Mary had moved out. He choked over the words, bowing his head slightly so the wide brim of the cowboy hat obscured his face. There is no small talk with him. We stood together in silence for a few seconds, listening to the wind blow through the piñon and poplars.

He led me into his studio and pulled heavy stacks of technical drawings and other preparatory materials for the Gagosian sculptures from overstuffed flat files. “This is serious engineering,” he said. “Mary did all of this. She made all these stencils; she put her genius into this work. This is her work, too. Look at these drawings. They’re amazing. She did all of this before she escaped her husband.”

I went off to explore the sculpture, hiking up new mounds, looking down onto what resemble empty arenas or dirt tracks, their outlines cut at sharp angles by crisp concrete curbs, and gazing up at giant walls of textured dirt, like lava flows. Light and shadows passed over the valley. I noticed echoes of some of the manufactured shapes in the mountains.

“In the end I’m lucky it took this long,” Mike said when I returned. “Over the years we saw how the thing stood the test of time, what didn’t work, what had to be rebuilt, what happened when the valley flooded, in different climates. It’s like a handmade object now, erased, redone, adjusted, not just fabricated. It’s part of nature, here for the millennia.”

“I stuck with it because I started it,” he added, answering a question I didn’t ask. “I’m surprised I don’t hate it, too. Even with all the stuff happening to me, I’m happy now, actually happy.”

He mulled over that thought for a second and smiled. “It’s about time.”