Rose Pak, endorsing Peskin, calls the mayor “isolated” and says all he cares about is tech money as D3 campaign moves into full gear 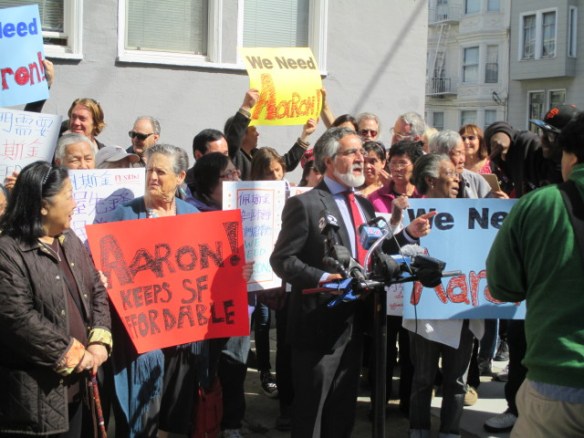 APRIL 30, 2015 – Former Sup. Aaron Peskin launched his campaign to reclaim his old District 3 seat today, showcasing a broad range or supporters including Rose Pak, the Chinatown activist and power broker who has clashed with Peskin repeatedly in the past – but who told me today she is bitterly angry with the way Mayor Ed Lee is behaving in office.

The formal announcement, which everyone had been expecting, kicks of what is certain to be a bruising campaign that will showcase the growing schism in the Lee Administration.

Now he has to prove his hand-picked supe, who is unpopular with his old base, can get re-elected – and his record on that isn’t good. His first supervisorial appointment, Christina Olague, was defeated by London Breed in D5, and his appointment to the Community College Board, Rodrigo Santos, lost not once but twice at the ballot.

And while Lee is personally popular, polls consistently show that the voters are unhappy with the direction the city is going, particularly on housing, development, and land-use – all critical issues in D3, and all areas where Peskin has more than 20 years of experience. 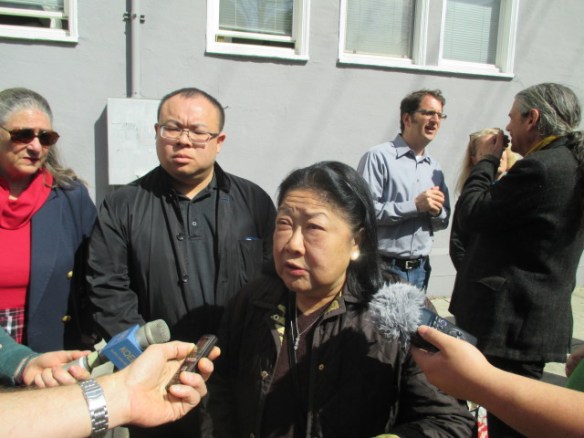 Rose Pak, who helped put Ed Lee in office, told reporters he is “isolated” and listens only to tech money

Peskin chose the site of the Lee family eviction to hold his first formal campaign event – and Mrs. Lee joined him. “It was not my plan to run again for office,” he said. “But small businesses, artists, tenants, even legacy businesses are being forced out of town. … Last year alone, 2,000 tenants were evicted. Of 14,480 housing units approved or in the pipeline for construction, only 839 are afford able to the middle class, and that’s less than six percent.

“The facts are stunning and frightening.”

It was a stark comparison to the statements Christensen made in a profile in the Examiner Sunday. Not once in the interview did she use the word “crisis” to discuss the housing situation. Not once did she show any concern that the fabric of the city was being torn apart. She just talked about “unity.”

Peskin, on the other hand, spoke of “a time of unprecedented crisis,” and said he wants to mandate that all new housing is at least one-third affordable and fix the flawed Airbnb legislation that is allowing short-term rental platforms to “illegally steal affordable housing.”

There were no elected officials at the event, which would normally signal that a candidate with so many connections at City Hall is in trouble. But that was by design – the kickoff was Aaron Peskin of old, the neighborhood activist and defender, not Aaron Peskin the powerful politician. He will eventually wind up with a long list of current and former elected officials and organizations.

He was also careful not to trash Lee or Christensen. “I’ve known Ed Lee for many years, and I know we can work together,” he told reporters. That’s a positive campaign approach that will be hard to maintain down the stretch: It’s absolutely certain that Conway will raise money (or just write a check) for an expensive independent-expenditure campaign to trash Peskin.

But while you can call him “bombastic” (as the Chron did today), he’s been in office too long for anyone to find any dirt that would come as a surprise to any constituent. At some point, though, the IE will stretch and try to smear him – and at some point, he will have to respond.

Today, though, all upbeat, all about policy, all good vibes from Aaron. Not so much from Rose Pak.

A bunch of us talked to Pak after the event, and she was, as always, not shy with her opinions. I asked her if she had read the Examiner story, in which Christensen says she’s the only person qualified for the job. “What makes her qualified?” Pak asked. “She is of the upper class and we are of the lower class.”

I told her that a lot of us were hearing that the mayor has abandoned his former allies (including Pak) and shifted his allegiance over to Conway and the Technorati. “That’s 100 percent true,” she said. “It’s all about the tech people. He’s so isolated now. I don’t think he ever takes a break to think about where he came from.”

More: “How do you find equity and fairness here? It’s obscene when someone can write a personal check for $500,000 and swing an Assembly race.”

Now let us remember: Rose Pak is not a foe of wealth or development. She’s been connected to a lot of big-money projects, including some that Peskin fought, and she said she is still going to support Lee for mayor because “he is running unopposed, and he’s going to be the next mayor.”

But her remarks are not in any way unique. All across the tenant and community bases where Ed Lee once had, if not support at least acquiescence, people are furious and demanding change.

I was riding the 49 bus back to Bernal Heights after the event, and talking with a Peskin supporter about the event, and a middle-aged African-American man sat next to me, introduced himself, and told me that he hadn’t know the former D3 supe was back in the game.

“But that’s my district,” he said, “and I’ll be voting for him. This mayor is just awful. I’ve lived in my apartment for more than 20 years, and I’m just waiting for the eviction notice to show up any day. We just can’t take it anymore.”