I saw this image on my friend Tuffy’s Facebook page. He had taken it somewhere in the Mission and decided to share it. I thought “well this is gonna stir some shit” and then posted it on the Broke-Ass Stuart FB page. I had no idea just how much shit it would stir: 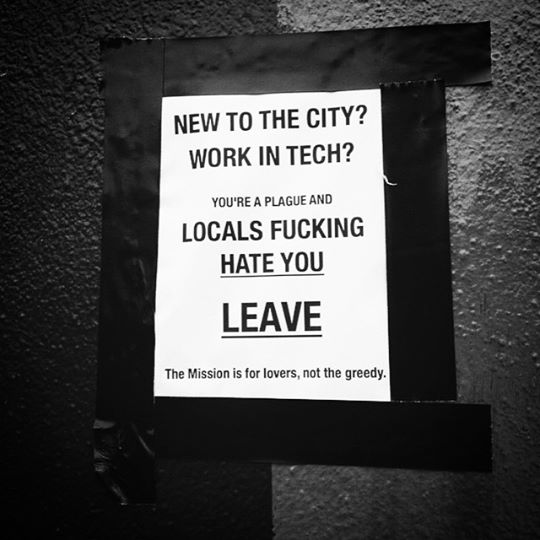 The debate on my FB page totally exploded. At the time I’m writing this, less than 24 hours after I posted it it’s been liked 1.1k times, commented on 270 times and shared 434 times, making it by far the most engaging thing I’ve ever posted on FB. And at the moment the debate rages on.

There has been no shortage of coverage about the way that tech is drastically changing San Francisco, by affecting the housing market and the city’s general culture. Kim-Mai Cutler’s TechCrunch piece did a wonderful job of exploring the myriad things that brought SF to this housing crisis and how it has less to do with tech than we all think. And while I do agree that the culture of the tech community seems to be one that is tone deaf to the roll it has played in San Francisco’s gentrification, the tech workers aren’t necessarily to blame for the city’s change. Yes, they are the ones moving into spaces previously inhabited by lower wage peoples. And yes, the unexamined sense of  entitlement that seems to be part of it is frustrating to say the least (don’t even get me started on dealing with it in a restaurant/bar environment), but still, they aren’t the real bad guys.

The real villains in the San Francisco housing crisis are the real estate developers and realtors who are making obscene amounts of money off people’s sorrow. And of course the politicians who are in their pockets. I’m looking at you Mayor Ed Lee.

Are you a “techie” tired of being maligned for simply moving to a wonderful city for work? I would be too. Here’s what you can do to be one of the good guys, and help unite San Francisco against greed.

Will doing these things “save San Francisco”? No, of course not, but it’s a step in the right direction. We need to bridge this gap between “techies” and “locals” and unite to make San Francisco the inclusive place it should be. There is a war going on and we are all being used to distract each other while a few people at the top get very very rich. Fuck them.

Got other ideas for ways to help? Please include them in the comments.