The New Optimism of Al Gore 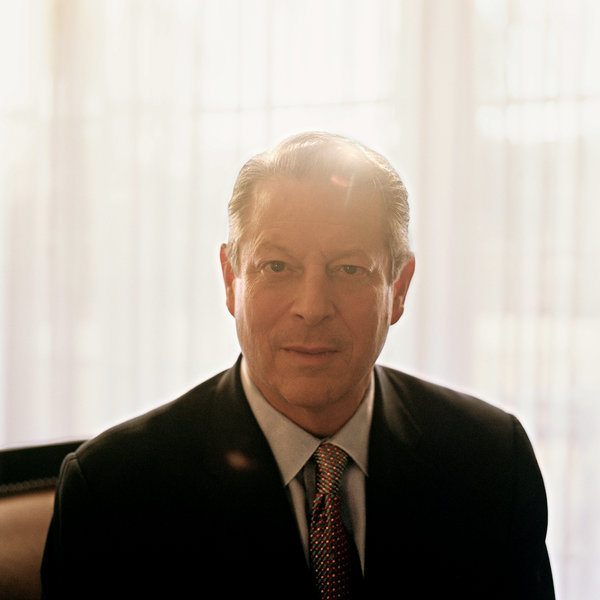 NASHVILLE — Al Gore wants to make a point about cellphones, and he has a helpful set of slides on his laptop. “Do you want to see that?” he asks, and starts to turn the MacBook around.

Mr. Gore knows he is The Guy With the Slides, the man who will talk about the environment until you can no longer remember the color of the sky. He long ago mastered the self-deprecating gestures that let you know that he knows what you are thinking. And then he shows you the slides anyway.

Slides have been very good to the former vice president of the United States, almost president, environmental activist and now successful green investor. His slide show on the threat of climate change, presented in the movie “An Inconvenient Truth,” won an Academy Award. His efforts to spread the word about global warming earned him, along with the United Nations Intergovernmental Panel on Climate Change, a Nobel Peace Prize. His was a dire call to strenuous and difficult action.

Over the last year, however, the prophet of doom has become much more a prophet of possibility — even, perhaps, an optimist. Still an object of derision for the political right, Mr. Gore has seen support for his views rising within the business community: Investment in renewable energy sources like wind and solar is skyrocketing as their costs plummet. He has slides for that, too. Experts predicted in 2000 that wind generated power worldwide would reach 30 gigawatts; by 2010, it was 200 gigawatts, and by last year it reached nearly 370, or more than 12 times higher. Installations of solar power would add one new gigawatt per year by 2010, predictions in 2002 stated. It turned out to be 17 times that by 2010 and 48 times that amount last year.

“I think most people have been surprised, even shocked, by how quickly the cost has come down,” Mr. Gore says in his office in an environmentally friendly building in the prosperous Green Hills neighborhood of Nashville. He sports a style that might be called Southern business casual: a blazer and dress shirt, bluejeans and cowboy boots. At age 66, he is also trimmer than he was during his bearish, bearded period after the 2000 election, thanks in part to a vegan diet he has maintained for two years. In this city? Home of heavenly meat-and-three platters?

He smiles and says proudly, “There are 10 vegan restaurants in Nashville now.”

Over an hour and a half, he delivers an endless stream of facts and trends from around the globe. Every minute in Bangladesh, two more homes get new rooftop solar panels. Dubai’s state utility accepted a bid for a solar power plant with a cost per kilowatt-hour of less than six cents. “Wow,” he says, his eyes wide. “That just set everybody on their ear.”

Such changes, he says, represent a sharp break with the past, not a slow evolution. That is the point of those slides on his laptop. In 1980, one shows, consultants for AT&T projected that 900,000 cellphones might be sold by 2000. In fact, there were 109 million by then. Today there are some seven billion. “So the question is: Why were they not only wrong, but way wrong?” he says. He presses a button, and up pops an old photo of a young Al Gore with a helmet of hair and an early mobile phone roughly the size of one of Michael Jordan’s sneakers.

The same kind of transformation that turned those expensive, clunkers into powerful computers in every pocket is happening now in energy, he says, with new technology leapfrogging old infrastructure. “It’s coming so fast,” he says. “It’s very, very exciting.”

“The only question is how long it takes.”

He is pleased to see the Obama administration becoming more active on climate issues. President Obama’s advocacy of climate change action was overshadowed by the push for health care legislation, a disappointment for Mr. Gore and other environmentalists. “He did not use the bully pulpit in quite the way many of us would have wanted in his first term,” Mr. Gore says. But since Mr. Obama’s re-election, his stronger voice on global warming, tougher carbon emission regulations and major climate agreement with China have the former vice president smiling. “He’s doing a terrific job on it now,” he says.

Mr. Gore is continuing to spread the word. Last month, at the end of an optimistic talk about climate change at the World Economic Forum in Davos, Switzerland, he and the singer Pharrell Williams announced a Live Earth concert to be held on all seven continents on June 18. The concert will include a moment, Mr. Williams told those at the forum, when “we are literally going to have humanity harmonize all at once.”

In the meantime, Mr. Gore will keep his frenetic schedule of training programs around the world. He has met with large groups in Australia, Indonesia, Brazil, India and elsewhere to present local versions of his climate change slide show. Those who attend, in turn, make the presentation to their own countrymen, spreading the word far more broadly than the documentary ever did. “The work of the trainees is not the sort of thing you see on the front page of the newspaper, but they are reaching networks of colleagues and friends in a most powerful way,” said Don Henry, a professor at the Melbourne Sustainable Society Institute and former head of the Australian Conservation Foundation. “Those people are out there changing the world.”

Those presentations are exhaustive — and exhausting, says Orin Kramer, a New York hedge fund manager and friend of Mr. Gore. He attended a training program with some 600 people that was scheduled to run from 8:30 in the morning until 5 p.m. “I assumed there’s going to be a 40-minute warm-up” by Mr. Gore, he says, and then the rest of the day’s activities would be led by assistants.

Instead, “he stands up there in front of this group of people for eight and a half hours and 164 climate slides,” Mr. Kramer says. Many members of the audience were scientists who asked pointed questions, citing specific studies; Mr. Gore answered study with study, point for point. “He knew more about the academic literature than any of the academics in the audience,” Mr. Kramer says. “He basically out-nerded all the other nerds in the room.”

At the same time, Mr. Gore is a less visible leader of the environmental movement in the United States. While he participated in the enormous march before the climate summit in New York City in September, he was not a focus of coverage. But his voice is still being heard, said Reed E. Hundt, a close friend of Mr. Gore who served as chairman of the Federal Communications Commission during the Clinton administration. “Give me the top three global leaders in opinion shaping climate change,” he says. “If you don’t put Gore in that group, I’d be surprised.” But being the lone voice, he adds, means “being a prophet without honor.”

“Nobody wants that job,” Mr. Hundt says. “When you go from being the one guy that says this and that and the other to being the first among equals, to being part of a group of like-minded people, that’s called success.”

Mr. Gore has also become very rich. He co-founded Generation Investment Management, a firm that takes positions in companies that manage themselves along principles of sustainability, including the effects of climate change. He also sits on the board of the venture capital firm Kleiner Perkins Caufield & Byers, which invests heavily in green start-ups. He sold his cable channel, Current TV, to Al Jazeera America in 2013 in a deal that earned him a reported $100 million. (He and his fellow shareholders sued Al Jazeera last year over the deal, alleging fraud and breach of contract.)

His success in the business world has surprised many people, Mr. Kramer says. “I didn’t think of him as a business guy — I’m sure nobody did,” he says, adding that “he is a phenomenally deep student of critical forces that ultimately change society.”

This success has also been the subject of howls from those who find much to dislike about Mr. Gore. His old foes eagerly take aim when his name comes up. Senator James M. Inhofe, Republican of Oklahoma, who has called climate change “the greatest hoax,” now heads the Senate Environment and Public Works Committee. When asked his view of Mr. Gore, he issued a lengthy diatribe against the former vice president’s “alarmism campaign.” Through a spokeswoman, he said in part, “Al Gore’s immense wealth is largely due to his shameless and incessant promotion of the liberal global warming agenda.” He added that the federal climate policies Mr. Gore endorses “would infuse his business ventures with large sums of taxpayer dollars and set him up to become the first climate billionaire.” Mr. Inhofe also referred to a challenge he issued to Mr. Gore in 2007 to reduce the carbon footprint of his Nashville mansion and extensive travel.

When Mr. Gore is asked whether he will respond to Senator Inhofe’s comments, Mr. Gore calls him a “nice man.” As the first words are read to him, he chuckles, but his smile grows tense. As the statement ends, he sighs and says, “Where to start?”

As for the senator’s challenge, Mr. Gore says he does not remember the exchange, but describes the ways he has reduced the environmental impact of his home. He buys electricity from a utility that generates its power from wind and solar sources and has 32 solar panels on his home, as well as insulating windows and LED light bulbs. There are 10 geothermal wells under the driveway. “I do walk the walk, and don’t just talk the talk,” he says.

Is participating in the green economy a conflict of interest? “I think that having a consistent outlook in my advocacy and in the way I invest is a healthy way to live,” he says. Much of what he makes, including all salary from his early stage investing work as a partner at Kleiner Perkins and his Nobel Prize money, goes to his advocacy group, the Climate Reality Project. “I never imagined when I was younger that this would become the principal focus of my life,” he says. “But once you pick up this challenge, you can’t put it down. I can’t. Don’t want to.”

Anthony Leiserowitz, the director of the Yale Project on Climate Change Communication, says Mr. Gore has become a symbol of climate change, which is both good and bad. He energized Democrats on climate issues, but alienated many conservatives, with the eager help of groups like the Heartland Institute and its allies like Mr. Inhofe, who demonize Mr. Gore as part of their campaign to undercut the scientific consensus on the human role in global warming.

“Al Gore cannot ever reinvent himself from the fact that he became one of the country’s most polarizing political leaders,” Dr. Leiserowitz says. “Even as he is trying to explain climate change, he is reminding people, amplifying the conservative response around him.”

Mr. Gore has learned to live with the scorn. “Anyone who carries this banner is going to get shot at,” he says. “And I could say it’s an honor to be the object of such ire from those who are so on the wrong side of history,” he adds, laughing.

“It doesn’t feel like a great honor,” he says. He spreads his arms. “I’m certainly no longer surprised by it.”

Another pause. “Let them have at it.”