A tribute posted in the window of the Haight Ashbury Music Center this week gives a nod to Sam Andrew, the guitarist who helped found the band Big Brother & The Holding Company in 1965.

Andrew died in San Rafael last Thursday at age 73. He had one of the longest continuous tenures in the band, which broke up and re-formed a number of times over the years, reuniting for the last time from 1987 to the present.

Andrew attended USF and pre-dated the Summer of Love in San Francisco; Big Brother got its start at 1090 Page Street, with co-founder Peter Abin.

His death, marked in obituaries from the San Francisco Chronicle to the New York Times, resonated particularly in the Upper Haight (hence the homage at the music center), where Big Brother & The Holding Company became a focal point of the ethos of the Summer of Love. 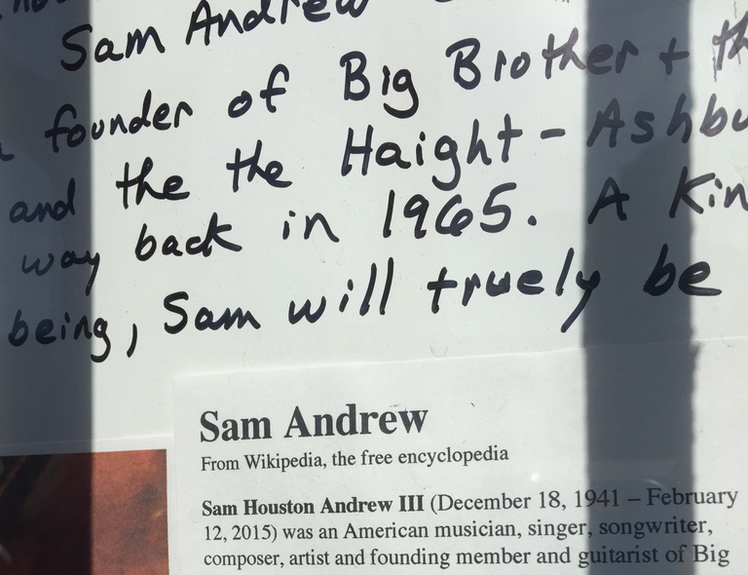 The band not only (and famously) introduced Janis Joplin, it was also an Upper Haight mainstay alongside bands like the Grateful Dead and Jefferson Airplane, all of which gave concerts in the Panhandle Park.

Big Brother became famous for a messy, rough-around-the-edges, bluesy, boozy psych rock sound, and in the transformative years between 1965 and 1968 (when it temporarily disbanded) it became one of the definitive sounds of the era.

Andrew’s other musical outfits included the Kozmic Blues Band (which was actually the outfit Joplin performed with at Woodstock in 1969) and the Sam Andrew Band. If you’re interested in hearing more about Andrew, or how the man who made the most famous LSD in California ended up with an unreleased Big Brother album sitting around in his house, Glide Magazine featured an interview with him back in 2012.