Mr. Natural (his legal name) has been an icon in the Haight for the better part of four decades. The man has seen it all, and then some. Yes, he is the Mr. Natural of R. Crumb’s comics.

Today, he and his longtime friend and business partner, Lynne Vann, run Mr. Natural’s Music School at 1943 Hayes Street. We stopped by the school to talk with Mr. Natural about everything from electronics to activism, and a whole lot in between.
1. What was your background before moving to San Francisco?
“I’m originally from Chicago. I was a child prodigy. I started playing the French horn when I was four years old. When I was 12 or 13 I played for the Chicago Symphony, traveling around a lot and playing under Dr. George Shelty. As a teenager, I ran into Bill Russo and started playing with Stan Kenton. …I was the first person to play Jazz French horn and I learned to amplify it. I also studied electronics in college and got my doctorate in electronics. I’ve been both a scientist and a musician my whole life. I’ve always been both right-brain and left-brain. Generally, there was a battle that went on between jazz and classical musicians …somewhere along the line there I became a closeted composer.
“I also did some television work in Chicago when I was a kid, doing some singing and dancing on Howdy Doody-type shows …I then got into electronics and made a lot of money designing electronics for Sears. I did that for a long time. I moved around from different electronics jobs …the best one was when I worked for Hammond Organ, because I got to bring music and electronics back together. When I moved to San Francisco in ’66, I still bounced around a lot from here to New York, and back to Chicago. I settled here in ’68 and have been here since.”
2. How long have you lived in the Haight? Describe your connection to the counterculture movement in San Francisco.
“I’ve been in The Haight since 1968 and the first place I lived was on Hayes and Clayton. In 1966 I joined an organization called S.I.R. (The Society for Individual Rights). I also joined The Committee for Homosexual Freedom and the Mattachine Society. I also hung out with the San Francisco Atheist Community. I was also a Zen monk at the time, and that’s how I got the reputation for being a spiritual leader. In 1968, I lived through theDemocratic National Convention in Chicago and that’s what caused me to move to San Francisco.
“In 1966, I met Janis Joplin and we became good friends and she was the one who named me Mr. Natural. She had started hanging out with Big Brother & the Holding Company and they had written a song called Mr. Natural. On my birthday, June 10th, 1966, they played together for the first time and she played that song for me. The rest of what happened with her is history.
“Besides being in other groups, I also started some myself. I started the Gay Liberation Front in San Francisco. I was chairman of that organization for about four years. In 1968, there was a psychiatric convention here and we organized a protest. We got organized with N.O.W. and the Black Panthers … we also got theDaughters of Bilitis on board and protested the psychiatric treatment of homosexuals and women. It was common back then if Mayor Alioto didn’t like you, you’d be 5150’d and wind up in a psych ward and your civil rights would be gone. You were basically a political prisoner. We got them to change their bylaws to recognize that homosexuality was not a disease, but an alternative lifestyle.
“I also created the San Francisco Free Theatre with Bill Russo. I helped get him declared San Francisco composer for one year … he created a ballet called “Three Pieces for Blues Band and Orchestra” and it was performed by the San Francisco Ballet. Bill Russo was also the composer for the San Francisco Free Theatre. That went on from 1968 to 1976. Additionally, I made the first rent strike in San Francisco, by stopping paying rent in 1970, and I fought the case until 1975. I won the case, and it became legal precedent. It became a law called the Writ of Habitability. The case was called Green vs. Davis Realty.” 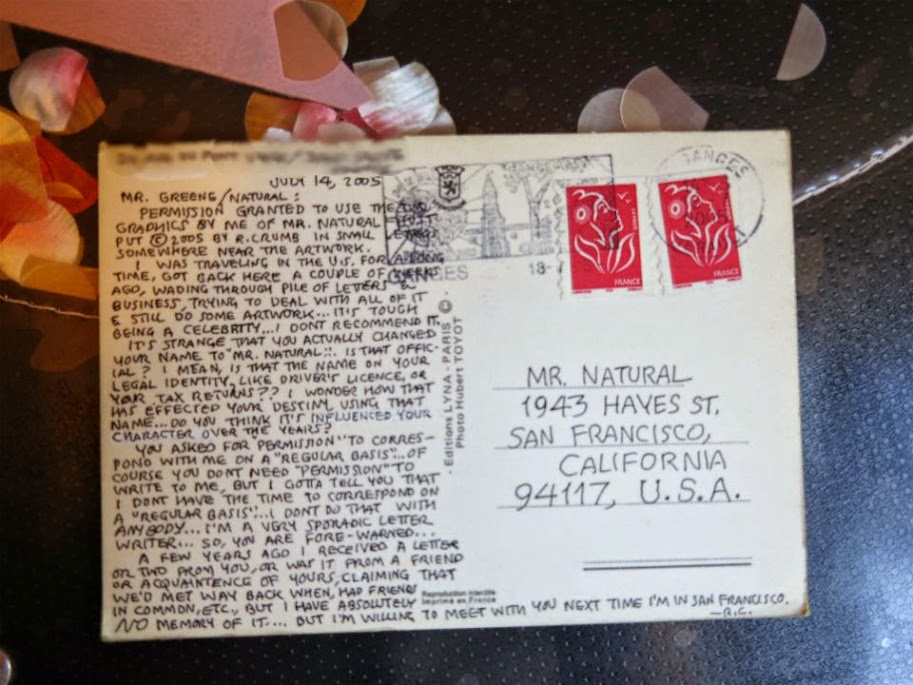 3. What is your relationship to the R. Crumb comic?
“In 1973, I had my name legally changed to Mr. Natural. In 1967, R. Crumb was back East and heard the name Mr. Natural on the radio and thought it would be a good name for a cartoon character. He developed the cartoon and moved here in 1968, where he helped organize the underground comics movement. He was involved with a publisher called Rip Off Press, and I was working at a newspaper called The Good Times Newspaper. I was a “stat man”, and I did a process by which we fixed flaws in photo negatives. Rip Off Press would bring their material to us to help with their artwork.
“I was working on some of Crumb’s artwork and came across a character called Mr. Natural. I later met with Robert and he was surprised to meet the real life Mr. Natural. At the time, the character was skinny and I was a bit fat, but over time, he made revisions until the character looked more like me. He even put glasses on him! If you look at earlier versions and later versions, you can see the difference. Over time, more and more people would come by looking for Mr. Natural and they still do that to this day.”
4. Why did you start your music school?
“In 1984 we started Mr. Natural’s Electric Classroom. We were teaching artists how to use computers to create art and music. At the time, no one considered anything coming out of a computer ‘real music’. We started down the block at 1911 Hayes Street. We had all the early home models of the computers, such as Ataris, Commodores, Radio Shacks, Amigas, and the first Apples. We actually still have them down in the basement. We also taught a lot of electronics classes back then. We were teaching a lot of classes to women, predominantly. A lot of people didn’t want to learn music on the computer, and I got snowed under by people asking me to fix their electronics. I decided to thin the herd.
“That’s when I decided it would be music and only music. That’s when I started teaching music the traditional way, and using computers as an auxiliary. So all through the 90s, I was teaching electronics and music privately. In 1999 I had a bit of a nervous breakdown and decided to just teach music. We opened up the music school in this location on January 1st, 2000 and we’ve been doing it ever since.
“All my life I’ve been developing a new way of looking at music theory. Everyone uses the ABC system, which has been around for a thousand years. A lot of people can’t learn music by the ABC system … they play by ear. Music in America is taught as a vocation, but it’s really an art form. I needed to figure out a way to teach myself how to compose … so we created a system based on intervals.
“We use a device called the Intervalometer. It was first developed for the piano, but now we can use it for any instrument. I’ve also created fingering charts for any other instrument that uses the Intervalometer. It became my goal to learn every musical instrument on earth. So far, I’ve learned 54, so I know it works. We opened the music school to experiment with this method. We found that this method allows people to learn things very quickly that would otherwise take years. The secret is to tame the right brain. Music is often taught mechanically and we wanted to put the art back in it.”
5. Do you think the Haight has lost its soul?
“Yes and no. A lot of it has been lost, but some of it is still here. You just have to dig under the right rocks, and then pops out a hipposaurus. It’s like you’re out hunting for monsters.
“The problem is that people come to Haight Ashbury with their own ideas of what it means to be a ‘hippie,’ mostly based on what’s been advertised, and this mindset has diluted what was really going on back then.”
Mr. Natural’s Music School is located at 1943 Hayes. If you’d like to schedule a music lesson with Mr. Natural, you can call at (415) 688-0933, or visit the website.