Florida Finds Itself in the Eye of the Storm on Climate Change – NYTimes.com
http://mobile.nytimes.com/2014/05/08/us/florida-finds-itself-in-the-eye-of-the-storm-on-climate-change.html?referrer= 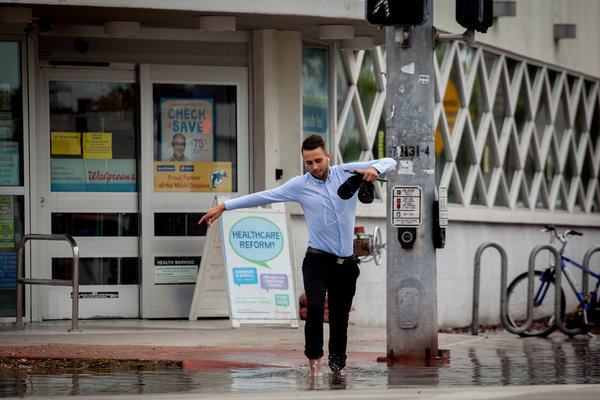 MIAMI BEACH — The sunny-day flooding was happening again. During high tide one recent afternoon, Eliseo Toussaint looked out the window of his Alton Road laundromat and watched bottle-green saltwater seep from the gutters, fill the street and block the entrance to his front door.

“This never used to happen,” Mr. Toussaint said. “I’ve owned this place eight years, and now it’s all the time.”

Down the block at an electronics store it is even worse. Jankel Aleman, a salesman, keeps plastic bags and rubber bands handy to wrap around his feet when he trudges from his car to the store through ever-rising waters.

A new scientific report on global warming released this week, the National Climate Assessment, named Miami as one of the cities most vulnerable to severe damage as a result of rising sea levels. Alton Road, a commercial thoroughfare in the heart of stylish South Beach, is getting early ripples of sea level rise caused by global warming — even as Florida’s politicians, including two possible contenders for the presidency in 2016, are starkly at odds over what to do about it and whether the problem is even real.