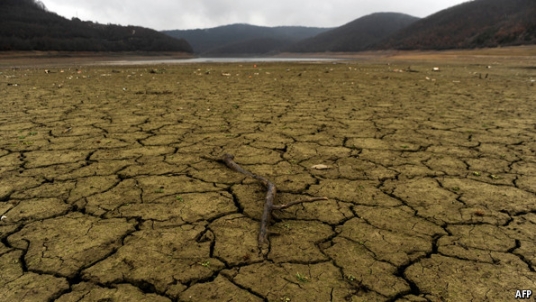 “THE four horsemen of the apocalypse”: that was the disparaging appraisal by Richard Tol of the University of Sussex of a report published in Yokohama on March 31st by the Intergovernmental Panel on Climate Change (IPCC), a group of scientists (including Dr Tol) who provide governments round the world with mainstream scientific guidance on the climate. Every six or so years, the IPCC produces a monster three-part encyclopedia; the first instalment of its most recent assessment came out last September and argued that climate change was speeding up, even if global surface temperatures were flat. The new tranche looks at the even more pertinent matter of how the climate is affecting the Earth’s ecosystems, the economy and peoples’ livelihoods.

Profoundly, is the headline answer, even though temperatures have warmed by only 0.8°C since 1800. They are likely to warm by at least twice that amount (and probably much more) by 2100. The report—the first since the collapse in 2009 of attempts to draw up a global treaty to reduce greenhouse-gas emissions—argues that climate change is having an impact in every ecosystem, from equator to pole and from ocean to mountain. It says that while there are a few benefits to a warmer climate, the overwhelming effects are negative and will get worse. It talks of “extreme weather events leading to breakdown of…critical services such as electricity, water supply and health and emergency services”; about a “risk of severe ill-health and disrupted livelihoods for large urban populations due to inland flooding”; and sounds the alarm about “the breakdown of food systems, linked to warming”.

Behind such headline scares, though, lies a subtler story, in which the effects of global warming vary a lot, in which climate change is one risk among many, and in which the damage—and the possibility of reducing it—depends as much on the other factors, such as health systems or rural development, as it does on global warming itself.

Compared with previous IPCC reports—the last was in 2007—the new one is confident about its assessment of damages, and more willing to attribute the harm to human influence on the climate. Take the rise in sea levels, which (pushed up by thermal expansion) has been increasing more in the 14 years of this century than it did from 1971 to 2000. The report reckons that, at current rates, average sea levels could rise by another half a metre or more by the end of the century, if greenhouse gases are not significantly curtailed. That is nothing but bad news for the people living in cities vulnerable to flooding from the sea: they now number 271m, and may increase to 345m by 2050, says the IPCC (some estimates put the figures higher). Nor are there any benefits from ocean acidification (caused by the absorption of carbon dioxide in seawater) which the report calls “a fundamental challenge to marine organisms and ecosystems”.

Equally stressed are terrestrial ecosystems facing sudden and irreversible change: climate “tipping points”. In the Arctic, for example, which is warming faster than any other large environment on earth, new shrubs and plants are invading formerly inhospitable areas. The vast boreal forests or Siberia and Canada are dying back faster than was expected in 2007, and may be more sensitive to warming than was then thought.

On the other hand, there are substantial areas where the influence of the climate is modest compared with other factors. Health is one. Pollution from factories adds to global warming and causes health problems directly: a new report by the World Health Organisation linked around 7m deaths to air pollution. In a warmer world, some diseases, such as malaria, will spread their range. Heat-related deaths will rise but cold-related ones will fall. In parts of the world where there are more cold-related than heat-related deaths, such as northern Europe, warmer temperatures could actually reduce the number of early deaths. By and large, the report says, the negative impacts will outweigh the positive ones but, for good or ill, the climate is not the dominant influence on mortality and morbidity. Public health and nutrition matter more.

Something similar is true for civil conflicts. Poverty and economic shocks help cause conflicts and are themselves influenced by climate change. Global warming can bring about changes in land use, reduce water supplies, and push up food prices, all of which contribute to riots (arguably, all this happened in Darfur). But it is hard to show that climate change has had a direct impact on levels or patterns of violence. If anything, it is the other way around: conflict reduces peoples’ ability to cope with climate change by, for example, laying mines in farmland. Surprisingly, global warming does not seem to be the culprit in most extinctions, either. With the exception of some frog species in Central America, no recent extinctions have been attributed to climate change.

So climate change has been powerful (in the oceans) and secondary (in health). But there is a third category: areas where the climate has had a large distributional effect, which may be good or bad, but usually appears to be negative. Fish are the most mobile of creatures and as the seas warm, marine animals and plants follow the cooler waters, migrating from the tropics to temperate latitudes. Benthic (bottom-feeding) algae are moving polewards at a rate of 10km per decade; phytoplankton are moving at over 400km a decade. The result, says the report, is that by 2055, fish yields in temperate latitudes could be 30%-70% higher than they were in 2005 (assuming there are any fish left by then) whereas the tropical fish yield will fall 40-60%. A similar distributional change, the scientists argue, is affecting the hydrological cycle: the rate at which groundwater is recharged is likely to increase in temperate climes and fall in tropical ones, leading to further drying of the soil in the dry tropics.

The most important distributional change, the IPCC reckons, concerns food, especially cereal crops. A warmer climate, in principle, should lengthen the growing season, since it becomes warm enough to plant seeds earlier. More carbon in the atmosphere should increase the rate of photosynthesis. Both these influences should mean that some plants will do better in a world with higher temperatures and more carbon dioxide. The previous IPCC assessment thought the world’s main cereals—wheat, rice, maize and soya—would see improved yields in temperate climates, offsetting yield declines elsewhere. Some climate sceptics have used this to argue that, at least until the middle of the century, a modest amount of global warming might be good for the world.

The new report pours cold water on that. It confirms that tropical cereals suffer declining yields when temperatures rise 2°C but finds that the benefits to temperate-climate crops are smaller than was thought. Rainfed or water-stressed crops, which were once thought to respond well to higher levels of carbon dioxide, now seem not to. Plants—especially maize—may like a long growing season but they hate temperature spikes more: even one day above 30°C may be enough to damage them. And it turns out that rates of photosynthesis in maize, sorghum and sugarcane are not responsive to changes in concentrations of CO2, so the effect of more carbon on temperate crops is patchy. Whether more heat and carbon produce yield increases seems to depend mostly on local conditions.

Meanwhile, the impact of other negative influences is more important than was thought. Weeds seem to benefit more than cereals at temperate latitudes, so they provide more competition to food crops for water, sunlight and nutrients. Greater concentrations of ozone are more damaging than was thought: the new report reckons high ozone levels cause an 8-15% reduction in yields compared with normal crops. Perhaps most important, higher CO2 concentrations reduces the quality of cereals, that is, their protein and starch content, taste and mineral components (and hence nutritional value). This is particularly significant for forage crops: with poorer quality grains, animals are smaller and less healthy. Cattle are suffering anyway because they are being bred for meat yield alone, which, in practice, has made them more heat-sensitive: a double burden.

At the moment, the report concludes, wheat yields are being pushed down by 2% a decade compared with what would have happened without climate change; maize is down 1% a decade; rice and soyabeans are unaffected. Over time, though, this could worsen. If you look at studies of likely cereal yield in the next decade, roughly half of them forecast an increase and half a decline. But for the 2030s, twice as many studies are forecasting a fall as a rise.

So how much might all these influences affect the world economy? The IPCC’s surprising answer to that is: hardly at all. A 2°C rise in temperature, it says, could result in worldwide economic losses of only 0.2% to 2% of GDP a year. The trouble is, as the IPCC also says, this figure is misleading. GDP is a bad measure of climate impacts and the economic models used are hopeless (“completely made up”, said one recent critic). GDP does not account for catastrophic losses, which may be the most important kind. As an income measure, it gives less weight to the poor—but the poor are more vulnerable to climate change than the rich. That is true both between countries (Bangladesh is more vulnerable to floods than the Netherlands) and within them (richer Bangladeshis live in safer areas). The models do not take account of things like “tipping points”; do not care if carbon concentrations go sky-high and assume that if an economy were ravaged by drought or floods, it would suddenly have lots of “spare capacity” that could be redeployed.

But in some ways, the IPCC’s new assessment also explains why all this does not really matter. Models are useful for calculating costs and benefits: you invest this much in new capacity and earn that much as a result. But, as the report implies, climate change is not a problem just because its costs outweigh its benefits. Rather, it matters because it increases risk, causes unpredictable interactions between climate and social or factors and because it manifests itself as extreme events (floods, heat waves) which inflict huge damage in a flash. Previous IPCC reports are looked at particular parts of this picture. The new assessment for the first time looks at climate change not just as a problem in its own right but as something that is merely part of an even bigger context.