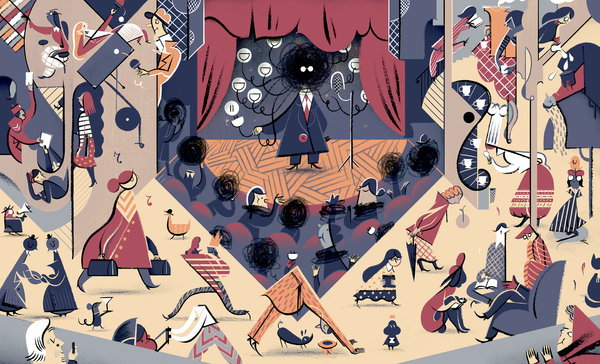 The Collection: A Fashion App for the iPad

A one-stop destination for Times fashion coverage and the latest from the runways.

Follow@NYTfashion for fashion, beauty and lifestyle news and headlines.

As Soren Gordhamer patiently quieted a packed Wisdom 2.0 event in San Francisco in September for a guided meditation, a few in the communal meeting space known as the Hub couldn’t resist thumbing another message or two before pocketing their sacred devices. A willowy young brunette in a black T-shirt shot video of the crowd with her iPad from her front-row seat. Even after Mr. Gordhamer, who is tall with a sculptural face and Errol Flynn hair, urged the group to “come into presence,” his voice rising in emphasis, someone’s phone was buzzing like a dragonfly.

Mr. Gordhamer started Wisdom 2.0 in 2009 to examine how we can live with technology without it swallowing us whole. The wait lists for his panel talks and conferences now run into the hundreds.

The “Disconnect to Connect” meet-up was typical. The audience was mostly young, mostly from the Silicon Valley tech scene and entirely fed up with taking orders from Siri. “There was a time when phones didn’t tell you to do everything,” said Mr. Gordhamer, 45, as the conversation got rolling. “What’s work, what’s not work, it’s all become blurred.”

And yet, the problem may offer a solution. Loïc Le Meur, a French blogger and entrepreneur and the evening’s guest speaker, recommended a meditation app called Get Some Headspace. The program bills itself as the world’s first gym membership for the mind. “It’s a way to have a meditation practice without feeling weird about it,” said Mr. Le Meur. He was wearing Google Glass with only a hint of irony. “You don’t have to sit in a lotus position. You just press ‘play’ and chill out.”

Earlier that morning at Google headquarters in Mountain View, Calif., Chade-Meng Tan, a veteran engineer, was laughing about the demand for an in-house course he created called “Search Inside Yourself.” The seven-week class teaches mindfulness, a loose term that covers an array of attention-training practices. It may mean spending 10 minutes with eyes closed on a gold-threaded pillow every morning or truly listening to your mother-in-law for once. Google naturally sees it as another utility widget for staying ahead. “Whenever we put the class online, it sells out in 30 seconds,” Mr. Tan said.

This is not just a geek thing. Everywhere lately, the here and now is the place to be. George Stephanopoulos, 50 Cent and Lena Dunham have all been talking up their meditation regimens. “I come from a long line of neurotic Jewish women who need it more than anyone,” Ms. Dunham, who’s been meditating since she was 9, told a capacity crowd last month at the David Lynch Foundation for Conscious Based Education and World Peace in New York. Then there was the tweet last April from @rupertmurdoch, who announced: “Trying to learn transcendental meditation. Everyone recommends, not that easy to get started, but said to improve everything!”

The Marine Corps is testing Mind Fitness Training to help soldiers relax and boost “emotional intelligence,” the buzzwords of the hour. Nike, General Mills, Target and Aetna encourage employees to sit and do nothing, and with classes that show them how. As the high priestess of the fully aware, Arianna Huffington this year started a mindfulness conference, a page dedicated to the subject on The Huffington Post and a “GPS for the Soul” phone application with a built-in heart sensor to alert you when you’re calm or stressed.

The hunger to get centered is especially fervent in the cradle of the digital revolution. The Facebook co-founder Dustin Moskovitz told Wisdom 2.0 audiences about modeling his current software start-up, Asana, after lessons learned in his yoga practice. At the same summit, eBay’s founder and chairman, Pierre Omidyar, shared the stage with Thupten Jinpa, the Dalai Lama’s English interpreter, and pegged the auction site’s success on human goodness and trusting in complete strangers. At another, Padmasree Warrior, the chief technology and strategy officer at Cisco, detailed analog weekends devoted to family, painting, photography and haiku.

Thich Nhat Hanh, the Vietnamese Buddhist leader who introduced mindfulness to Westerners (Google got first dibs on him as a guest speaker), once said, “The most precious gift we can offer anyone is our attention.” Yet for the majority of sentient beings today, simply getting through an episode of “The Big Bang Theory” without tending multiple screens is a quasi-mystical triumph. Naturally, the architects of our electronic age approach the situation as if it were an engineering problem.