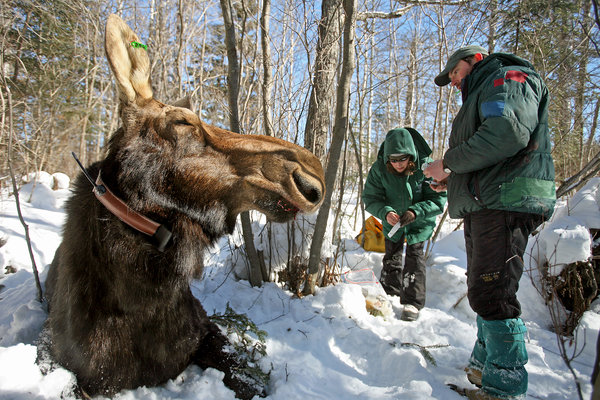 CHOTEAU, Mont. — Across North America — in places as far-flung as Montana and British Columbia, New Hampshire and Minnesota — moose populations are in steep decline. And no one is sure why.

Twenty years ago, Minnesota had two geographically separate moose populations. One of them has virtually disappeared since the 1990s, declining to fewer than 100 from 4,000.

The other population, in northeastern Minnesota, is dropping 25 percent a year and is now fewer than 3,000, down from 8,000. (The moose mortality rate used to be 8 percent to 12 percent a year.) As a result, wildlife officials have suspended all moose hunting.

“Something’s changed,” said Nicholas DeCesare, a biologist with the Montana Department of Fish, Wildlife and Parks who is counting moose in this part of the state — one of numerous efforts across the continent to measure and explain the decline. “There’s fewer moose out there, and hunters are working harder to find them.”

What exactly has changed remains a mystery. Several factors are clearly at work. But a common thread in most hypotheses is climate change.

Winters have grown substantially shorter across much of the moose’s range. In New Hampshire, a longer fall with less snow has greatly increased the number of winter ticks, a devastating parasite. “You can get 100,000 ticks on a moose,” said Kristine Rines, a biologist with the state’s Fish and Game Department.

In Minnesota, the leading culprits are brain worms and liver flukes. Both spend part of their life cycles in snails, which thrive in moist environments.

Another theory is heat stress. Moose are made for cold weather, and when the temperature rises above 23 degrees Fahrenheit in winter, as has happened more often in recent years, they expend extra energy to stay cool. That can lead to exhaustion and death.

In the Cariboo Mountains of British Columbia, a recent study pinned the decline of moose on the widespread killing of forest by an epidemic of pine bark beetles, which seem to thrive in warmer weather. The loss of trees left the moose exposed to human and animal predators.

In Smithers, British Columbia, in April, a moose — starving and severely infested with ticks — wandered into the flower section of a Safeway market. It was euthanized.

Unregulated hunting may also play a role in moose mortality. So may wolves in Minnesota and the West.

Scientists and officials say other factors could still emerge. Because most moose die in the fall, the next few months may provide insight.

“It’s complicated because there’s so many pieces of this puzzle that could be impacted by climate change,” said Erika Butler, until recently the wildlife veterinarian at the Minnesota Department of Natural Resources.

The stakes go beyond the moose themselves. The animals are ecosystem engineers; when they browse shrubs, for example, they create habitat for some nesting birds.

And moose contribute to the economy. In New Hampshire, for instance, moose-watching tourism is a $115-million-a-year business, according to Ms. Rines. Hunting permits also generate revenue.

Moose deaths are hard to study, scientists say. The moose is a member of the deer family, but unlike deer it is a solitary animal that does not run in herds, so it can be hard to track. Moreover, moose have such high levels of body fat that they decompose rapidly; after 24 hours, a necropsy has little value.

In January, Minnesota started an unusual $1.2 million study using advanced monitoring technology to find moose as soon as they die. Live animals are captured and fitted with collars that give their location every 15 minutes, and they are given feed containing a tiny transmitter that remains in the body and monitors heart rate and temperature. Then the moose are released back into the wild.

“If the heart stops beating, it sends a text message to our phone that says, ‘I’m dead at x and y coordinates,’ ” said Dr. Butler, who leads the study. The messages are monitored around the clock; when a moose dies, a team on call rushes to the scene by car or helicopter.

The winter tick problem in New Hampshire is particularly vexing. The animals lose so much blood they can become anemic. Worse, the ticks drive the moose crazy; they constantly scratch, tearing off large patches of hair.

Some moose lose so much hair they look pale, even spectral; some people call them “ghost moose.” When it rains in the spring, the moose, deprived of their warm coats, then become hypothermic.

Winter ticks hatch in the fall and begin to climb aboard their host. They are dormant until January or February, when they start to feed, molt into adults and then drop off.

Moose spend a lot of time feeding in lakes, but wading in water doesn’t drown the ticks, which form an air bubble that allows them to survive immersion in water.

New Hampshire’s winter tick problem is a relatively recent phenomenon. But then, so are moose. The animals were hunted out of existence during Colonial times; they returned to the state only in the 1970s.

While deer have evolved to an ecological balance with ticks, moose have not.

Deer are grooming animals, so they are able to keep tick numbers fairly low. By contrast, said Ms. Rines, the biologist, “moose didn’t evolve with ticks, and they don’t groom them off.” That has led to swarms of ticks.

The solution to the tick problem might be, paradoxically, more moose hunting. “It’s up to the public,” she said. “We could kill more if we want healthy moose.”