There’s a New Definition of ‘Normal’ for Weather – The New York Times
https://www.nytimes.com/interactive/2021/05/12/climate/climate-change-weather-noaa.html?action=click&module=Top%20Stories&pgtype=Homepage

The United States is getting redder.

No, not that kind of red. (We’ll leave that to the political pundits.) We’re talking about the thermometer kind.

The National Oceanic and Atmospheric Administration last week issued its latest “climate normals”: baseline data of temperature, rain, snow and other weather variables collected over three decades at thousands of locations across the country.

Updated every 10 years, the normals are used by TV meteorologists when they tell you that today’s blisteringly high temperature was 10 degrees above normal for that location and date, for instance, or that a single heavy downpour brought more rain than is typical for an entire month.

The normals — which are available on annual, seasonal, monthly, daily and even hourly timescales — are invaluable to farmers, energy companies and other businesses, water managers, transportation schedulers and any one who plans their activities in coming weeks or months based on what is likely, weather-wise. They come in handy, too, if you want to know how to pack for Oshkosh, say, in October, or if you’re past the last frost date and wondering if it’s safe to put out some tomato seedlings.

“What we’re trying to do with climate normals is put today’s weather in the proper context,” said Michael Palecki, who manages the project at NOAA’s National Centers for Environmental Information.

Because the normals have been produced since 1930, they also say a lot about the weather over a much longer term. That is, they show how the climate has changed in the United States, as it has across the world, as a result of emissions of heat-trapping gases over more than a century.

“We’re really seeing the fingerprints of climate change in the new normals,” Dr. Palecki said. “We’re not trying to hide that.”

Not that they could. The maps showing the new temperature normals every 10 years, compared with the 20th century average, get increasingly redder.

“There’s a huge difference in temperature over time, as we go from cooler climates in the early part of the 20th century to ubiquitously warmer climates,” he said.

The change is especially drastic between the new normals and the previous ones, from 2010. “Almost every place in the U.S. has warmed,” Dr. Palecki said.

The temperature results are in keeping with what we’ve long known: that the world has warmed by more than 1 degree Celsius (about 1.8 degrees Fahrenheit) since 1900, and that the pace of warming has accelerated in recent decades.

As for precipitation changes, the maps reveal America’s split personality — some regions, notably the Southwest, are becoming increasingly drier, while the Central and Eastern parts of the country are getting wetter. 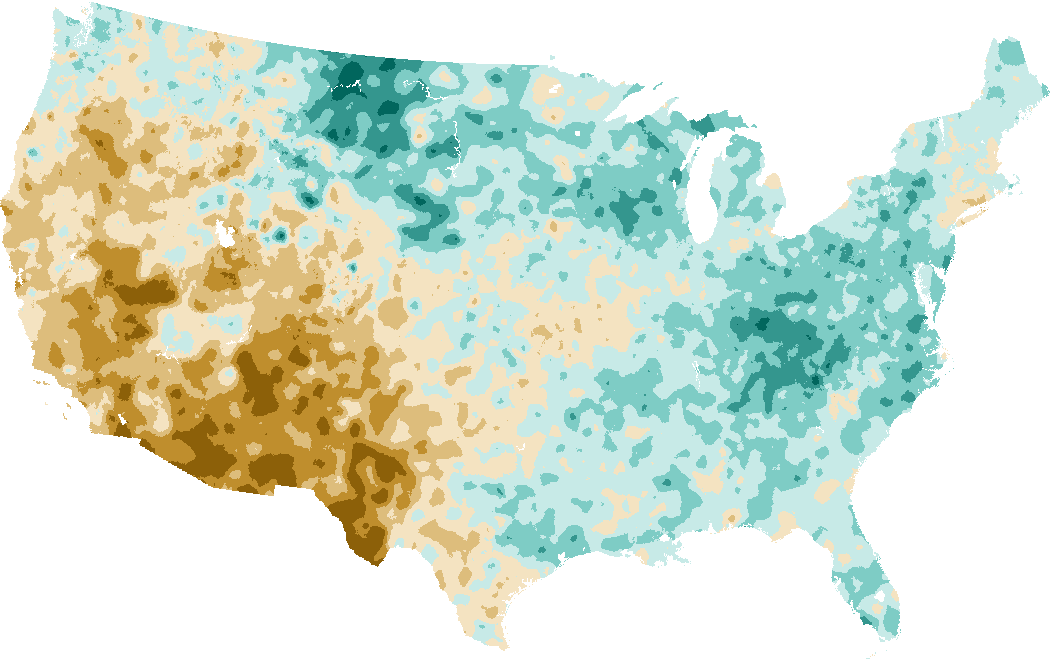 The precipitation results also track the understanding that warming increases evaporation, and warmer air holds more moisture, so generally precipitation is expected to increase as the world gets warmer. Heavy downpours have increased in the United States in recent decades, and the trend is expected to continue.

But climate change can also cause shifts in circulation in the atmosphere and oceans, which can in turn affect regional precipitation patterns. So as the maps show, precipitation changes over the decades are less uniform across the United States.

The normals use data gathered from about 15,000 weather stations around the country. About 900 of them, mostly at airports, are fully automated, providing measurements of temperature, precipitation, wind speed and other variables around the clock.

But more than 8,000 stations are operated by volunteer weather geeks, part of one of the largest — and, dating back to 1890, one of the oldest — citizen-science projects anywhere.

The normals are computed using 30 years of data and the newest ones include data from 1991 to 2020. But they are not simple averages. NOAA experts account for changes in monitoring instruments and other conditions that could create inconsistencies or gaps.

Thirty years is just one possible time period for computing normals, said Imke Durre, a product section chief for the National Centers for Environmental Information. It was requested in 1930 by the World Meteorological Organization, of which the United States is a member.

While 30-year normals are still useful, Dr. Durre said, there is now a need for ones that don’t go back as far for their averages.

“In a time of changing climate, many industries have found they have a use for shorter-period normals,” she said, ”thinking that this may describe the current state of the climate more accurately, especially when it used to forecast conditions in the near future.”

In response, Dr. Durre said, NOAA is now offering 15-year normals as well, using data from 2006 to 2020. Like all the other statistics, they are publicly available.