Opinion | The Economy Does Much Better Under Democrats. Why? – The New York Times
https://www.nytimes.com/2021/02/02/opinion/sunday/democrats-economy.html?action=click&module=Opinion&pgtype=Homepage

G.D.P., jobs and other indicators have all risen more slowly under Republicans for nearly the past century. 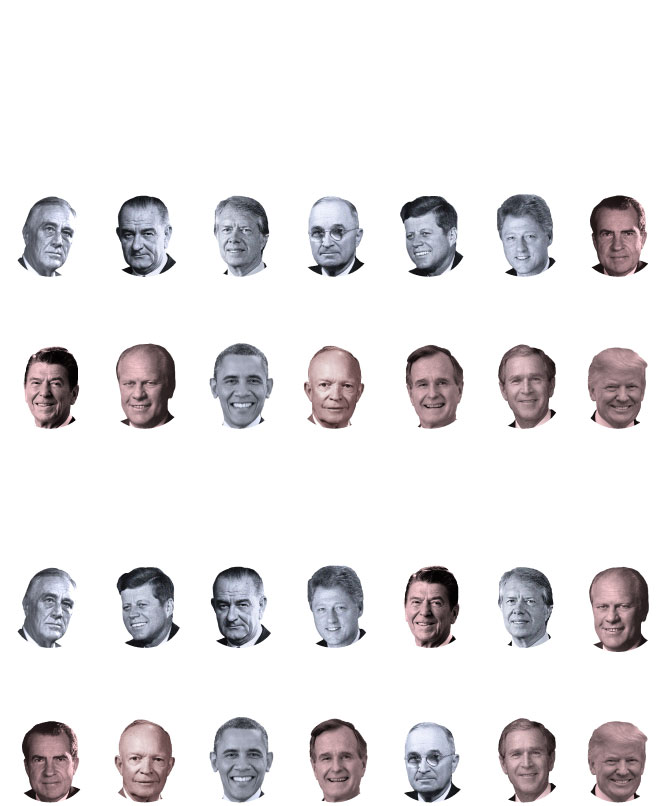 from highest to lowest

A president has only limited control over the economy. And yet there has been a stark pattern in the United States for nearly a century. The economy has grown significantly faster under Democratic presidents than Republican ones.

It’s true about almost any major indicator: gross domestic product, employment, incomes, productivity, even stock prices. It’s true if you examine only the precise period when a president is in office, or instead assume that a president’s policies affect the economy only after a lag and don’t start his economic clock until months after he takes office. The gap “holds almost regardless of how you define success,” two economics professors at Princeton, Alan Blinder and Mark Watson, write. They describe it as “startlingly large.”

Start of the term

Since 1933, the economy has grown at an annual average rate of 4.6 percent under Democratic presidents and 2.4 percent under Republicans, according to a Times analysis. In more concrete terms: The average income of Americans would be more than double its current level if the economy had somehow grown at the Democratic rate for all of the past nine decades. If anything, that period (which is based on data availability) is too kind to Republicans, because it excludes the portion of the Great Depression that happened on Herbert Hoover’s watch.

Start of the term

The big question, of course, is why. And there are not easy answers.

I have shown the data to multiple economists in recent weeks, and most say they are not sure how to explain it, at least not fully. “We don’t quite get why it’s the case,” Katherine Eriksson, a professor at the University of California, Davis, who specializes in economic history, told me. Marianne Wanamaker, an economist at the University of Tennessee, described the pattern to the graduate students in a class she teaches and asked for their thoughts. “They were sort of stumped,” she said.

Debatable: The sharpest arguments on the most pressing issues of the week.

Part of the answer surely involves coincidence. Some presidents, like Barack Obama and George W. Bush, take office when the economy is in a downturn, while others, like Harry Truman and Donald Trump, inherit a boom. Some, like Lyndon Johnson and Ronald Reagan, preside over military buildups; others, like Dwight Eisenhower and Bill Clinton, drawdowns. More broadly, the economy’s performance stems from millions of decisions made every day by businesses and consumers, many of which have little relation to government policy.

Still, the pattern is so strong and long-lasting that coincidence alone is unlikely to be the only explanation. Statistical noise, as Mr. Blinder and Mr. Watson wrote in their paper exploring the pattern, does not seem to be the answer.

What, then, are the most plausible theories?

First, it’s worth rejecting a few unlikely possibilities. Congressional control is not the answer. The pattern holds regardless of which party is running Congress. Deficit spending also doesn’t explain the gap: It is not the case that Democrats juice the economy by spending money and then leave Republicans to clean up the mess. Over the last four decades, in fact, Republican presidents have run up larger deficits than Democrats.

That leaves one broad possibility with a good amount of supporting evidence: Democrats have been more willing to heed economic and historical lessons about what policies actually strengthen the economy, while Republicans have often clung to theories that they want to believe — like the supposedly magical power of tax cuts and deregulation. Democrats, in short, have been more pragmatic.

When Franklin D. Roosevelt first ran for president, in 1932, he did not have a fully coherent economic plan. He sometimes argued that reducing the deficit was the key to ending the Depression. Above all, though, he called for “bold, persistent experimentation.” As he explained: “Take a method and try it: If it fails, admit it frankly and try another. But above all, try something.”

Over time, he and his advisers came to champion the ideas of John Maynard Keynes. In an economic downturn, when companies and households are caught in a vicious cycle of spending reductions, the government needs to step in. The Keynesian approach has shaped Democratic economic policy ever since.

It has made Democratic presidents much more aggressive in responding to crises than Republicans. Not only was Hoover passive in the face of the Depression, but the first George Bush was slow to fight the 1990-91 recession, and the second George Bush was slow to begin fighting the 2007-9 financial crisis. Mr. Obama and now President Biden, when faced with an economic crisis, have been much bolder.

Michael Strain, an economist at the American Enterprise Institute, a conservative think tank, told me that he believed the overall partisan pattern was mostly coincidence. But, he said, “It is certainly a defensible posture that in periods of economic distress Democrats are more concerned about jobs than Republicans.”

The past year has offered another case study. Mr. Trump repeatedly downplayed the coronavirus pandemic, and the country suffered. The economy would have experienced a downturn no matter who was president, but his scattered response aggravated the pandemic and the recession. In some other countries, life is much closer to normal. In the United States, Mr. Trump became the first president since Hoover to preside over a decline in employment.

The pragmatism gap isn’t only about recessions, either. Democrats have also been more aggressive about making job-creating investments — in medical research and clean energy, for example — that the private sector does not make when left to its own devices. Occasionally, a Democratic president has even been willing to go against type in order to encourage growth. Mr. Clinton, persuaded that deficit reduction could bring down interest rates and accelerate growth, scrapped some early spending plans and raised taxes. Interest rates fell, and the economy boomed.

Some past Republican presidents took a similarly pragmatic approach. Despite being conservative, both Eisenhower and Nixon were nonetheless comfortable using government to help the economy when needed. The elder George Bush signed a tax increase that contributed to the deficit reduction that, in turn, fueled the 1990s boom.

For the most part, however, Republican economic policy since 1980 has revolved around a single policy: large tax cuts, tilted heavily toward the affluent. There are situations in which tax cuts can lift economic growth, but they typically involve countries with very high tax rates. The United States has had fairly low tax rates for decades.

The evidence now overwhelmingly suggests that recent tax cuts have had only a modest effect on the economy. G.D.P. grew at virtually the same rate after the 2017 Trump tax cut as before it. If anything, the Clinton tax increase of 1993 has a better claim on starting a boom than any tax cut since.

One possibility is that the two parties are both responding to the interest groups that support and finance them, suggested Ms. Wanamaker, who worked in the White House Council of Economic Advisers during the Trump administration. But the Democratic-leaning groups (like labor unions and civil-rights organizations) may favor policies that lift broad-based economic growth, while Republican-leaning groups (like the wealthy) favor policies that mostly shift income toward themselves.

These explanations are almost certainly not complete. Much of the partisan gap remains mysterious. At the end of their academic paper on it, Mr. Blinder, a former Federal Reserve vice chairman and Clinton administration official, and Mr. Watson encourage other economists to study the issue.

But if the causes are not fully clear, the pattern is. The American economy has performed much better under Democratic administrations than Republican ones, over both the last few decades and the last century. And as Ms. Wanamaker said, “Administrations do certainly have the ability to affect economic outcomes.”

The Times is committed to publishing a diversity of letters to the editor. We’d like to hear what you think about this or any of our articles. Here are some tips. And here’s our email: letters@nytimes.com.