April’s job losses highlight the depth of the pandemic’s devastation. 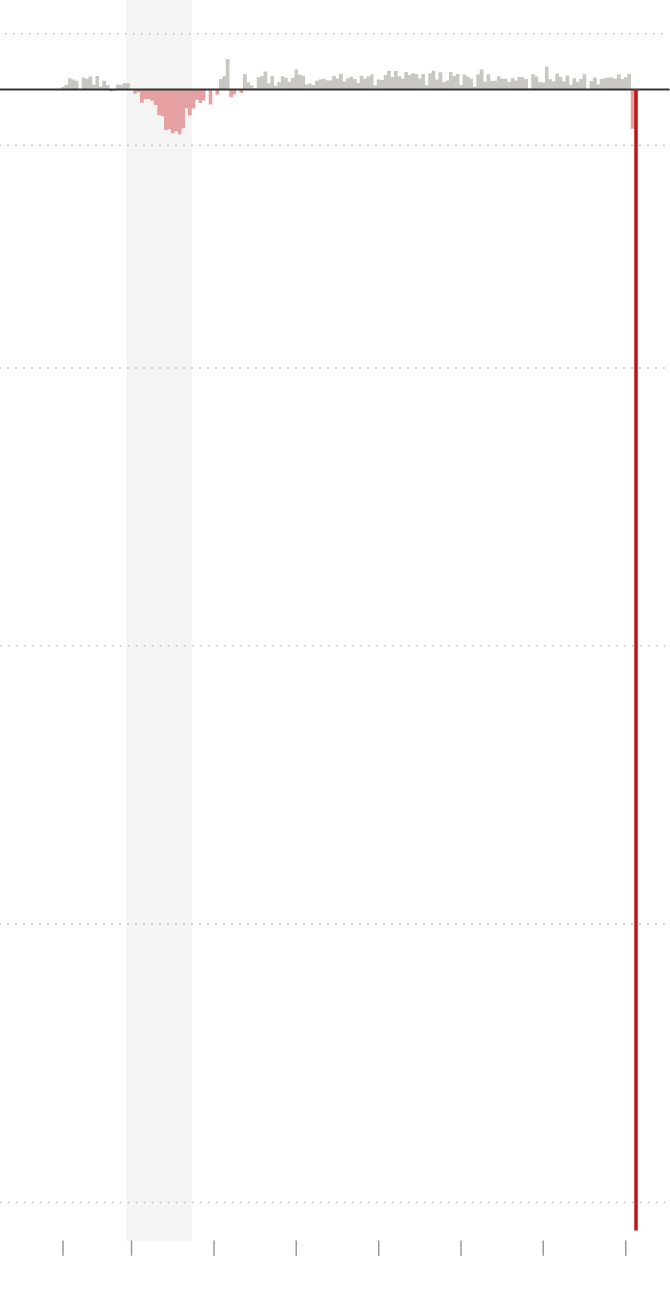 The Labor Department said Friday that the economy shed more than 20.5 million jobs in April, sending the unemployment rate to 14.7 percent — devastation unseen since the Great Depression.

The report underscores the speed and depth of the labor market’s collapse as the coronavirus pandemic took a devastating toll. In February, the unemployment rate was 3.5 percent, a half-century low. And even since the survey was taken, millions of people have filed claims for jobless benefits.

The April job losses alone far exceed the 8.7 million in the last recession, when unemployment peaked at 10 percent in October 2009. The only comparable period came when the rate reached about 25 percent in 1933, before the government began publishing official statistics.

If anything, the report understates the damage. The government’s definition of unemployment typically requires people to be actively looking for work. And the unemployment rate doesn’t reflect the millions still working who have had their hours slashed or their pay cut.

Many of the unemployed said they had been temporarily laid off and expected to return to their jobs. But the joblessness that began with layoffs in the leisure and hospitality industry has extended throughout the economy, from manufacturing and retail industries to white-collar redoubts like business services, meaning it will take longer for the labor market to recover.

But in an interview on Fox News on Friday, President Trump predicted the economy would come roaring back after the “artificial” closing.

“Those jobs will all be back and they’ll be back very soon,” Mr. Trump said, “and next year we’re going to have a phenomenal year.”

The unemployment rate for black workers jumped to 16.7 percent, nearly 3 times its level in February — before coronavirus shutdowns took hold — and the highest since early 2010.

For Hispanic or Latino workers, the unemployment rate jumped to 18.9 percent, up from 6 percent in March and the highest on records going back to the 1970s. That compares with an overall unemployment rate of 14.7 percent for the nation, and a 14.2 percent jobless rate for white workers.

The number is striking because employment gains among minorities, and black workers in particular, had been a major bright spot in the record-long expansion that preceded America’s coronavirus lockdown. The group’s record-low jobless rate had become a major talking point for President Trump and key Federal Reserve officials.

“We were hearing from a minority low and moderate income and minority communities that this was the best labor market they’d seen in their lifetime,” Jerome H. Powell, the Fed chair, said at his April 29 news conference. “It is heartbreaking, frankly, to see that all threatened now.”

And Friday’s jobs report — which showed that 20.5 million jobs were lost overall in April — had even worse news about the impact of the pandemic on minorities. A measure of the employment to population ratio reflected that some minorities left the work force entirely, and therefore weren’t counted as part of the officially “unemployed.” The employment to population rate for black Americans dipped to 48.8 percent in April, matching a 1982 low. Just 51.3 percent of Latino adults were employed in April, the lowest on record.

While white workers also shed huge numbers of jobs, history suggests that the major losses among minority groups are a reason to worry. Minority racial and ethnic groups have a disproportionately high share of low-wage workers, and are especially vulnerable to economic downturns. They are often the first to be fired, and the groups’s jobless rates spike higher.

A surge in temporary layoffs could be good news. 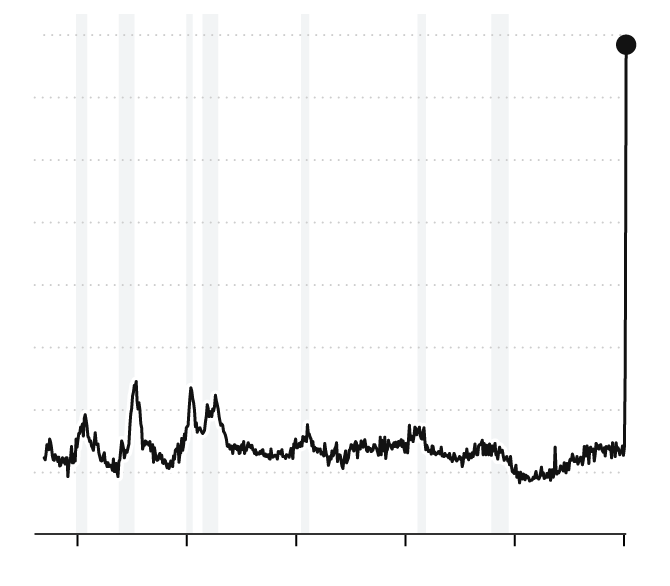 As tens of millions of Americans lost their jobs in April, 78.3 percent of them classified their separation as a temporary layoff, while 11.1 percent said their situation was permanent.

That is an unusually high share of people on temporary layoffs, and it could be good news for the economy. Temporary layoffs accounted for just 26.5 percent of job losses in March and 13.8 percent in February. In fact, the share was at an all-time high in records dating back to the 1960s.

Short-term job losses suggest that hiring may come back quickly when businesses reopen. According to Goldman Sachs, recessions over the past half century with a higher share of temporary layoffs have been followed by faster job recoveries.

A higher temporary share “would increase the scope for a more rapid labor market recovery when the economy eventually rebounds,” Goldman Sachs wrote, ahead of Friday’s jobs report.

Sign up to receive an email when we publish a new story about the coronavirus outbreak.

The S&P 500 rose about 1 percent in early trading. European markets were higher after a broadly positive day in Asia.

Investors were cheered by the prospects of countries further reopening their economies, despite worries that those efforts could lead to a rise in infections. They were also bolstered by announcements from the United States and China that appeared to back their Phase 1 trade deal, which would bring their two-year trade war to a temporary truce. The White House had openly questioned China’s commitment to the deal in recent days, hurting stocks.

The optimism was widespread. Prices for U.S. Treasury bonds, which generally rise in troubled times, were down in early Friday trading. Oil prices also rose.

But more grim economic data was released on Friday. The report on April payrolls in the United States is showed a loss of more than 20.5 million jobs — a breathtaking drop — and a sharp jump in the unemployment rate. Corporate earnings reports, too, are reflecting the heavy toll of the pandemic. Siemens, the European industrial giant, said profit fell 64 percent in the first quarter.

China and the United States announced on Friday that they had held high-level trade talks. And despite increasingly tough rhetoric from Washington on trade, senior trade officials from both countries appeared to reaffirm the Phase 1 trade agreement they reached in January, which brought about a truce in their nearly two-year trade war.

“Both sides agreed that good progress is being made on creating the governmental infrastructures necessary to make the agreement a success,” the Office of the United States Trade Representative said. “They also agreed that in spite of the current global health emergency, both countries fully expect to meet their obligations under the agreement in a timely manner.”

President Trump had rattled financial markets on Wednesday by promising to review by the end of next week whether China was meeting its obligations under the agreement for increased purchases of American goods.

China has been importing more American food since the pact was signed. But China’s overall imports of American goods have fallen short of the administration’s initial hopes, because the coronavirus pandemic has hurt Chinese consumer spending and investment.

The agreement itself set import targets over two years, however, not quarterly targets along the way. The trade representative office’s statement on Friday was less confrontational toward China than other recent statements from the administration have been.

Vice Premier Liu He of China spoke on a conference call with Robert Lighthizer, the trade representative, and Treasury Secretary Steven T. Mnuchin, both countries said.

“The two sides stated that they should strengthen macroeconomic and public health cooperation, strive to create a favorable atmosphere and conditions for the implementation of the first phase of the Sino-U.S. economic and trade agreement, and promote positive results,” China’s Ministry of Commerce said in a statement.

Li Mingqin’s factory in central China makes products for happy times, using feathers from chickens and other poultry to produce masquerade masks and badminton shuttlecocks. But with the pandemic, new orders have come to a screeching halt and she, like many other small business owners, wonders how she will survive.

She has more than 100 employees whom she has not paid in a month, and whom she promises to pay in June. She has hundreds of thousands of dollars’ worth of feathers and other supplies stacked in a warehouse.

While China has almost completely stamped out local transmission of the coronavirus, its financial regulators are trying hard to help the country’s small businesses weather the current global collapse in consumer demand. Commercial banks are now free to lend to small businesses part of the money that they previously had to park with the central bank. Regulators are calling bank chief executives daily to tell them to roll over the loans of small businesses.

Borrowers who miss payments on bank loans are not being penalized on their credit histories if they can come up with the money later. Companies that agree not to lay off employees are eligible for extra loans.

But tapping all of that credit requires having a banking relationship. The banks deal mainly with state-owned enterprises and some larger private businesses. Companies like Ms. Li’s, the Gelan Handicraft Factory in Anhui Province, have struggled to obtain bank loans. Instead, they rely mainly on borrowing from friends and relatives, many of whom now face their own financial difficulties.

Ms. Li has dismissed her nanny and started cooking for herself.

“My husband and I are under great pressure and often can’t sleep all night” worrying about the factory, she said. “I don’t know the future. I’m so confused. I don’t know how long it can last.”

A standoff between Amazon and French unions over safety measures for the coronavirus grew tenser on Thursday when the company said it would ask France’s highest court to overturn an appeals court decision last week that ordered the e-commerce giant to stop delivering nonessential items in the country during the pandemic to protect workers.

Amazon will also seek approval on Friday from workers councils, which represent about 10,000 employees, to keep its six mammoth French warehouses shut until May 13 as it consults with them on steps to further enhance safety measures against the virus.

“We are working hard to resume business as usual for our French customers, our French employees and our French sellers,” Amazon said in a statement.

Amazon’s warehouses in France have been shut for nearly a month since a court sided in mid-April with unions that had sued the company, accusing it of inadequately protecting workers from the threat of the virus and failing to consult with the unions on the measures, as required by law. The court ruled that Amazon must restrict deliveries to only food, hygiene and medical products until it addressed the issue, or face millions of euros in potential fines.

Rather than risk the penalty, Amazon put its work force on paid furlough, but it is continuing to deliver items to France from its centers in Belgium, German and Spain. The company has criticized the unions for bringing the lawsuit, which was upheld by the Versailles Court of Appeals last week. Amazon insists that it has maintained rigorous health safety at its French sites and has accused unions of seeking to further their own interests amid the health crisis.

Catch up: Here’s what else is happening.