One Simple Idea That Explains Why the Economy Is in Great Danger – The New York Times
https://www.nytimes.com/2020/03/17/upshot/coronavirus-economy-crisis-demand-shock.html?algo=top_conversion&fellback=false&imp_id=151573634&imp_id=586513264&action=click&module=Most%20Popular&pgtype=Homepage

To understand why the world economy is in grave peril because of the spread of coronavirus, it helps to grasp one idea that is at once blindingly obvious and sneakily profound.

One person’s spending is another person’s income. That, in a single sentence, is what the $87 trillion global economy is.

What is so deeply worrying about the potential economic ripple effects of the virus is that it requires this perpetual motion machine to come to a near-complete stop across large chunks of the economy, for an indeterminate period of time.

No modern economy has experienced anything quite like this. We simply don’t know how the economic machine will respond to the damage that is starting to occur, nor how hard or easy it will be to turn it back on again.

Thanks to government statistical tables, we can understand the sheer size of the economic sectors that appear to be entering a near shutdown. The United States and much of the world are on the verge of a tremendous shrinkage in consumption spending, which in turn will mean less economic output and lower incomes among the people who provide those services.

The Bureau of Economic Analysis tables of personal consumption expenditures include three categories likely to see very sharp declines in the weeks ahead. Americans spent $478 billion on transportation services in 2019 (which includes things like airfare and train fare but not the purchase of personal automobiles).

They spent $586 billion on recreation services (think tickets to sports events or gambling losses in a casino). And they spent $1.02 trillion on food services and accommodation (restaurant meals and hotel stays, but not grocery store food brought home).

That adds up to $2.1 trillion a year, 14 percent of total consumption spending — which appears likely to dry up for at least a few weeks and maybe longer. We don’t know how much those consumption numbers will drop, and for how long, just that it will be by a lot.

So what might such a collapse in spending in those major categories mean for the other side of the ledger, incomes?

That revenue from those sectors goes a lot of places. It pays employees for their labor directly. It goes to suppliers. It pays taxes that finance the police and schoolteachers, rent that rewards property owners, and profits that accrue to investors. All of those flows of cash are in danger as consumption spending plunges.

The five sectors experiencing the most direct and immediate collapse in demand or facing government-mandated shutdowns because of coronavirus are air transportation; performing arts and sports; gambling and recreation; hotels and other lodging; and restaurants and bars.

Together, they accounted for $574 billion in total employee compensation in 2018, about 10 percent of the total. It was spread among 13.8 million full-time equivalent employees.

Those numbers represent the share of the economy at most direct risk. These are the industries and workers where revenue is likely to plummet; they will simply not have enough revenue to fulfill their usual obligations. In danger is the $11 billion a week they normally pay their employees, not to mention all those payments for rent, debt service and property taxes. 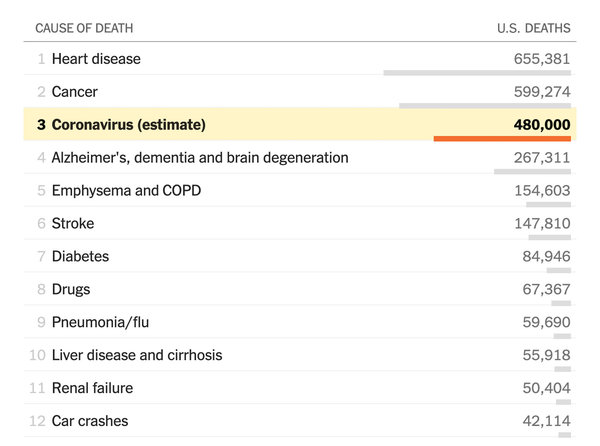 Could Coronavirus Cause as Many Deaths as Cancer in the U.S.? Putting Estimates in Context

How the best- and worst-case scenarios compare with other common killers.

It is true that there will be some offsetting effects — more food bought from grocery stores rather than restaurants, for example, and greater health care spending. But the economy can’t adjust on a dime, and the fact that doctors, nurses and grocery store clerks may end up working longer hours won’t make up for millions of waiters, flight attendants and hotel housekeepers who are likely to see their incomes plunge.

Just the potential initial effects from all those restaurant meals not eaten, hotel rooms sitting empty and aircraft temporarily mothballed are potentially huge. And that’s before accounting for the ways those could ripple into second- and third-order effects.

What happens if widespread bankruptcies were to cause losses in the banking system and cause a tightening of credit across the economy? In that situation, companies with perfectly sound finances today — which should be able to ride out the crisis — could find themselves unable to carry on simply because of a cash crunch. (That, incidentally, is the kind of ripple effect that the Federal Reserve and the Trump administration are desperately trying to head off).

Or what if the plunging price of oil (caused by both geopolitical machinations and the global collapse of demand resulting from coronavirus effects) leads to widespread job losses and bankruptcies in energy-producing areas?

These are hardly fanciful scenarios; the financial markets are signaling that they are quite plausible. But they show that, even as consequential as the initial economic hit from everyone staying at home may be, it might only be the beginning of economic troubles.

It’s tempting to look at another recent event when much of the economy, especially tied to travel, seemed to dry up overnight. But the more you look at the actual numbers of what happened to key industries after the Sept. 11, 2001, terrorist attacks, the milder it looks compared with what is happening now.

Consider restaurants. Americans spent $26.9 billion at restaurants and bars in August 2001, and $26.2 billion in September 2001, a mere 2.3 percent drop. By December of that year, sales were back above August levels (numbers adjusted for ordinary seasonal variations).

The cumulative shortfall of restaurant sales that autumn compared with a world where they had held steady at August levels was about $1.2 billion, a trivial amount in what was then a $10.6 trillion economy. Employment in the food service sector reached a trough of 8.4 million jobs in October 2001, only about 16,000 below its August level.

It seems improbable that the coronavirus shutdown will have such mild effects on that industry. There is a big difference between a slump in business because people are not in the mood to celebrate, and one mandated by citywide shutdowns or other restrictions on business activity.

For weeks, as the novel coronavirus spread, a common line among economists was that it would cause a “supply shock,” limiting the availability of certain manufactured goods made in China.

But huge swaths of the economy are starting to experience the biggest demand shock any of us have ever seen. And we’ll soon find out what happens once a mighty economic machine gets a microscopic, yet potent, virus in its gears.

Neil Irwin is a senior economics correspondent for The Upshot. He is the author of “How to Win in a Winner-Take-All-World,” a guide to navigating a career in the modern economy. @Neil_Irwin • Facebook