‘We Are Like Animals’: Inside Greece’s Secret Site for Migrants – The New York Times
https://www.nytimes.com/2020/03/10/world/europe/greece-migrants-secret-site.html?action=click&module=Top%20Stories&pgtype=Homepage

POROS, Greece — The Greek government is detaining migrants incommunicado at a secret extrajudicial location before expelling them to Turkey without due process, one of several hard-line measures taken to seal the borders to Europe that experts say violate international law.

Several migrants said in interviews that they had been captured, stripped of their belongings, beaten and expelled from Greece without being given a chance to claim asylum or speak to a lawyer, in an illegal process known as refoulement. Meanwhile, Turkish officials said that at least three migrants had been shot and killed while trying to enter Greece in the past two weeks.

The Greek approach is the starkest example of European efforts to prevent a reprise of the 2015 migration crisis in which more than 850,000 undocumented people passed relatively easily through Greece to other parts of Europe, roiling the Continent’s politics and fueling the rise of the far right.

If thousands more refugees reach Greece, Greek officials fear being left to care for them for years, with little support from other members in the European Union, exacerbating social tensions and further fraying a strained economy. Tens of thousands of migrants already live in squalor on several Greek islands, and many Greeks feel they have been left to shoulder a burden created by wider European indifference.

The Greek government has defended its actions as a legitimate response to recent provocations by the Turkish authorities, who have transported thousands of migrants to the Greek-Turkish border since late February and have encouraged some to charge and dismantle a border fence.

The Greek authorities have denied reports of deaths along the border. A spokesman for the Greek government, Stelios Petsas, did not comment on the existence of the site, but said that Greece detained and expelled migrants in accordance with local law. An act passed March 3, by presidential decree, suspended asylum applications for a month and allowed immediate deportations.

But through a combination of on-the-ground reporting and forensic analysis of satellite imagery, The Times has confirmed the existence of the secret center in northeastern Greece.

Presented with diagrams of the site and a description of its operations, François Crépeau, a former U.N. Special Rapporteur on the human rights of migrants, said it was the equivalent of a domestic “black site,” since detainees are kept in secret and without access to legal recourse. 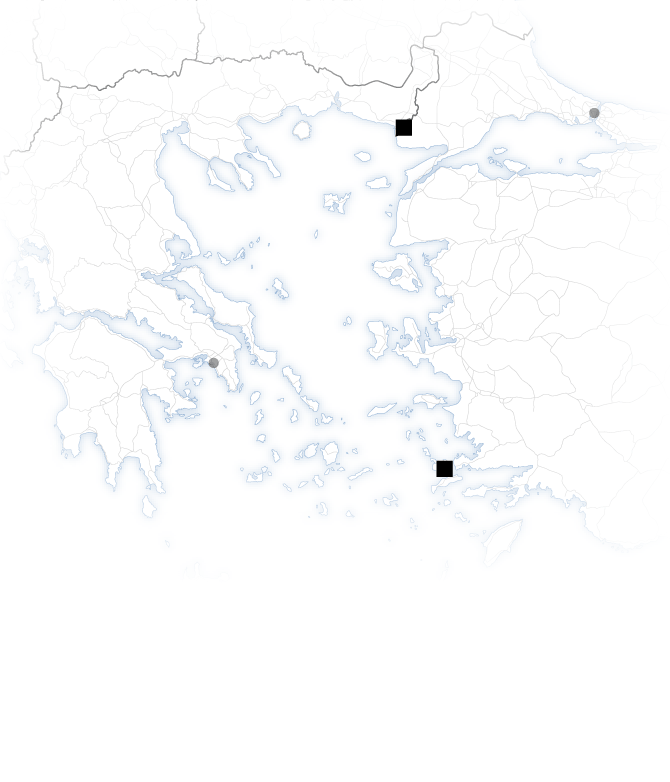 1. Migrants who crossed the border here were held at a nearby black site. Another was shot and killed.

2. The Greek Coast Guard violently pushed back migrants on a dinghy here.

Using footage supplied to several media outlets, The Times has also established that the Greek Coast Guard, nominally a lifesaving institution, fired shots in the direction of migrants onboard a dinghy that was trying to reach Greek shores early this month, beat them with sticks and sought to repel them by driving past them at high speed, risking tipping them into water.

Forensic analysis of videos provided by witnesses also confirmed the death of at least one person — a Syrian factory worker — after he was shot on the Greek-Turkish border.

When Turkish officials began to bus migrants to the Greek border on Feb. 28, a Syrian Kurd named Somar al-Hussein had a seat on one of the first coaches.

Turkey already hosts more refugees than any other country — over four million, mostly Syrians — and fears that it may be forced to admit another million because of a recent surge in fighting in northern Syria. To alleviate this pressure, and to force Europe to do more to help, it has weaponized refugees like Mr. al-Hussein by shunting them toward the Continent.

Mr. al-Hussein, a trainee software engineer, spent that night in the rain on the bank of the Evros River, which divides western Turkey from eastern Greece. Early the next morning, he reached the Greek side in a rubber dinghy packed with other migrants.

But his journey ended an hour later, he said in a recent interview. Captured by Greek border guards, he said, he and his group were taken to a detention site. Following the group’s journey on his mobile phone, he determined that the site was a few hundred yards east of the border village of Poros.

The site consisted principally of three red-roofed warehouses set back from a farm road and arranged in a U-shape. Hundreds of other captured migrants waited outside. Mr. al-Hussein was taken indoors and crammed into a room with dozens of others.

His phone was confiscated to prevent him from making calls, he said, and his requests to claim asylum and contact United Nations officials were ignored.

“To them, we are like animals,” Mr. al-Hussein said of the Greek guards.

After a night without food or drink, on March 1 Mr. al-Hussein and dozens of others were driven back to the Evros River, where Greek police officers ferried them back to the Turkish side in a small speedboat.

Mr. al-Hussein was one of several migrants to provide similar accounts of extrajudicial detentions and expulsions, but his testimony was the most detailed.

By cross-referencing drawings, descriptions and satellite coordinates that he provided, The Times was able to locate the detention center — in farmland between Poros and the river.

A former Greek official familiar with police operations confirmed the existence of the site, which is not classified as a detention facility but is used informally during times of high migration flows.

On Friday, three Times journalists were stopped at a roadblock near the site by uniformed police officers and masked special forces officers.

The site’s existence was also later confirmed by Respond, a Sweden-based research group. 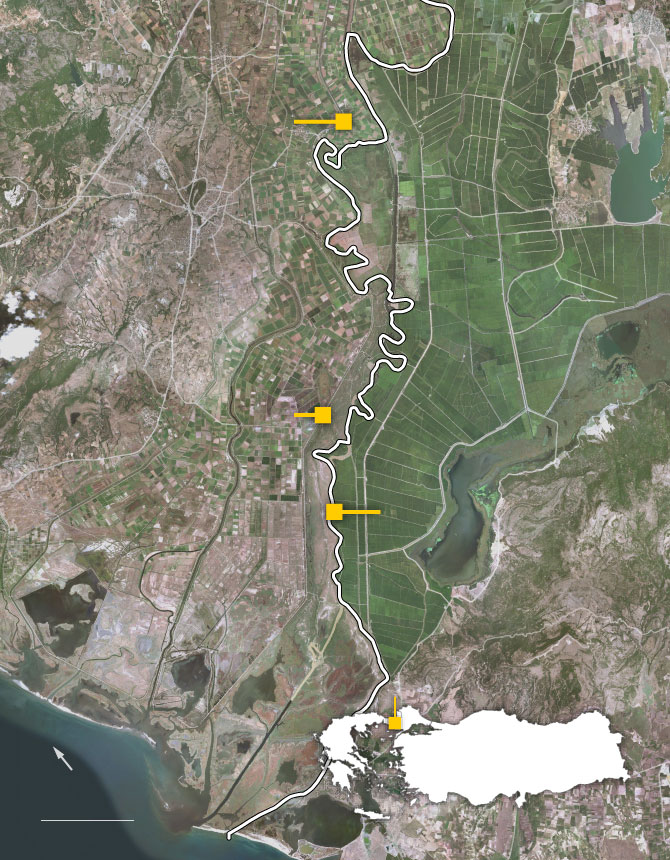 to this black site.

River into Greece in

Mr. Crépeau, now a professor of international law at McGill University, said the center represented a violation of the right to seek asylum and “the prohibition of cruel, inhuman and degrading treatment, and of European Union law.”

Hundreds of miles to the south, in the straits of the Aegean Sea between the Turkish mainland and an archipelago of Greek islands, the Greek Coast Guard is also using force.

On March 2, a Coast Guard ship violently repelled an inflatable dinghy packed with migrants, in an incident that Turkish officials captured on video, which they then distributed to the press.

The footage shows the Coast Guard vessel and an unmarked speedboat circling the dinghy. A gunman on one boat shot at least twice into waters by the dinghy, with what appeared to be a rifle, before men from both vessels shoved and struck the dinghy with long black batons.

It is not clear from the footage whether the man was firing live or non-lethal rounds.

Mr. Petsas, the government spokesman, did not deny the incident, but said the Coast Guard did not fire live rounds.

The larger Greek boat also sought to tip the migrants into the water by driving past them at high speed.

Forensic analysis by The Times shows that the incident took place near the island of Kos after the migrants had clearly entered Greek waters.

“The action of Greek Coast Guard ships trying to destabilize the refugees’ fragile dinghies, thus putting at risk the life and security of their passengers, is also a violation,” said Mr. Crépeau, the former United Nations official.

A Killing on Land

The most contested incident concerns the lethal shooting of Mohammed Yaarub, a 22-year-old Syrian from Aleppo who tried to cross Greece’s northern land border with Turkey last week.

The Greek government has dismissed his death as “fake news” and denied that anyone has died at the border during the past week.

An analysis of videos, coupled with interviews with witnesses, confirmed that Mr. Yaarub was killed on the morning of March 2 on the western bank of the Evros River.

Mr. Yaarub had lived in Turkey for five years, working at a shoe factory, according to Ali Kamal, a friend who was traveling with him. The two friends crossed the Evros on the night of March 1 and camped with a large group of migrants on the western bank of the river.

By a cartographical quirk, they were still in Turkey: Although the river mostly serves as the border between the two countries, this small patch of land is one of the few parts of the western bank that belongs to Turkey rather than Greece.

Mr. Kamal last saw his friend alive around 7:30 a.m. the next morning, when the group began walking to the border. The two men were separated, and soon Greek security forces blocked them, according to another Syrian man who filmed the aftermath of the incident and was later interviewed by The Times. He asked to remain anonymous because he feared retribution.

During the confrontation, Mr. Yaarub began speaking to the men who were blocking their path and held up a white shirt, saying that he came in peace, the Syrian man said.

There is no known video of the moment of impact, but several videos captured his motionless body being carried away from the Greek border and toward the river.

Several migrants who were with Mr. Yaarub at the time of his death said a Greek security officer had shot him.

Using video metadata and analyzing the position of the sun, The Times confirmed that he was shot around 8:30 a.m., matching a conclusion reached by Forensic Architecture, an investigative research group.

Video shows that it took other migrants about five minutes to ferry Mr. Yaarub’s body back across the river and to a car. He was then taken to an ambulance and later a Turkish hospital.

An analysis of other footage shot elsewhere on the border showed that Greek security forces used lethal and non-lethal ammunition in other incidents that day, likely fired from a mix of semiautomatic and assault rifles.

Mr. Petsas, the government spokesman, defended Greece’s tough actions as a reasonable response to “an asymmetrical and hybrid attack coming from a foreign country.”

Besides ferrying migrants to the border, the Turkish police also fired tear-gas canisters in the direction of Greek security forces and stood by as migrants dismantled part of a border fence, footage filmed by a Times journalist showed.

Before this evidence of violence and secrecy had surfaced, Greece won praise from leaders of the European Union, who visited the border on March 3.

“We want to express our support for all you did with your security services for the last days,” said Charles Michel, the president of the European Council, the bloc’s top decision-making body.

The European Commission, the bloc’s administrative branch, said that it was “not in a position to confirm or deny” The Times’s findings, and called on the Greek justice system to investigate.