WASHINGTON — House Democrats on Tuesday released a 300-page impeachment report asserting that President Trump abused his power by trying to enlist Ukraine to help him in the 2020 presidential election. The report said that Mr. Trump “placed his own personal and political interests above the national interests of the United States,” seeking to undermine American democracy and endangering national security.

The document, drawn up by the House Intelligence Committee that has led the inquiry into Mr. Trump’s dealings with Ukraine, left it to another panel to decide whether to recommend his impeachment and removal. But it laid out in searing fashion what are all but certain to be the grounds on which the Democratic-led House moves to impeach the president.

The lengthy document outlined more than two months of public and private testimony from diplomats and other administration officials who described a campaign by the president and his allies to pressure Ukraine for investigations of former Vice President Joseph R. Biden Jr. and other Democrats, while withholding nearly $400 million in military assistance and a White House meeting for Ukraine’s president.

“The impeachment inquiry into Donald J. Trump, the 45th President of the United States, uncovered a monthslong effort by President Trump to use the powers of his office to solicit foreign interference on his behalf in the 2020 election,” said the report, released ahead of a vote Tuesday evening by the Intelligence Committee to formally approve it. It asserts that Mr. Trump’s “scheme subverted U.S. foreign policy toward Ukraine and undermined our national security in favor of two politically motivated investigations that would help his presidential re-election campaign.” 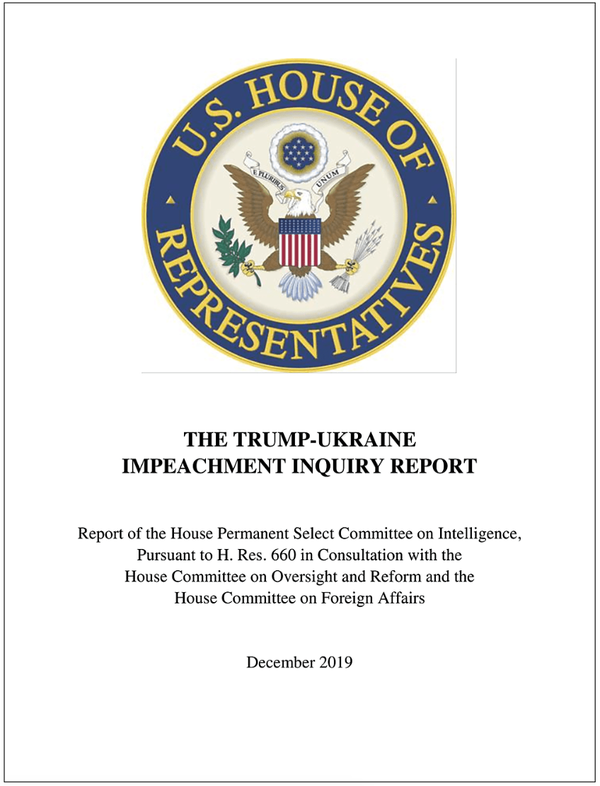 Read the House Democrats’ Report on the Impeachment Inquiry

The report also lays out what it calls an “unprecedented campaign of obstruction of this impeachment inquiry” by Mr. Trump, in light of his move to prevent the release of documents from agencies including the State Department, the Department of Defense and the White House budget office and instructing potential witnesses not to cooperate.

“The damage to our system of checks and balances, and to the balance of power within our three branches of government, will be long-lasting and potentially irrevocable if the president’s ability to stonewall Congress goes unchecked,” the report concluded. “Any future president will feel empowered to resist an investigation into their own wrongdoing, malfeasance, or corruption, and the result will be a nation at far greater risk of all three.”

The report is a watershed moment for the months-old inquiry. Its delivery sets in motion the next phase in the impeachment of Mr. Trump, accelerating a constitutional clash that has happened only three times in the nation’s history. Both parties are poised for a fierce, partisan debate in the House Judiciary Committee over whether the president should be removed from office.

The Judiciary Committee is scheduled to begin its debate on Wednesday with a public hearing that features four constitutional scholars discussing the historical standards for impeachment and their assessment about whether Mr. Trump’s actions constitute “high crimes and misdemeanors” that warrant his removal from office.

Lawyers for the Intelligence Committee are expected to formally present the report to the Judiciary panel and answer questions from its members in the coming days, though no hearing has been scheduled. Mr. Trump’s Republican allies on Capitol Hill released their own report on Monday, condemning the Democratic impeachment effort as illegitimate, and asserting that the president was not seeking personal political advantage when he pressed Ukraine’s leaders to investigate his rivals, but was instead urging the country to address corruption.

In London for a NATO meeting, Mr. Trump accused Democrats of trying to overturn the results of the 2016 elections, saying the impeachment inquiry “turned out to be a hoax.”

“It’s done for purely political gain,” Mr. Trump continued. “They’re going to see whether or not they can do something in 2020, because otherwise they’re going to lose.”

The Intelligence Committee is also expected to vote to transmit all the raw evidence it collected to the Judiciary Committee. Though Representative Adam B. Schiff, Democrat of California and the chairman of the Intelligence panels, has indicated that investigative work could continue, the report largely brings an end his committee’s inquiry, which began after Speaker Nancy Pelosi formally opened the impeachment inquiry in late September.

The Judiciary Committee will also consider potential evidence presented by other investigative committees — and renew an earlier debate among Democrats over whether Mr. Trump should be impeached for his attempts to thwart attempts by Robert S. Mueller III, the former special counsel, to investigate Russia’s interference in the 2016 election and any connections to the Trump campaign.

If a majority of the House voted to approve articles of impeachment, which would be drafted by the Judiciary Committee, the president would be impeached. The proceedings would move to the Senate for a trial. Two-thirds of senators would have to vote to convict Mr. Trump to end his presidency.