By Peter Baker and Nicholas Fandos

WASHINGTON — The effort to pressure Ukraine for political help provoked a heated confrontation inside the White House last summer that so alarmed John R. Bolton, then the national security adviser, that he told an aide to alert White House lawyers, House investigators were told on Monday.

Mr. Bolton got into a tense exchange on July 10 with Gordon D. Sondland, the Trump donor turned ambassador to the European Union, who was working with Rudolph W. Giuliani, the president’s personal lawyer, to press Ukraine to investigate Democrats, according to three people who heard the testimony.

The aide, Fiona Hill, testified that Mr. Bolton told her to notify the chief lawyer for the National Security Council about a rogue effort by Mr. Sondland, Mr. Giuliani and Mick Mulvaney, the acting White House chief of staff, according to the people familiar the testimony.

“I am not part of whatever drug deal Sondland and Mulvaney are cooking up,” Mr. Bolton, a Yale-trained lawyer, told Ms. Hill to tell White House lawyers, according to two people at the deposition. (Another person in the room initially said Mr. Bolton referred to Mr. Giuliani and Mr. Mulvaney, but two others said he cited Mr. Sondland.)

It was not the first time Mr. Bolton expressed grave concerns to Ms. Hill about the campaign being run by Mr. Giuliani. “Giuliani’s a hand grenade who’s going to blow everybody up,” Ms. Hill quoted Mr. Bolton as saying during an earlier conversation.

The testimony revealed in a powerful way just how divisive Mr. Giuliani’s efforts to extract damaging information about Democrats from Ukraine on President Trump’s behalf were within the White House. Ms. Hill, the senior director for European and Russian affairs, testified that Mr. Giuliani and his allies circumvented the usual national security process to run their own foreign policy efforts, leaving the president’s official advisers aware of the rogue operation yet powerless to stop it.

At one point, she confronted Mr. Sondland, who had inserted himself into dealings with Ukraine even though it was not part of his official portfolio, according to the people informed about Ms. Hill’s testimony.

According to whom, she asked.

The president, he answered.

Ms. Hill was the first former White House official to testify in the House impeachment inquiry, and her account provided a gripping in-the-room view of the shadow maneuvers that have jeopardized Mr. Trump’s presidency. While she left her post shortly before the now-famous July 25 telephone call in which Mr. Trump pressed Ukraine’s president to investigate Democrats, she helped House investigators understand the early months of the pressure campaign.

The daylong interview with Ms. Hill came as House Democrats widened their net in the fast-paced inquiry by summoning Michael McKinley, a senior adviser to Secretary of State Mike Pompeo who abruptly resigned last week, to testify Wednesday.

Career diplomats have expressed outrage at the unceremonious removal of Ambassador Marie L. Yovanovitch from Ukraine after she came under attack by Mr. Giuliani, Donald Trump Jr. and two associates who have since been arrested on charges of campaign violations.

The interviews indicated that House Democrats were proceeding full tilt with their inquiry despite the administration’s declaration last week that it would refuse to cooperate with what it called an invalid and unconstitutional impeachment effort.

Three other administration officials were scheduled to talk with investigators this week despite the White House statement. Mr. Sondland, who backed out of testifying at the last minute last week on orders of the State Department, is now set to appear on Thursday.

[Rudy Giuliani was a zero-tolerance mayor who cleaned up New York as he inflamed racial tensions. He was hailed as “America’s Mayor” after 9/11. Now, he’s at the center of the Trump impeachment inquiry. Watch “The Weekly,” our new TV show.]

Mr. Trump made no visible effort to block the testimony on Monday, even as he called on House Democrats to interview the anonymous C.I.A. officer who first filed a whistle-blower complaint alleging that the president abused the power of his office by pressuring Ukraine to investigate former Vice President Joseph R. Biden Jr. and other Democrats. 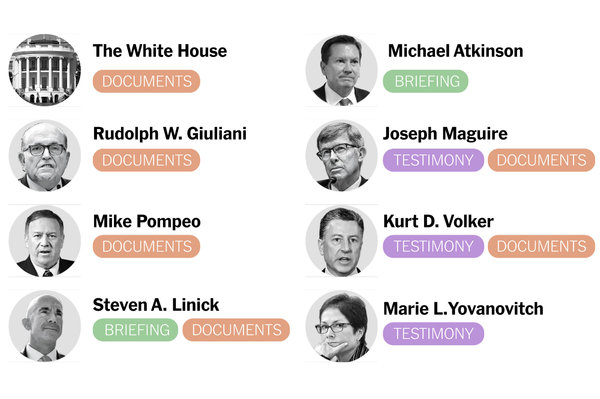 Subpoenas and Requests for Evidence in the Trump Impeachment Inquiry

The status of the documents and witness testimony being collected by congressional investigators.

“A total Impeachment Scam!” Mr. Trump wrote on Twitter. Later in the day, he posted a number of video clips of Mark Levin on Fox News excoriating the Democrats for pursuing impeachment, quoting the television host calling it “a silent COUP effort.”

Ms. Hill’s testimony, which unfolded behind closed doors over nine hours in the secure rooms of the House Intelligence Committee on Capitol Hill, had been highly anticipated because of her position in a key job coordinating policy toward Russia, Ukraine and the rest of Europe.

The House Intelligence Committee issued a last-minute subpoena Monday morning to compel Ms. Hill to speak with the investigators, according to an official involved in the inquiry, to make it easier for her to justify ignoring the White House’s clear opposition to cooperation with the House inquiry.

Ms. Hill testified that she opposed the idea of the July 25 telephone call between Mr. Trump and President Volodymyr Zelensky of Ukraine because she did not understand its purpose. While it was described as a congratulatory call following parliamentary elections in Ukraine, Mr. Trump had already made a congratulatory call to Mr. Zelensky in April after his own election.

She was not told that Mr. Trump would use the call to press for an investigation into Mr. Biden, nor did she know about the president’s decision to withhold $391 million in American assistance to Ukraine until shortly before her departure, according to one person informed about her account.

Her testimony did not establish a quid pro quo between the suspended aid and Mr. Trump’s pressure for investigations, according to the person. But she confirmed that the administration leveraged a coveted White House invitation for Mr. Zelensky to a commitment to investigate corruption, which was seen as code for investigating Democrats.

Ms. Hill is a widely respected, British-born former Brookings Institution scholar and intelligence officer. She is the author, with Clifford Gaddy, of “Mr. Putin,” a critical biography of the Russian leader, and she was appointed senior director for Russian and Eurasian affairs on the National Security Council staff in 2017. She turned over her duties to her successor on July 15 and left on July 19, just days before the July 25 call.

For much of her tenure, Ms. Hill found herself caught in the middle, a noted skeptic of Mr. Putin working for a president who valued his friendship with the Russian leader. She came under fire from some of the most conservative figures and news media outlets around Mr. Trump, which portrayed her as an enemy within, even as some of her longtime friends and colleagues expressed disapproval that she had gone to work for the president in the first place.

One of the most dramatic moments she described came in the July 10 meeting in Mr. Bolton’s office that included Mr. Sondland; Kurt D. Volker, then the special envoy for Ukraine; Rick Perry, the energy secretary; and two Ukrainian officials.

The purpose of the meeting was to talk about technical assistance to Ukraine’s national security council. The Ukrainians were eager to set up a meeting between Mr. Trump and Mr. Zelensky, who was elected on a promise to clean up corruption and resolve the country’s five-year war with Russian-armed separatists.

Mr. Bolton was trying to not commit to a meeting, according to Ms. Hill’s testimony. Mr. Sondland got agitated, Ms. Hill testified, and let out that there was an agreement with Mr. Mulvaney that there would be a meeting if Ukraine opened up the investigations the White House was seeking.

Mr. Bolton immediately ended the meeting abruptly. As the group moved toward the door, Mr. Sondland said he wanted them to come down to the ward room next to the White House mess to discuss next steps. Mr. Bolton pulled Ms. Hill aside to instruct her to go to the ward room and report to him what they talked about.

When she got downstairs, Mr. Sondland was talking with the Ukrainians and specifically mentioned Burisma, the Ukrainian energy firm that had Hunter Biden, the former vice president’s son, on its board.

Ms. Hill testified that she asked Mr. Sondland why he would be discussing this in front of their Ukrainian colleagues and tried to shuffle them out of the room and break things up.

At one point, Mr. Sondland mentioned Mr. Giuliani, who was involved in the discussions about a possible meeting between the two presidents.

Ms. Hill went back upstairs and reported the encounter to Mr. Bolton, who promptly instructed her to report the issue to John A. Eisenberg, a deputy White House counsel and the chief legal adviser for the National Security Council, along with his line about the drug deal, which he meant metaphorically.

Mr. Eisenberg told Ms. Hill he would report it up his chain of command, which would typically mean Pat Cipollone, the White House counsel. It was uncertain what he did at that point. But when the C.I.A. whistle-blower later filed his complaint, the agency’s chief lawyer called Mr. Eisenberg at the White House. After several discussions over the following week, they decided the accusations had a reasonable basis.

A version of this article appears in print on Oct. 15, 2019, Section A, Page 1 of the New York edition with the headline: Bolton, Leery of Ukraine, Saw Giuliani as ‘Grenade’. Order Reprints | Today’s Paper | Subscribe
Tags: environment