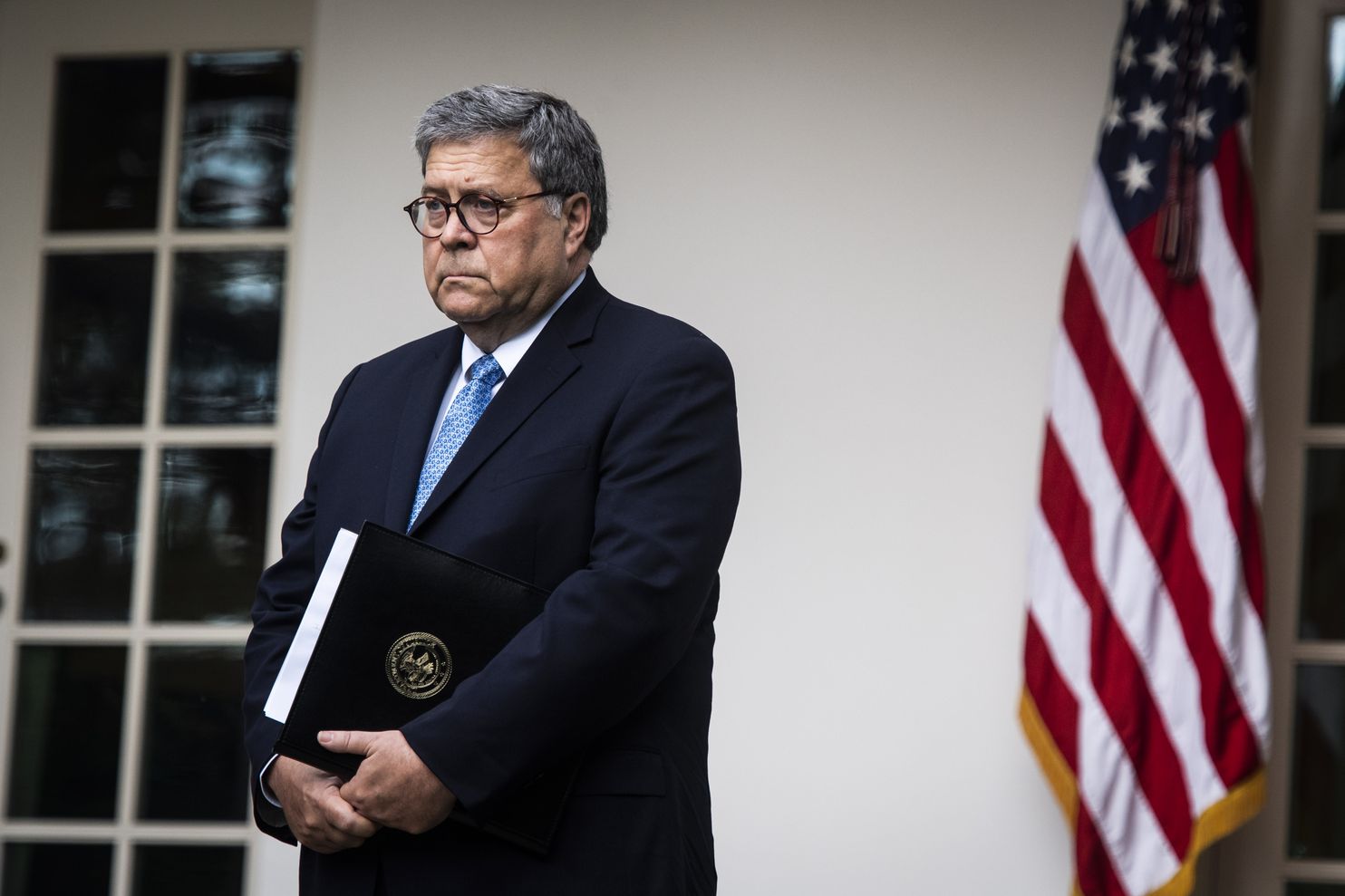 Attorney General William P. Barr has held private meetings overseas with foreign intelligence officials seeking their help in a Justice Department inquiry that President Trump hopes will discredit U.S. intelligence agencies’ examination of possible connections between Russia and members of the Trump campaign during the 2016 election, according to people familiar with the matter.

Barr’s personal involvement is likely to stoke further criticism from Democrats pursuing impeachment that he is helping the Trump administration use executive branch powers to augment investigations aimed primarily at the president’s adversaries.

But the high level Justice Department focus on intelligence operatives’ conduct will likely cheer Trump and other conservatives for whom “investigate the investigators” has become a rallying cry. Barr has voiced his own concerns, telling lawmakers in April that he believed “spying did occur” when it came to the U.S. investigation of the Trump campaign.

The direct involvement of the nation’s top law enforcement official shows the priority Barr places on the investigation being conducted by John Durham, the U.S. attorney in Connecticut, who has been assigned the sensitive task of reviewing U.S. intelligence work surrounding the 2016 election and its aftermath.

The attorney general’s active role also underscores the degree to which a nearly three-year old election still consumes significant resources and attention inside the federal government. Current and former intelligence and law enforcement officials expressed frustration and alarm Monday that the head of the Justice Department was taking such a direct role in re-examining what they view as conspiracy theories and baseless allegations of misconduct.

Barr has already made overtures to British intelligence officials, and last week the attorney general traveled to Italy, where he and Durham met senior Italian government officials and Barr asked the Italians to assist Durham, according to one person familiar with the matter. It was not Barr’s first trip to Italy to meet intelligence officials, the person said. The Trump administration has made similar requests of Australia, these people said.

A White House spokeswoman referred questions to the Justice Department.

Kerri Kupec, a Justice Department spokeswoman, said, “Mr. Durham is gathering information from numerous sources, including a number of foreign countries. At Attorney General Barr’s request, the President has contacted other countries to ask them to introduce the Attorney General and Mr. Durham to appropriate officials.”

In a statement, a spokesperson for the Australian government said it has “always been ready to assist and cooperate with efforts that help shed further light on the matters under investigation. The [prime minister] confirmed this readiness once again in conversation with the President.”

Trump still complains frequently that those involved in the investigation of his campaign should be charged with crimes, asserting the FBI search for possible election season collusion between Russia and Trump campaign officials was a witch hunt, spurred by agents and bureaucrats opposed to Trump becoming president. That investigation ended earlier this year when special counsel Robert S. Mueller III determined there was insufficient evidence to charge any Americans with conspiring with Russia, and declined to reach a decision about whether the president had sought to obstruct justice.

David Laufman, a former Justice Department official who was involved in the early stages of the Russia probe, said it was “fairly unorthodox for the attorney general personally to be flying around the world as a point person to further evidence-gathering for a specific Justice Department investigation,” and especially so in Barr’s case.

“Even if one questions, as a threshold matter, the propriety of conducting a re-investigation of the Justice Department’s own prior investigation of Russia’s interference, the appointment of John Durham — a seasoned, nonpartisan prosecutor — provided some reason to believe that it would be handled in a professional, nonpartisan manner,” Laufman said. “But if the attorney general is essentially running this investigation, that entire premise is out the window.”

Barr’s direct involvement in the effort also helps explain part of the controversial July phone call between Trump and Ukrainian President Volodymyr Zelensky. A rough transcript of that call shows Trump said he wanted Ukrainian assistance to help find out “what happened with this whole situation with Ukraine,” and possible involvement with the Democratic National Committee computer system that U.S. agencies have determined was hacked by Russian intelligence ahead of the 2016 election.

Some of the president’s supporters have suggested Ukraine had a more direct role in the 2016 investigation than currently known, an assertion denied by current and former officials who were involved in the original probe.

A person familiar with Barr’s interactions with foreign officials described them as being official introductions to Durham. The attorney general “is telling people he wants to make sure that the rules governing U.S. agencies have been followed,” this person said.

A spokesperson for the CIA declined to comment, citing the ongoing review.

A former senior U.S. intelligence official denied the CIA was involved in monitoring any members of the Trump campaign. Any such operations were conducted by the FBI and were lawful, the former official said, emphasizing that the CIA focused on Russia’s interference in the election and the role that Russian officials and intelligence agencies played.

Democrats are likely to bristle at the notion of the attorney general devoting personal time and energy to traveling overseas asking foreign countries to assist in an investigation of U.S. agencies and personnel, particularly since Democrats have accused Barr in the past of acting in Trump’s interests at the expense of the Justice Department’s independence.

Last week, House Speaker Nancy Pelosi (D-Calif.) accused the attorney general of “going rogue” because the Justice Department determined the substance of an explosive whistleblower’s complaint alleging that Trump pressured Zelensky to investigate Democratic presidential candidate Joe Biden and his son Hunter, over Hunter Biden’s past position on the board of a Ukrainian energy company.

House Democrats have launched an impeachment inquiry to further probe the interactions of Trump and his lawyer with the Ukrainians.

During the call with his Ukrainian counterpart, Trump suggested Barr and his personal lawyer, Rudolph W. Giuliani, could help Zelensky’s government investigate the matter. A spokeswoman for Barr has said the attorney general was unaware of any such effort, and had not spoken to the president about the issue, nor to Ukrainian authorities.

Giuliani has met with Ukrainian officials and urged them to investigate the Bidens, but insists there is nothing improper about that. Giuliani has declined to discuss Durham’s investigation.

Barr’s conversations with foreign counterparts have raised concerns among some intelligence officials that he may be seeking to substantiate conspiracy theories raised by some on the political right to defend Trump.

One area that has been of sustained interest to Barr and Durham, according to people familiar with the matter, is a murky figure named Joseph Mifsud.

Mifsud, a European academic, was publicly linked to Russian interference efforts in late 2017, when Mueller revealed a guilty plea by former Trump campaign staffer George Papadopoulos, who admitted he’d lied to the FBI about the details of his interactions with Mifsud.

Those conversations included an April 2016 meeting in which Mifsud allegedly alerted Papadopoulos that the Russians had “dirt” on Hillary Clinton, in the form of thousands of emails.

A version of that conversation was relayed to U.S. authorities later that summer by an Australian diplomat who had talked to Papadopoulos over drinks in London.

Shortly after his name surfaced publicly, Mifsud told Italian media he did not work for Russia. “I never got any money from the Russians: my conscience is clear,” Mifsud told La Repubblica. “I am not a secret agent.”

Since then, the professor has disappeared from public life, leading to a host of theories about him and his whereabouts. While court papers filed in Mueller’s investigation suggested Mifsud operated in Russia’s interests, conservatives and conspiracy theorists have suggested he was instead aligned with Western intelligence agencies.

It’s unclear what Durham or Barr have come to suspect about Mifsud.

Barr met with British officials in London over the summer to discuss the Durham probe, said a U.S. official familiar with the matter, who spoke on the condition of anonymity because of the sensitive nature of the investigation. In those conversations, according to this official, Barr expressed a belief that the U.S. investigation of Russian interference in the 2016 election stemmed from some corrupt origin, the official said.

It was not clear what Barr thought was amiss, but he expressed a suspicion that information had been improperly gathered overseas about people connected with the Trump campaign, and that the British may have unwittingly assisted those efforts, the official said.

Another person familiar with Barr’s efforts denied that characterization, saying he has been seeking cooperation for Durham’s work, and not trying to promote a particular theory or accusation against U.S. agents and officers.

“It’s well known within the intelligence community that you cannot ask another government to do something that you’re prohibited from doing. That it is standard operating procedure,” said a former national security official, who spoke on the condition of anonymity because of the ongoing investigation.

An executive order governing U.S. intelligence activities states that no intelligence agency “shall participate in or request any person to undertake activities forbidden” by the order, which was issued in 1981.

As a young man, Barr worked as a lawyer at the CIA and has an ongoing interest in intelligence matters, according to those who know him well. In his public comments about the Russia interference investigation, he has suggested there were failures among former FBI leaders, and that intelligence agency rules about spying on Americans should be scrupulously followed regardless of party affiliation.

There are two primary efforts underway to scrutinize the 2016 investigation and its aftermath. Justice Department Inspector General Michael Horowitz is expected to issue in the coming weeks a lengthy report analyzing work done by the FBI and Justice Department to pursue alleged Russian election interference, and the applications for a Foreign Intelligence Surveillance Court order that approved electronic surveillance of the communications of Carter Page, a former Trump campaign adviser.

Separately, Durham is taking a broader look at the actions of intelligence agencies overseas and domestically. Durham has a long track record of being tasked with difficult investigations that involve the CIA or other intelligence agencies. His past investigations have often lasted years, so it’s unclear when Durham’s review might wrap up, but it is unlikely to be soon, according to people familiar with the matter.

Before Durham’s appointment, another U.S. attorney was tasked with reviewing the Clinton email investigation, but the results of that work are still unknown. The multiple investigations show just how much the political conflict of 2016 continues to be an obsession within the government.

Last week, The Washington Post reported that State Department security officials were re-examining aspects of the Clinton email investigation, in which State Department business was conducted on Hillary Clinton’s private server when she was secretary of state.