WASHINGTON — Speaker Nancy Pelosi announced on Tuesday that the House would initiate a formal impeachment inquiry against President Trump, charging him with betraying his oath of office and the nation’s security by seeking to enlist a foreign power to tarnish a rival for his own political gain.

Ms. Pelosi’s declaration, after months of reticence by Democrats who had feared the political consequences of impeaching a president many of them long ago concluded was unfit for office, was a stunning turn that set the stage for a history-making and exceedingly bitter confrontation between the Democrat-led House and a defiant president who has thumbed his nose at institutional norms.

“The actions taken to date by the president have seriously violated the Constitution,” Ms. Pelosi said in a brief speech invoking the nation’s founding principles. Mr. Trump, she added, “must be held accountable — no one is above the law.”

She said the president’s conduct revealed his “betrayal of his oath of office, betrayal of our national security and betrayal of the integrity of our elections.”

Ms. Pelosi’s decision to push forward with the most severe action that Congress can take against a sitting president could usher in a remarkable new chapter in American life, touching off a constitutional and political showdown with the potential to cleave an already divided nation, reshape Mr. Trump’s presidency and the country’s politics, and carry heavy risks both for him and for the Democrats who have decided to weigh his removal.

Though the outcome is uncertain, it also raised the possibility that Mr. Trump could become only the fourth president in American history to face impeachment. Presidents Andrew Johnson and Bill Clinton were both impeached but later acquitted by the Senate. President Richard M. Nixon resigned in the face of a looming House impeachment vote.

It was the first salvo in an escalating, high-stakes standoff between Ms. Pelosi, now fully engaged in an effort to build the most damning possible case against the president, and Mr. Trump, who angrily denounced Democrats’ impeachment inquiry even as he worked feverishly in private to head off the risk to his presidency.

Mr. Trump, who for months has dared Democrats to impeach him, issued a defiant response on Twitter while in New York for several days of international diplomacy at the United Nations, with a series of fuming posts that culminated with a simple phrase: “PRESIDENTIAL HARASSMENT!” Meanwhile, his re-election campaign and House Republican leaders launched a vociferous defense, accusing Democrats of a partisan rush to judgment.

“Such an important day at the United Nations, so much work and so much success, and the Democrats purposely had to ruin and demean it with more breaking news Witch Hunt garbage,” Mr. Trump wrote. “So bad for our Country!

For the past two years, talk of impeachment had centered around the findings of the special counsel, Robert S. Mueller III, who investigated Russia’s interference in the 2016 elections and Mr. Trump’s attempts to derail that inquiry. On Tuesday, Ms. Pelosi, Democrat of California, told her caucus and then the country that new revelations about Mr. Trump’s dealings with Ukraine, and his administration’s stonewalling of Congress about them, had finally left the House no choice but to proceed toward a rarely used remedy.

“Right now, we have to strike while the iron is hot,” she told House Democrats in a closed-door meeting in the basement of the Capitol. Emerging moments later to address a phalanx of news cameras, Ms. Pelosi, speaking sometimes haltingly as she delivered a speech from a teleprompter, invoked the Constitution and the nation’s founders as she declared, “The times have found us” and outlined a new stage of investigating Mr. Trump.

At issue are allegations that Mr. Trump pressured the president of Ukraine to open a corruption investigation of former Vice President Joseph R. Biden Jr., a leading contender for the 2020 Democratic presidential nomination, and his son. The conversation is said to be part of a whistle-blower complaint that the Trump administration has withheld from Congress. And it occurred just a few days after Mr. Trump had ordered his staff to freeze more than $391 million in aid to Ukraine.

Mr. Trump has confirmed aspects of his conversation with the Ukrainian leader in recent days, but he continues to insist he acted appropriately.

The president said on Tuesday that he would authorize the release of a transcript of the conversation, part of an effort to pre-empt Democrats’ impeachment push. But Democrats, after months of holding back, were unbowed, demanding the full whistle-blower complaint and other documentation about White House dealings with Ukraine, even as they pushed toward an expansive impeachment inquiry that could encompass unrelated charges.

Ms. Pelosi told fellow Democrats that Mr. Trump told her in a private call on Tuesday morning that he was not responsible for withholding the whistle-blower complaint from Congress. But late Tuesday, the White House and intelligence officials were working on a deal to allow the whistle-blower to speak to Congress and potentially even share a redacted version of the complaint in the coming days, after the whistle-blower expressed interest in talking to lawmakers.

Although Ms. Pelosi’s announcement was a crucial turning point, it left many unanswered questions about exactly when and how Democrats planned to push forward on impeachment.

House Democrats plan to bring up a resolution on Wednesday condemning Mr. Trump’s reported behavior toward Ukraine and the whistle-blower, and demanding his administration release the whistle-blower complaint — daring Republicans to vote against it.

And Ms. Pelosi said she had directed the chairmen of the six committees that have been investigating Mr. Trump to “proceed under that umbrella of impeachment inquiry.” In a closed-door meeting earlier in the day, she said the panels should put together their best cases on potentially impeachable offenses by the president and send them to the Judiciary Committee, according to two officials familiar with the conversation. That could potentially lay the groundwork for articles of impeachment based on the findings.

But whether Democrats would hold another House vote in the coming days to authorize their inquiry — as has been done in past presidential impeachments — remains to be seen. Republicans argue that without one, the House is not truly in an impeachment inquiry, no matter what Democrats say. Nor did the speaker lay out a timeline for the committees to do their work.

Some moderates who have taken on political risk to publicly support impeachment said privately that they were frustrated that Tuesday’s decisions did not clarify the process going forward, and urged Democratic leaders not to lose momentum. Representative Elissa Slotkin of Michigan, one of several first-term Democrats from Republican-leaning districts that Mr. Trump won in 2016, raised concerns on Tuesday during the closed-door meeting with her colleagues about a lack of clarity in the inquiry, asking who was in charge and what the focus would be, lawmakers in attendance said. Others cautioned that an impeachment process that could not win bipartisan support would never succeed.

The decision to begin a formal impeachment inquiry does not necessarily mean that the House will ultimately vote to charge Mr. Trump with high crimes and misdemeanors — much less that the Republican-controlled Senate will vote to remove him. But Ms. Pelosi and her leadership would not initiate the process unless they were prepared to reach that outcome.

And Mr. Trump’s allies mostly took it as a sign that a vote on articles of impeachment was inevitable.

Stephanie Grisham, the White House press secretary, warned that the Democrats’ move “destroyed any chances of legislative progress for the people of this country by continuing to focus all their energy on partisan political attacks.” Mr. Trump’s campaign manager, Brad Parscale, tried to turn the political spotlight onto Mr. Biden, as the campaign launched a new fund-raising plea for an “Official Impeachment Defense Task Force.”

“Democrats can’t beat President Trump on his policies or his stellar record of accomplishment, so they’re trying to turn a Joe Biden scandal into a Trump problem,” he wrote. “The misguided Democrat impeachment strategy is meant to appease their rabid, extreme, leftist base, but will only serve to embolden and energize President Trump’s supporters and create a landslide victory for the president.”

A smaller number of Republicans in the House and Senate reserved judgment, and signaled that they were interested in learning more facts about the Ukraine situation before denouncing the Democrats. Representative John Curtis, Republican of Utah, for example, said in a statement that he had the “utmost confidence in the investigative tools Congress has at its disposal” and would be “closely monitoring” the inquiry.

Ms. Pelosi’s announcement came amid a groundswell in favor of impeachment among Democrats that has intensified since late last week, with lawmakers from every corner of her caucus lining up in favor of using the House’s unique power to charge Mr. Trump if the allegations are proved true, or if his administration continues to stonewall attempts by Congress to investigate them. 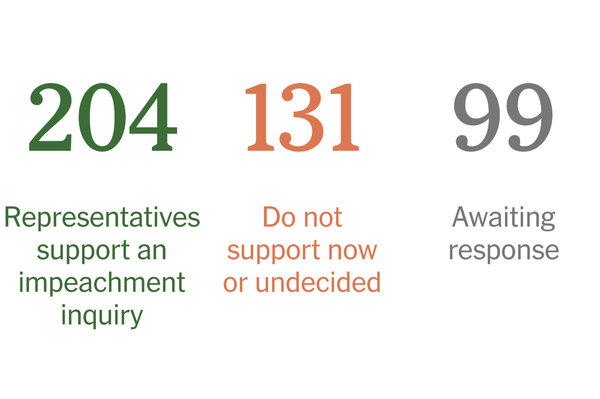 Complete List: Who Supports an Impeachment Inquiry Against Trump?

More than two-thirds of House Democrats and one Independent have said they now support impeachment proceedings.

The outpouring reached a crescendo just after noon, when Representative John Lewis of Georgia, the civil rights icon who for a generation has been regarded as the conscience of the House Democrats, dropped his resistance to impeachment and urged his colleagues to meet what he said was the call of history.

“I have been patient while we tried every other path and used every other tool,” Mr. Lewis thundered from the well of the House. “We will never find the truth unless we use the power given to the House of Representatives — and the House alone — to begin an official investigation as dictated by the Constitution.”

“The future of our democracy is at stake,” Mr. Lewis declared.

The House Judiciary Committee has been conducting its own impeachment investigation focused on Mr. Mueller’s findings, as well as allegations that Mr. Trump may be illegally profiting from spending by state and foreign governments and other matters. But that inquiry had not gotten the imprimatur of a full House vote or the full rhetorical backing of the speaker, as Democrats remained divided about the wisdom and political implications of impeaching a president without broader public support.

Now, after the revelation of a conversation between Mr. Trump and President Volodymyr Zelensky of Ukraine in which Mr. Trump pressed the foreign leader to investigate the Bidens, a cascading flood of Democrats had come out in favor of a formal impeachment proceeding.

The developments that have turned the tide began less than two weeks ago, when Representative Adam B. Schiff of California, the Intelligence Committee chairman, first revealed the existence of a secret whistle-blower complaint that the intelligence community’s internal watchdog had deemed “urgent” and credible but that the Trump administration had refused to share with Congress.

Democrats have given Joseph Maguire, the acting director of national intelligence, until Thursday to turn over the whistle-blower complaint or risk reprisal. And they have threatened to subpoena the Trump administration for a copy of the transcript of the president’s call with Mr. Zelensky and other relevant documents after Thursday if they are not shared voluntarily.

The temperature was considerably cooler in the Senate, where any charges against Mr. Trump would be weighed. Even lawmakers in the majority party were working to get to the bottom of the Ukraine situation.

When Senator Chuck Schumer of New York, the Democratic leader, offered a symbolic resolution calling for the whistle-blower complaint to be provided to both the House and Senate intelligence committees, not a single Republican objected. And the Senate Intelligence Committee was working on a bipartisan basis to demand explanations both from Mr. Maguire and the inspector general.