A meme poking at her performanceoutside a child detention camponly strengthens her campaign.

In June, Senator Kamala Harris of California visited a detention center for migrant children in Homestead, Fla. When officials at the facility refused to let her inside, she mounted a stepladder, binoculars in hand, to try to catch sight of the kids over the camp fence. Then she waved, touched a hand to her heart and gazed resolutely in their direction.

Twitter waved back. Other candidates were at the camp that day, stumping amid a throng of protesters, but it was Harris who left an impression. A three-second video of her wave was neatly sliced from its political context and served up online. It became an reaction GIF — a charm that could be stroked to produce endlessly personalized memes. The tweets detected a hint of faux sincerity in the wave, then magnified it by grafting it into pettier and pettier scenarios.

The comedian @DewaynePerkins wrote above the video: “Me waving goodbye to the stranger I unknowingly gave wrong directions to.”

The artist @ZoeGawd: “Grandmas on their porch still waving at y’all from 25 miles down the road.”

The photographer @ByDre: “When you tell your friends you gonna meet them at the next spot but know you are about to go home and get in bed.”

It was not the kind of reception that Harris had been seeking when she hit the trail. That moment outside the detention center was “heartbreaking,” she told BuzzFeed in a text exchange. “It was horrible.”

And yet the meme was not an altogether negative development for her campaign. The apparent contrivance of her performance, as drawn out by the meme, may have been unflattering, but the imagined scenes it was spliced into were harmless, even humanizing. As the meme spread, Harris’s image did, too, even if her message was left behind. “This isn’t a political tweet,” Dewayne Perkins clarified of his entry.1 It just starred a politician.

If we used to want our elected officials to represent our interests in government, now we also want them to represent us in new ways — to reflect our pop cultural sensibilities back at us; to make a facial expression in a video that we can relate to our own lives; to serve as a willing host for a round of internet jokes. A politician may hope that her image resonates positively with voters. But maybe it’s enough that her image resonates at all.

How the internet merged pop culture and politics.

A Twitter exchange about a rap-lite song reveals how pop-cultureaesthetics carry real values.

At an April town hall in Des Moines, Pete Buttigieg picked a song to represent how he thinks “we should come to politics”: Everlast’s “What It’s Like.”2

The song, which topped the mainstream rock chart in 1998, prescribes empathy in the face of various social ills: homelessness, teen pregnancy, drug addiction. It is also an acoustic rap-lite number full of stereotypical observations. “We’ve all seen a man at the liquor store beggin’ for your change,” Everlast sings. “The hair on his face is dirty, dreadlocked and full of mange.” He goes on: “God forbid you ever had to walk a mile in his shoes, ’cause then you really might know what it’s like to sing the blues.” 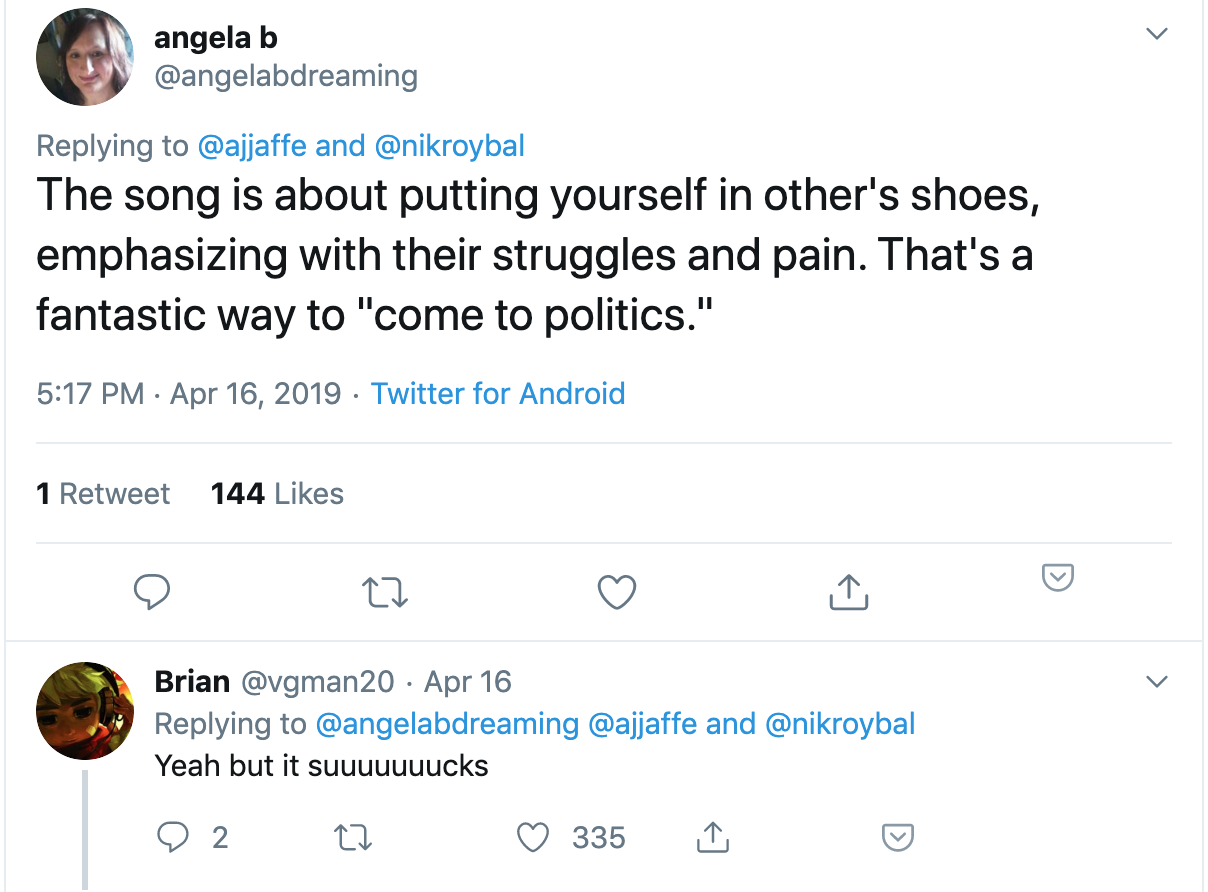 Do Buttigieg’s critics distrust him because they don’t like “What It’s Like”? Not exactly. But the song becomes an emblem of their distrust. Its sound is a musical transliteration of what they see as Buttigieg’s centrist vibe.

If Everlast — the former House of Pain frontman who got big with “Jump Around” — took rap music and transformed it into easy listening for white audiences, they see Buttigieg as taking progressive ideas and rendering them into technocratic, focus-grouped policy tweaks. “Progressive” is a political ideology but also a synonym for the artistic avant-garde. While a candidate like Beto O’Rourke labors to exploit that connotation by auspiciously aligning himself with punk, Buttigieg is unapologetically the adult contemporary candidate.

Bernie Sanders has a curious relationship to popular music. I suspect he doesn’t really listen to it. His iPad, he told Rolling Stone, is stocked with Beethoven’s symphonies. And yet his campaign has forged a strategic alliance with the pop music world that feels genuine.

In 2016, Sanders failed to name a favorite David Bowie song — “I know he passed away, and the answer is that I wasn’t much of a follower of his,” he said — but his campaign deployed “Starman” in a way that Newsweek called “inspirational” and “sincere.” His sit-down interviews with musicians — first with the rapper Killer Mike at a cafe and a barbershop, then with the rapper Cardi B at a nail salon — have been hits. The Cardi B footage, in which the senator and the star discuss Medicare, police brutality and the minimum wage, has reeled in tens of millions of views across social media.

His fans have helped enhance his musical persona, too. The “Bernie vs. Hillary” meme that defined the 2016 primary imbued him with cool-kid taste and an encyclopedic command of Radiohead’s catalog.3

There is an advantage to Sanders’ personal disengagement with music, and with pop culture more generally. Hillary Clinton courted celebrities with such a thirst that it seemed as if she might swallow them whole. She engaged so gamely with the surface delights of popular culture, she invited suspicion — that she was operating transactionally, using pop figures for the sheen of cool they could infuse into her campaign.

Sanders is using Cardi B’s celebrity, too, but his attitude toward that celebrity feels agnostic. In the video, he treats her not like a star but like a constituent. His very distance from pop culture allows him to create credible pop objects of his own.

In a meme campaign, ironic and sincere Williamson supporters unite against the haters.

What makes a candidatean online sensation?

What does it mean that Joe Biden, a front-runner for the Democratic nomination for president, has approximately zero online energy around his campaign — that he has, if such a thing is possible, negative online energy?

Search for Biden-related Facebook activity, and you’ll be confronted by groups dedicated to mocking the former vice president’s habit of sniffing the hair of women and girls. Throughout the Obama administration, The Onion delighted in memeing Biden, plugging him into the persona of a disarming old rascal, but this year, a former Onion editor, Joe Garden, publicly apologized for that coverage.4 Nobody is coming out on Twitter as a Biden stan.

Why? It’s partly because the Democratic electorate is older and less lefty than its Twitter delegation suggests. But there is also an inverse relationship between a campaign’s proximity to traditional power centers and the online buzz it inspires. And Biden is running on the most establishment platform possible: His pitch is that he should win because he could win.

When Biden was the vice president, a prominent but oddly toothless role, there was space to play around with his persona. It was cute to imagine him stripped down to a tank top on the White House lawn, polishing a Trans Am. But now that he is gunning for the presidency, his appeal as an online object of fascination has waned.

Garden said he regretted framing Biden in a way that made him seem “‘creepy but harmless,’ with the emphasis on ‘harmless.’” There is a paradox at the heart of presidential fandom: It views the most powerful person on the planet as also, somehow, the little guy. Candidates can embody that contradiction through their ideologies (if they are socialists or populists); their biographies (cue presidential hopefuls shaking their family trees until some humble welder falls out); or their attitudes (President Trump is literally mighty but acts figuratively small). No tension exists within Biden’s persona: It’s just power in pursuit of more.

Last month, when news broke that Ruth Bader Ginsburg, the 86-year-old Supreme Court justice, had received radiation therapy for a cancerous tumor, my brother’s former high school English teacher posted this on Facebook: “Today I changed my organ donor status so that now all of my organs go to Ruth Bader Ginsburg, even if I’m still alive.”

This is a familiar meme format on the left, where Ginsburg possesses an almost talismanic power. In the liberal imagination, she is styled as “Notorious R.B.G.,” cast as an action figure and used to market an improbable fitness plan.5 (“Notorious,” a nickname cribbed from the rapper the Notorious B.I.G., is of a trendy class of digital blackface that seeks to imbue professional white women with black male swagger.) Fans operate as if this tough-gal persona might ward off all-out Republican rule — maybe even death itself.

The gap between Ginsburg’s petite physicality and her judicial weight is stretched for a laugh, but there are graver power differentials at play. Ginsburg holds one of the most powerful jobs in the country, an unelected office that she will be forced to vacate only upon death, and yet the zealous cheerleading around her functions as if she is somehow underappreciated. The whole exercise feels oddly strained.

Maybe it’s because the fandom around Ginsburg arose just as she transformed into a writer of fiery dissents — in other words, as she started to lose. In her fandom, real judicial losses can be refashioned into rhetorical wins. Cultural victories act as Band-Aids for political wounds.

These days, everything is a content business, including the American presidency.

In some corners of theinternet, she’s still running.

In reality, Hillary Clinton is not a political force to be reckoned with. She lost the presidency to Donald Trump, and she promises she won’t try for a rematch. Instead she is performing color commentary from the sidelines of this election. She’s posting “Mean Girls” GIFs. She’s advising against nuking hurricanes. She’s tweeting at Lizzo.

But in the right-wing political imagination, Clinton looms over all the figures of the left. Her effigy burns brightly across conservative sectors of Facebook and Reddit. On the Facebook group Daily Trump Memes, she appears as a skeletal demon (a reference to John Carpenter’s “They Live,” perhaps, in which human elites are revealed to be corpselike aliens) and Homer Simpson in drag. Her emails remain an urgent topic of discussion. Clinton may not be running against President Trump, but these groups operate as if he is still running against her. Trump himself is still out on Twitter, relitigating the election he won. 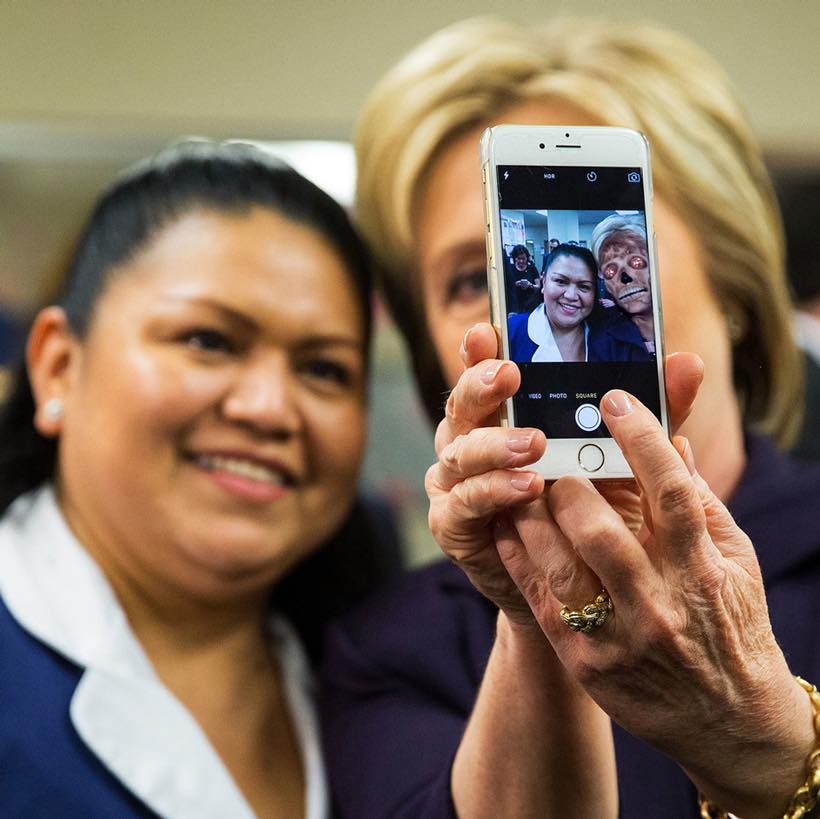 As influential as political fandoms can be, anti-fandoms — ones that define themselves around their zeal for delegitimizing a celebrity, be she Clinton or Taylor Swift — may be even more potent. (See also: the leftist mantra that “Kamala Harris is a cop,” and the right-wing repetition of “creepy Joe Biden.”) After all of the work that went into mounting an anti-fandom around Clinton — one with familiar story lines, insults and visual motifs — it’s more effective to keep investing in her demonization than it is to start fresh with a real Democratic candidate. A vote for Trump is still a vote against Clinton, whether she’s running or not.