Sixty-six million years ago, a giant meteor slammed into Earth off the coast of modern-day Mexico. Firestorms incinerated the landscape for miles around. Even creatures thousands of miles away were doomed on that fateful day, if not by fire and brimstone, then by mega-earthquakes and waves of unimaginable size.

Now, scientists have unearthed a remarkable trove of fossils that appear to date from the very day of the impact. The burial site consists of more than four feet of sediments and organic remains that were dumped in North Dakota almost instantly and transformed into rock over the eons. It evidently captures, in unparalleled detail, the repercussions of the giant doomsday rock that cleared the way for the evolution of mammals, including the primates known as humans.

In an article made available to reporters Friday in Proceedings of the National Academy of Sciences, a leading science journal, an international team of 12 scientists described a dig near Bowman, N.D., that encapsulated the swift demise of an ancient lake and its inhabitants.

When the meteor smashed into waters near what is now Mexico’s Yucatán Peninsula, it left a giant crater known as Chicxulub and prompted upheavals thousands of miles away, including what is now North Dakota. Within hours and perhaps minutes of the titanic collision, sea creatures were swept inland by tsunamis and earthquakes, tossed together and deposited with a diverse array of landlocked life, including trees, flowers and vanished types of freshwater fish.

Robert A. DePalma, a paleontologist at the Palm Beach Museum of Natural History and a graduate student at the University of Kansas. He has mined a fossil site in North Dakota secretly for years.Robert DePalma/University of Kansas

The jumble was swiftly entombed, and exquisitely preserved. Permeating the deposit were tiny spheres of clay and glass, known as tektites, which formed as molten rock, ejected by the impact, showered from the sky.

In the paper, the researchers argue that the fossil bed captures the Chicxulub impact’s immediate ramifications for life on Earth. It appears to be the best-ever snapshot of that day, one that advances the scientific understanding of “the full nature and extent of biotic disruptions that took place,” the authors write.

The lead researcher, Robert A. DePalma, is a curator of paleontology at the Palm Beach Museum of Natural History, in Florida, as well as a graduate student at the University of Kansas. Thirty-seven years old, he was granted access to the rich fossil bed by a rancher in 2012, then mined it secretly for years. His efforts are detailed in an article in The New Yorker that was posted online on Friday.

Gradually, Mr. DePalma shared his findings with top scientists, some of whom have now joined him as co-authors. They include Walter Alvarez, a geologist at the University of California, Berkeley, who pioneered the idea decades ago that the dinosaur extinction was the result of such a cosmic impact.

The rocks contained a tangle of fossilized trees, branches, fishes and other animals. “You would be blind to miss the carcasses sticking out” of the weathering rock, said Mr. DePalma in an interview. “It is impossible to miss when you see the outcrop.” 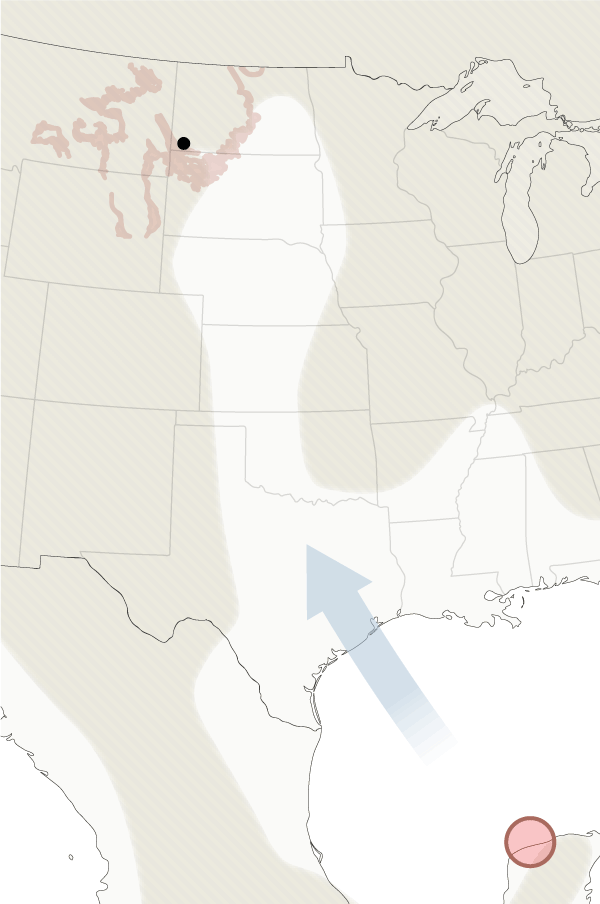 The paper describes how tektites, raining into the water, clogged the gills of fish, which were then killed by surges of water. The water could have traveled up from the Gulf of Mexico through an inland sea that cut through North America at the time. But the authors argue for another, more likely explanation: That cataclysmic waves from the impact — which produced the equivalent of a magnitude 10 or 11 earthquake — sloshed water out of distant lakes and seas and up their connected river channels.

“It basically agitates water like a washing machine,” said Phillip L. Manning, a paleontologist at the University of Manchester in England and one of the authors of the paper. “When that shock wave dissipates, it almost instantly drops out what was in this water body.”

Those contents, he said, formed the North Dakota deposit that he, Mr. DePalma and their colleagues described in their paper.

Mr. DePalma initially was disappointed with what he found, he said. He had hoped that the site would reveal rhythmic seasonal changes over a period of years. Instead, the material had been dumped in one big surge. “My idea of multi-season pond deposits was out the window,” he said.

In the deposit, the team discovered an ancient freshwater pond whose occupants had been quickly cemented together by waves of sediment and debris. The fossils include sturgeon and six-foot-long paddlefish, their scales intact but their bodies ripped and smashed; marine mollusks; leaves and tree fronds, and the burned trunks of trees. The fish carcasses were not bloated, decayed, or scavenged, suggesting that they were buried quickly — and that few animals were left alive after the cataclysm to come digging.

The fossil deposit also teems with tektites, tiny glass beads that are the telltale fallout of planetary-scale impacts. Fifty percent of the fossilized fish were found with tektites in their gills, as if the fish had inhaled the material. Also recovered were tektites trapped in amber. Their chemical composition was unchanged in 66 million years, and it closely matched the unique chemical signature of other tektites associated with the Chicxulub event.

The top layer of the fossil bed was found to be rich in iridium, a rare metal that Dr. Alvarez had originally identified at other sites as arising from the giant object that struck the Earth. Iridium, a precious metal belonging to the platinum group of elements, is more abundant in meteorites than in terrestrial rocks.

“Just the idea of fish with impact particles stuck in their gills from 66 million years ago, and trees with amber with impact particles, it’s so extraordinary that you do a double take for sure,” said Matthew Lamanna, a vertebrate paleontologist at the Carnegie Museum of Natural History in Pittsburgh, who was not involved with the research. “With the caveat that what they’re trying to show is really, really hard to show, I think they’ve done an excellent job of making that case.”

The Chicxulub impact and the global disaster it wrought are sometimes held up as the death stroke for the dinosaurs. But many scientists argue that an array of other factors, including volcanic eruptions and climatic disruptions, contributed to the demise of the giant reptiles.

The article in The New Yorker describes information about the discovery site that goes well beyond what is found in the scientific paper. Mr. DePalma is quoted as having also found the remains of many dinosaurs in the deposit, implying that the North Dakota site might turn out to be the world’s first to clearly associate the cosmic blow to the end of the dinosaur age.

Mr. DePalma unearthed “broken teeth and bones, including hatchling remains, of almost every dinosaur group,” according to the article, which was written by Douglas Preston. A dinosaur egg contained an embryo and other remains, which “suggested that dinosaurs and major reptiles were probably not staggering into extinction on that fateful day.”

In an interview, Steve Brusatte, a vertebrate paleontologist and evolutionary biologist at the University of Edinburgh, called The New Yorker portrayal of the fossil find “a remarkable story” that he wanted to believe. “But it’s disappointing that the dinosaurs are not mentioned in the peer-reviewed paper,” he said. “And because they’re not, there simply isn’t any evidence for me to assess.”

For now, Dr. Brusatte said, “I am left with more questions than answers when it comes to the dinosaur aspect of this story.”

Mr. DePalma said the purpose of this first paper was to establish the geology and timing of what happened on that catastrophic day. Subsequent papers will go into more detail about the residents, including dinosaurs, that died, he said: “It wasn’t a paper about dinosaurs. This was a basic overview of the site and how it was formed.”

William J. Broad is a science journalist and senior writer. He joined The Times in 1983, and has shared two Pulitzer Prizes with his colleagues, as well as an Emmy Award and a DuPont Award. @WilliamJBroad

Kenneth Chang has been at The Times since 2000, writing about physics, geology, chemistry, and the planets. Before becoming a science writer, he was a graduate student whose research involved the control of chaos. @kchangnyt

A version of this article appears in print on March 29, 2019, on Page A13 of the New York edition with the headline: Fossil Record of Day When Fire Balls Fell And Water Boiled Up. Order Reprints | Today’s Paper | Subscribe

We’ll bring you stories that capture the wonders of the human body, nature and the cosmos.