President Trump says he plans to withdraw from a nonproliferation treaty that I signed with Ronald Reagan. It’s just the latest victim in the militarization of world affairs.

Over 30 years ago, President Ronald Reagan and I signed in Washington the United States-Soviet Treaty on the elimination of intermediate- and shorter-range missiles. For the first time in history, two classes of nuclear weapons were to be eliminated and destroyed.

This was a first step. It was followed in 1991 by the Strategic Arms Reduction Treaty, which the Soviet Union signed with President George H.W. Bush, our agreement on radical cuts in tactical nuclear arms, and the New Start Treaty, signed by the presidents of Russia and the United States in 2010.

There are still too many nuclear weapons in the world, but the American and Russian arsenals are now a fraction of what they were during the Cold War. At the Nuclear Nonproliferation Review Conference in 2015, Russia and the United States reported to the international community that 85 percent of those arsenals had been decommissioned and, for the most part, destroyed.

Today, this tremendous accomplishment, of which our two nations can be rightfully proud, is in jeopardy. President Trump announced last week the United States’ plan to withdraw from the Intermediate-range Nuclear Forces Treaty and his country’s intention to build up nuclear arms.

I am being asked whether I feel bitter watching the demise of what I worked so hard to achieve. But this is not a personal matter. Much more is at stake.

A new arms race has been announced. The I.N.F. Treaty is not the first victim of the militarization of world affairs. In 2002, the United States withdrew from the Antiballistic Missile Treaty; this year, from the Iran nuclear deal. Military expenditures have soared to astronomical levels and keep rising.

As a pretext for the withdrawal from the I.N.F. Treaty, the United States invoked Russia’s alleged violations of some of the treaty’s provisions. Russia has raised similar concerns regarding American compliance, at the same time proposing to discuss the issues at the negotiating table to find a mutually acceptable solution. But over the past few years, the United States has been avoiding such discussion. I think it is now clear why.

With enough political will, any problems of compliance with the existing treaties could be resolved. But as we have seen during the past two years, the president of the United States has a very different purpose in mind. It is to release the United States from any obligations, any constraints, and not just regarding nuclear missiles.

The United States has in effect taken the initiative in destroying the entire system of international treaties and accords that served as the underlying foundation for peace and security following World War II.

Yet I am convinced that those who hope to benefit from a global free-for-all are deeply mistaken. There will be no winner in a “war of all against all” — particularly if it ends in a nuclear war. And that is a possibility that cannot be ruled out. An unrelenting arms race, international tensions, hostility and universal mistrust will only increase the risk.

George Shultz: We Must Preserve This Nuclear Treaty

This is the time to expand, not abandon, an important nuclear weapons agreement with Russia. 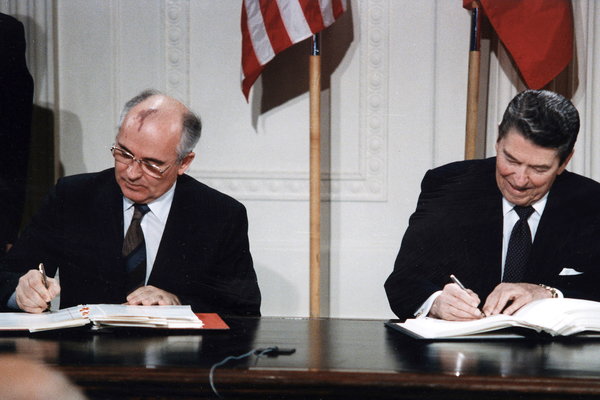 Is it too late to return to dialogue and negotiations? I don’t want to lose hope. I hope that Russia will take a firm but balanced stand. I hope that America’s allies will, upon sober reflection, refuse to be launchpads for new American missiles. I hope the United Nations, and particularly members of its Security Council, vested by the United Nations Charter with primary responsibility for maintaining international peace and security, will take responsible action.

Faced with this dire threat to peace, we are not helpless. We must not resign, we must not surrender.

Mikhail Gorbachev is the former president of the Soviet Union. This article was translated by Pavel Palazhchenko from the Russian.