Opinion | If I Win My District, I’ll Get Rid of It – The New York Times
https://www.nytimes.com/2018/10/24/opinion/if-i-win-my-district-ill-get-rid-of-it.html?action=click&module=Opinion&pgtype=Homepage

I am working hard to win the race for the 101st Assembly District in New York — and if I succeed, I will work just as hard to get rid of it. The 101st is a monstrosity of gerrymandering that disenfranchises voters and weakens representative democracy in upstate New York.

I have to start every conversation on the campaign trail with a show-and-tell session featuring a map of our district. Invariably, residents of both parties shake their heads at the absurdity of it. 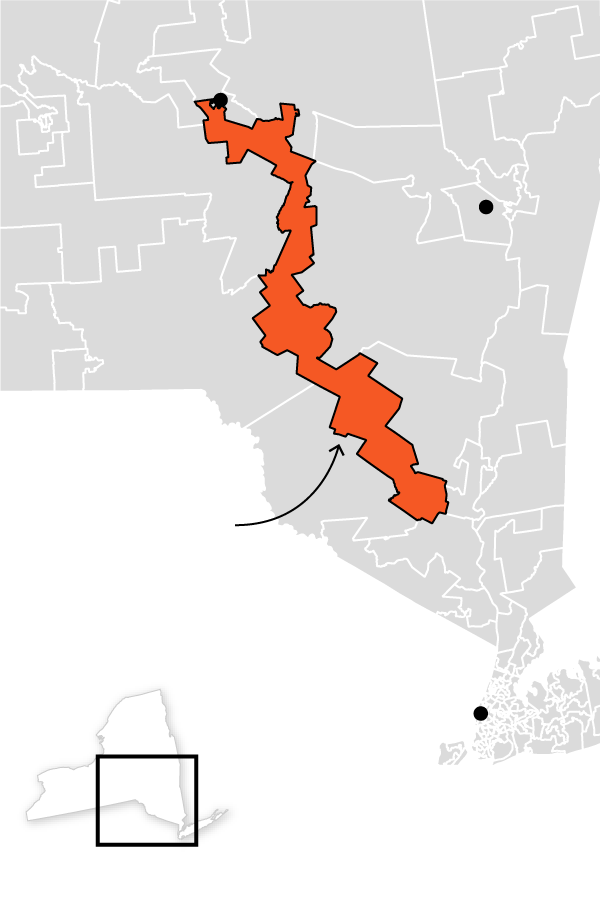 The district comprises 25 mostly rural townships carved out of seven counties in a narrow north-south line rarely more than a single town wide. It runs about 200 miles, from the Mohawk Valley through the Southern Tier and into the Hudson Valley. It spans three congressional districts, four State Senate districts and 36 school districts.

The northern tip includes the suburbs of Utica, while the southern end dips into Orange County to encompass a couple of New York City commuter towns. This last fact never fails to blow the minds of my neighbors in the 850-person dairy farming town of Westford, for whom New York City might as well be on another planet.

How can anyone properly represent a district so incoherently drawn? It simply makes no sense geographically, economically or culturally; the people in the northern part scarcely speak the same dialect of English as those in the south, let alone face the same policy issues.

Take just one concern: water. The suburban areas of New Hartford, near Utica, have complex issues regarding storm water drainage and flooding, while decades of underinvestment in infrastructure has left the residents of the village of Ilion, in nearby Herkimer County, with brown municipal water flowing from their faucets. The town of Delhi and the surrounding areas in Delaware County, in the middle of the district, fret about the stifling economic effects of being ringed by New York City-owned watershed land, while in my town, one hour north, every household has its own well water and septic tank, and no municipal water services are available at all.

Drafting a districtwide water policy, or even a coherent articulation of our needs, would be nearly impossible. Similar regional complexities are to be found with any issue one might want to consider as a legislator tasked with representing this district.

The 101st was drawn in 2012, so the story goes, by Republicans to punish one of their own caucus members yet remain a safe Republican seat. In other words, its design is actively antidemocratic. (Broadly speaking, anything that artificially makes a district less competitive makes it less democratic.)

Ideally, an incumbent should be able to protect his or her seat only by being an effective and successful representative. A district such as ours, which is intentionally packed with members of one party, necessarily reduces the degree to which citizens of all parties are represented. When politicians pick their voters, they often no longer feel compelled to work hard in order to provide quality constituent services and thoughtful leadership.

Counties are the natural unit of governance in rural upstate New York, and by slicing them up we weaken their ability to provide coherent stewardship. Consider the travails of the Soil and Water Department in Otsego County. In order to stitch together the resources needed for a countywide stream remediation plan, it must appeal to the good graces of four different Assembly members and a state senator.

Or consider the plight of the ironically named town of Neversink, already drowned once to create a water reservoir for New York City and now the only town from Sullivan County to be politically isolated into the 101st. Also problematic is the village of Ellenville with a large bilingual and minority population, whose current representative in Albany lives three and a half hours away by car in the suburbs of an entirely different urban area.

The consequences of districts being drawn like ours are more than theoretical. All across upstate New York, people of all political persuasions are ignored and underserved by a political system that feels dominated by the big city. Anything that adds to the frustration and confusion of voters reduces turnout and increases disillusionment with government in general. Incoherent districts drawn by our incumbents further fracture the political power of rural and small-town New Yorkers.

The process weakens both the ability and the resolve of our elected officials to argue for the resources and attention we need to solve our specific regional issues, including finding ways to balance the economy with the environment, repairing our decaying physical infrastructure, the paucity of rural access to good health care, collapsing dairy prices, Stone Age internet and cellphone coverage, endemic rural poverty and an epidemic of opioid addiction.

As a candidate working tirelessly to win over an electorate intentionally constructed to stack the odds against me while unequivocally opposed to the disenfranchising practice of gerrymandering, I’m in an awkward position. Even as I make an earnest and passionate appeal to the far-flung voters of our district that, given the current circumstances, I would be their best and truest representative, I also promise that, if they elect me, I will seek to redraw our district at the next opportunity. It is a change that, if successful, will mean that I am in effect arguing to no longer represent some of the very people who voted for me.

But it’s the only real choice. The best way to represent the people of my district is to not represent them in the future, to allow them to choose representatives more in line with their political cohort. If being a good representative means eliminating the very district that elected me, then so be it.

Chad McEvoy is a Democratic candidate for the 101st New York Assembly District.