Confidential documents reviewed by The Times indicate that Jared Kushner, President Trump’s son-in-law and adviser, probably paid little or no income tax from 2009 to 2016.

Over the past decade, Jared Kushner’s family company has spent billions of dollars buying real estate. His personal stock investments have soared. His net worth has quintupled to almost $324 million.

And yet, for several years running, Mr. Kushner — President Trump’s son-in-law and a senior White House adviser — appears to have paid almost no federal income taxes, according to confidential financial documents reviewed by The New York Times.

His low tax bills are the result of a common tax-minimizing maneuver that, year after year, generated millions of dollars in losses for Mr. Kushner, according to the documents. But the losses were only on paper — Mr. Kushner and his company did not appear to actually lose any money. The losses were driven by depreciation, a tax benefit that lets real estate investors deduct a portion of the cost of their buildings from their taxable income every year.

In 2015, for example, Mr. Kushner took home $1.7 million in salary and investment gains. But those earnings were swamped by $8.3 million of losses, largely because of “significant depreciation” that Mr. Kushner and his company took on their real estate, according to the documents reviewed by The Times.

Nothing in the documents suggests Mr. Kushner or his company broke the law. A spokesman for Mr. Kushner’s lawyer said that Mr. Kushner “paid all taxes due.”

In theory, the depreciation provision is supposed to shield real estate developers from having their investments whittled away by wear and tear on their buildings.

In practice, though, the allowance often represents a lucrative giveaway to developers like Mr. Trump and Mr. Kushner.

A Step-by-Step Explanation of How It Worked 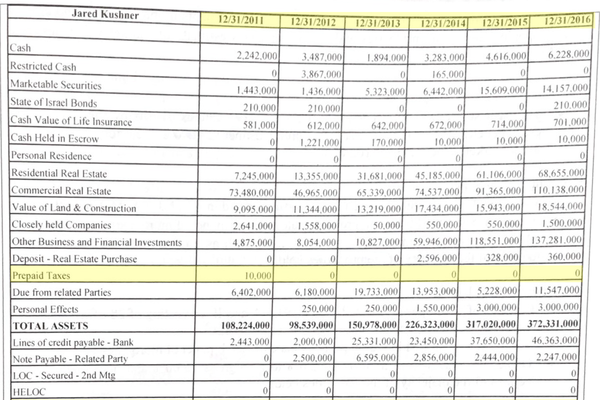 The law assumes that buildings’ values decline every year when, in reality, they often gain value. Its enormous flexibility allows real estate investors to determine their own tax bills.

The White House last year championed a sweeping revision of the nation’s tax laws that expanded many of the benefits enjoyed by real estate investors, allowing them to reap even larger deductions.

“The Trump administration was in a position to clean up the tax code and promised to get rid of some of the complexity that certain taxpayers use to their advantage,” said Victor Fleischer, a tax law professor at the University of California, Irvine. “Instead, they doubled down on those provisions, particularly the ones they have familiarity with to benefit themselves.”

The documents, which The Times reviewed in their entirety, were created with Mr. Kushner’s cooperation as part of a review of his finances by an institution that was considering lending him money. Totaling more than 40 pages, they describe his business dealings, earnings, expenses and borrowing from 2009 to 2016. They contain information that was taken from Mr. Kushner’s federal tax filings, as well as other data provided by his advisers. The documents, mostly created last year, were shared with The Times by a person who has had financial dealings with Mr. Kushner and his family.

Thirteen tax accountants and lawyers, including J. Richard Harvey Jr., a tax official in the Reagan, George W. Bush and Obama administrations, reviewed the documents for The Times. Mr. Harvey said that, assuming the documents accurately reflect information from his tax returns, Mr. Kushner appeared to have paid little or no federal income taxes during at least five of the past eight years. The other experts agreed and said Mr. Kushner probably didn’t pay much in the three other years, either.

Peter Mirijanian, a spokesman for Mr. Kushner’s lawyer, Abbe Lowell, said he would not respond to assumptions derived from documents that provide an incomplete picture and were “obtained in violation of the law and standard business confidentiality agreements. However, always following the advice of numerous attorneys and accountants, Mr. Kushner properly filed and paid all taxes due under the law and regulations.”

Mr. Mirijanian added that, with regard to the tax legislation, Mr. Kushner “has avoided work that would pose any conflict of interest.”

The revelation about Mr. Kushner’s minimal tax payments comes as his father-in-law’s taxes are under renewed scrutiny. A Times investigation published this month found that Mr. Trump participated in outright fraud that shielded his family’s fortune from estate and gift taxes.

Mr. Trump has broken with decades of tradition by refusing to release his tax returns. But portions of a 1995 tax return previously published by The Times show trends similar to the one visible in the documents detailing Mr. Kushner’s finances. Mr. Trump at the time reported nearly $916 million in losses, which could have permitted him to avoid any federal income taxes for almost two decades.

The summaries of Mr. Kushner’s tax returns reviewed by The Times don’t explicitly state how much he paid. Instead, the documents include disclosures by his accountants that estimate how much tax he owed for the year just ended — called “income taxes payable” — and how much he paid during the year in anticipation of taxes he would owe, called “prepaid taxes.” For most of the years covered, both were listed as zero.

Peter Buell, who runs tax services for the real estate practice of the accounting firm Marcum, said the lack of prepayments indicated Mr. Kushner most likely didn’t owe income taxes in those years. Mr. Buell said he was especially confident that Mr. Kushner had no tax liability because the documents also report no “income taxes payable.”

Kushner Companies — where Mr. Kushner was chief executive and remains an owner — has been profitable and has thrown off millions of dollars in cash annually for Mr. Kushner and his father, Charles, according to an analysis by the company that was included in the documents reviewed by The Times.

But as far as the Internal Revenue Service is concerned, the Kushners have been losing money for years.

Kushner Companies, like many real estate firms, passes on any tax obligations to its owners, including Mr. Kushner and his father, who incorporate them into their personal tax returns.

Unlike typical wage earners, the owners of such companies can report losses for tax purposes. When a firm like Kushner Companies reports expenses in excess of its income, the result is a “net operating loss.” That loss can wipe out any taxes that the company’s owner otherwise would owe. Depending on the size of the loss, it can even be used to get refunds for taxes paid in prior years or eliminate tax bills in future years.

Mr. Kushner’s losses, stemming in large part from the depreciation deduction, appeared to wipe out his taxable income in most years covered by the documents.

He is reporting the losses even though he bought his properties with borrowed funds. In many cases, Mr. Kushner kicked in less than 1 percent of the purchase price, according to the documents. Even that small amount generally was paid for with loans. Mr. Kushner’s credit lines from banks rose to $46 million in 2016 from zero in 2009, the documents show.

The result: Mr. Kushner is getting tax-reducing losses for spending someone else’s money, which is permitted under the tax code. Depreciation deductions are available in other industries, but they generally don’t get to take losses related to spending with borrowed money.

“If I had to live my life over again, I would have been in the real estate business,” said Jonathan Blattmachr, a well-known trusts and estates lawyer, now a principal at Pioneer Wealth Partners, who reviewed the Kushner documents. “It’s fantastic. You get tax deductions for things you don’t pay for.”

More on Taxes in the Trump Administration

The president has long sold himself as a self-made billionaire, but a Times investigation found that he received at least $413 million in today’s dollars from his father’s real estate empire, much of it through tax dodges in the 1990s. 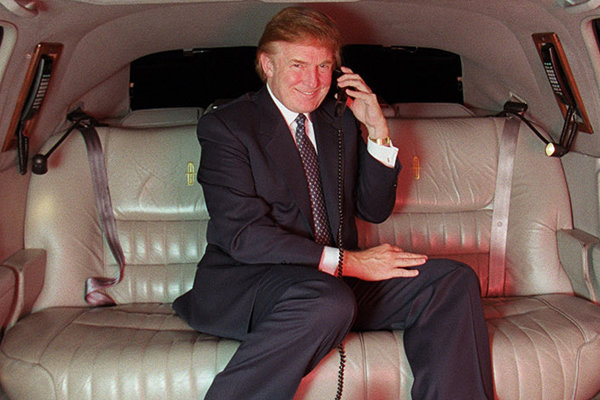 One of the only years in which Mr. Kushner appeared to have owed anything was 2013, when he reported income taxes payable of $1.1 million. According to the documents, Mr. Kushner has filed tax returns separately from his wife, Ivanka Trump — a relatively common practice among wealthy couples who want to avoid entwining their complex personal finances.

Mr. Kushner’s father appears to have benefited from the same tax deductions, the documents indicate. The experts interviewed by The Times said Charles Kushner most likely avoided paying federal income taxes from at least 2012 to 2016.

The tax code affords real estate investors great leeway in how they calculate their depreciation — flexibility that often is used to inflate their annual deductions. Among the tactics used by many developers: Their tax advisers prepare studies arguing that much of a property’s value is attributable to things like appliances and parking lots, which under the law can be depreciated more quickly than the building.

Developers might have to pay capital gains taxes if they sell their properties. But the Kushners, like others in the real estate business, often avoid that tax, too, by using the proceeds of sales to buy more properties within a certain time window.

At least in part because of that perk, the Kushners’ property sales in the period covered by the documents — totaling about $2.3 billion, according to Real Capital Analytics, a research firm — generated little or no taxable income for Mr. Kushner.

Last year’s tax legislation eliminated that benefit for all industries but one: real estate.