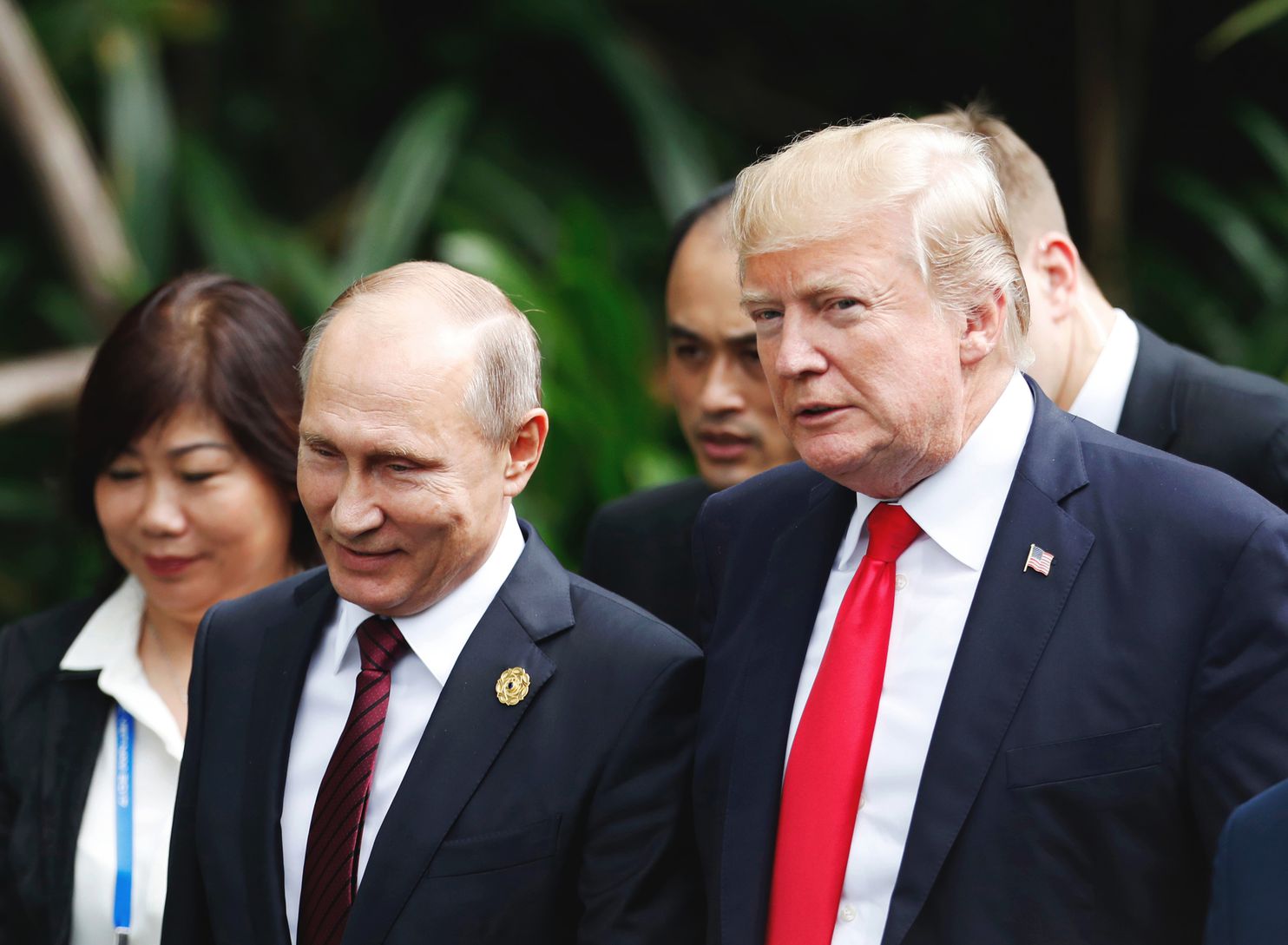 The Democratic National Committee filed a multimillion-dollar lawsuit Friday against the Russian government, the Trump campaign and the WikiLeaks organization alleging a far-reaching conspiracy to disrupt the 2016 campaign and tilt the election to Donald Trump.

The complaint, filed in federal district court in Manhattan, alleges that top Trump campaign officials conspired with the Russian government and its military spy agency to hurt Democratic presidential nominee Hillary Clinton and help Trump by hacking the computer networks of the Democratic Party and disseminating stolen material found there.

“During the 2016 presidential campaign, Russia launched an all-out assault on our democracy, and it found a willing and active partner in Donald Trump’s campaign,” DNC Chairman Tom Perez said in a statement.

“This constituted an act of unprecedented treachery: the campaign of a nominee for President of the United States in league with a hostile foreign power to bolster its own chance to win the presidency,” he said.

The case asserts that the Russian hacking campaign — combined with Trump associates’ contacts with Russia and the campaign’s public cheerleading of the hacks — amounted to an illegal conspiracy to interfere in the election that caused serious damage to the Democratic Party.

[Read the DNC lawsuit against Russia and the Trump campaign]

Trump says allegations of collusion are a ’hoax’

President Trump on April 18 dismissed allegations that his campaign colluded with Russia in the 2016 presidential election. (The Washington Post)

Senate investigators and prosecutors for special counsel Robert S. Mueller III are still investigating whether Trump associates coordinated with the Russian efforts. Last month, House Intelligence Committee Republicans said they found no evidence that President Trump and his affiliates colluded with Russian officials to sway the election or that the Kremlin sought to help him — a conclusion rejected by the panel’s Democrats.

The president has repeatedly rejected any collusion or improper activity by his campaign. This week, he referred again in a tweet to the “phony Russia investigation where, by the way, there was NO COLLUSION (except by the Dems).”

Suing a foreign country may present legal challenges for the Democrats, in part because other nations have immunity from most U.S. lawsuits. The DNC’s complaint argues Russia is not entitled to the protection because the hack constituted a trespass on the party’s private property.

The lawsuit argues that Russia is not entitled to sovereign immunity in this case because “the DNC claims arise out of Russia’s trespass on to the DNC’s private servers . . . in order to steal trade secrets and commit economic espionage.”

The lawsuit echoes a similar legal tactic that the Democratic Party used during the Watergate scandal. In 1972, the DNC filed suit against then-President Richard Nixon’s reelection committee seeking $1 million in damages for the break-in at Democratic headquarters in the Watergate building.

Bob Woodward explains why taped evidence was key in Watergate

The suit was denounced at the time by Nixon’s attorney general, John Mitchell, who called it a case of “sheer demagoguery” by the DNC. But the civil action brought by the DNC’s then-chairman, Lawrence F. O’Brien, was ultimately successful, yielding a $750,000 settlement from the Nixon campaign that was reached on the day in 1974 that Nixon left office.

The suit filed Friday seeks millions of dollars in compensation to offset damage it claims the party suffered from the hacks. The DNC argues that the cyberattack undermined its ability to communicate with voters, collect donations and operate effectively as its employees faced personal harassment and, in some cases, death threats.

The suit also seeks an acknowledgment from the defendants that they conspired to infiltrate the Democrats’ computers, steal information and disseminate it to influence the election.

To support its case, the lawsuit offers a detailed narrative of the DNC hacks, as well as episodes in which key Trump aides are alleged to have been told Russia held damaging information about Clinton.

Russia engaged in a “brazen attack on U.S. soil” the party alleges, a campaign that began with the cyberhack of its computer networks in 2015 and 2016. Trump campaign officials received repeated outreach from Russia, the suit says.

“Rather than report these repeated messages and communications that Russia intended to interfere in the U.S. election, the Trump campaign and its agents gleefully welcomed Russia’s help,” the party argues

The suit does not name Trump as a defendant. Instead, it targets various Trump aides who met with people believed to be affiliated with Russia during the campaign, including the president’s son, Donald Trump Jr., his son-in-law Jared Kushner, his campaign chairman Paul Manafort and Manafort’s deputy, Rick Gates.

Manafort and Gates were charged with money-laundering, fraud and tax evasion in a case brought by special prosecutors last year. In February, Gates pleaded guilty to conspiracy and lying to the FBI and is cooperating with investigators. Manafort has pleaded not guilty.

The DNC lawsuit also names as a defendant the Russian military intelligence service, the GRU, which has been accused by the U.S. government of orchestrating the hacks, as well as WikiLeaks, which published the DNC’s stolen emails, and the group’s founder Julian Assange.

The White House, the Russian Embassy, WikiLeaks and Assange had no immediate comment on Friday. A Manafort spokesman declined comment.

The lawsuit was also filed against Roger Stone, the longtime Trump confidante who claimed during the campaign that he was in contact with Assange.

The Trump advisers and associates have denied assisting Russia in its hacking campaign. Stone has denied any communication with Assange or advance knowledge of the document dumps by WikiLeaks, saying his comments about Assange were jokes or exaggerations.

The DNC lawsuit argues that the Russian government and the GRU violated a series of laws by orchestrating the secret intrusion into the Democrats’ computer systems, including statutes to protect trade secrets, prohibit wire tapping and prevent trespassing.

The party said the Trump defendants committed conspiracy through their interaction with Russian agents and their public encouragement of the hacking, with the campaign itself acting as a racketeering enterprise promoting illegal activity.

The complaint was filed on behalf of the party by the law firm of Cohen Milstein.

The suit contains previously undisclosed details, including that the specific date when it is believed theRussians breached the DNC computer system: July 27, 2015, according to forensic evidence cited in the filing.

The analysis shows the system was breached again on April 18, 2016. The first signs that hackers were siphoning documents and information from DNC systems on April 22. The suit notes that four days later, Trump foreign policy adviser George Papadopoulos was informed by Josef Mifsud, a London-based professor, that the Russians were in possession of thousands of emails that could be damaging to Clinton.

The list of defendants in the suit includes Papadopoulos and Mifsud, as well as Aras and Emin Agalarov, the wealthy Russian father and son who hosted the Miss Universe Pageant in Moscow in 2013. Trump, who owned the pageant, attended the event.

The Agalarovs also played a role in arranging a meeting for a Russian lawyer at Trump Tower in New York in 2016, at which Donald Trump Jr. had expected to be given damaging information about Clinton.

Scott Balber, an attorney for the Agalarovs, said the allegations about his clients were “frivolous” and “a publicity stunt.”

“They had absolutely nothing to do with any alleged hacking of any Democratic computer system or any interference in the US election.”

The suit alleges that Trump’s personal and professional ties to Russia helped foster the conspiracy.

The DNC’s lawyers wrote that “long standing personal professional and financial ties to Russia and numerous individuals linked to the Russian government provided fertile ground for a conspiracy between the defendants to interfere in the 2016 elections.”

The lawsuit describes how the then-Soviet Union paid for Trump to travel Moscow in the 1980s.

It also details the history of Manafort and Gates, who worked for Russian-friendly factions in the Ukraine before joining the Trump campaign. Prosecutors have said they were in contact in 2016 with Konstantin Kilimnik, a former linguist in the Russian army who the FBI has alleged had ties to Russian intelligence.

Alice Crites contributed to this report.