No one seems to know if Trump has a ‘red line’ for war with North Korea – CNNPolitics
http://www.cnn.com/2017/12/08/politics/north-korea-trump-dangerous-choice/index.html 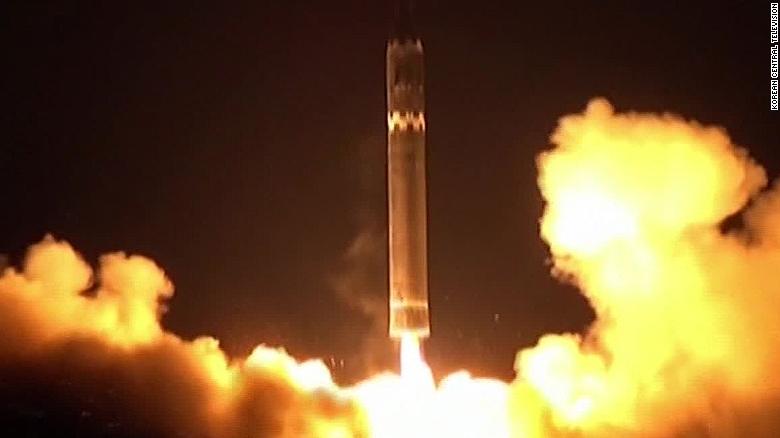 Washington (CNN)Only President Donald Trump and his closest advisers may truly know how close the US is to war with North Korea as the administration’s standoff with Pyongyang continues to escalate.

Trump’s National Security Adviser H.R. McMaster said last week that the threat of war with North Korea is “increasing every day” — a stark warning that is raising new questions about whether the administration has a predetermined “red line” for military action after the rogue regime’s latest — and most successful — intercontinental ballistic missile test to date.
While Trump has been eager to confront North Korean leader Kim Jong Un both verbally and via Twitter, his threats of “fire and fury” have largely been tempered by assurances from top advisers who insist the US remains committed to prioritizing a peaceful resolution to tensions with Pyongyang. 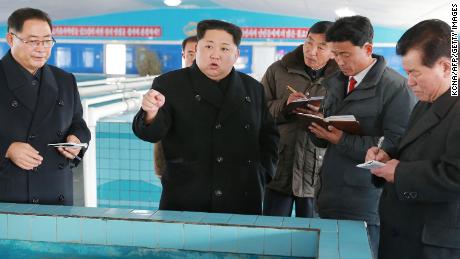 But Trump’s provocative rhetoric and suggestions of considering a “preventative war” have raised concerns that he may be more willing to engage in a conflict on the Korean peninsula than past presidents.

One former senior defense official told CNN that Trump could ultimately decide on his own whether or not the US makes the first move.

“The only reason we will have war is if President Trump wants war,” the source said. “He is the wild card in this … he can order us to start a war via a preemptive strike.”

Most of Trump’s top national security advisers have said that military options should be reserved pending an imminent threat to the US or allies, but McMaster has repeatedly suggested otherwise — even hinting that conflict is a real possibility and one that could come soon.

In addition to his comments last week, McMaster has previously ruled out any diplomatic scenario short of denuclearization — a demand that Pyongyang has consistently said it will not meet.

“Accept and deter is unacceptable. So this puts us in a situation where we are in a race to resolve this, short of military action,” he said last month, adding the President has made it clear “he is not going to accept this regime threatening the United States with a nuclear weapon.”

McMaster’s rhetoric could indicate that he views the threat of a military option as a viable tool to forcibly denuclearize North Korea — making him a part of, what one expert called, the administration’s “talking is futile” camp.

A strategy pursuing forcible denuclearization does not necessarily indicate support for preemptive military action but could use provocative rhetoric in an attempt to bait Kim into a miscalculation or a scenario in which North Korea initiates a US response, according to Vipin Narang, an associate professor of political science at MIT and a member of MIT’s Security Studies Program.

A spokesman for North Korea’s foreign ministry said Wednesday that Pyongyang does not want war, but if a conflict should occur, it will be initiated by the US.

“Should the US miscalculate our patience and light the fuse for a nuclear war, we will surely make the US dearly pay the consequences” an unnamed spokesman said, according to the state run Korean Central News Agency (KCNA).

Both sides have avoided a severe miscalculation to date, but the situation has evolved dramatically in recent weeks.

“I think we’re really running out of time,” he said.

While Graham believes time is running out for the US to prevent Pyongyang from developing that capability, some say the clock has already hit zero.

North Korea has long maintained it wants nuclear weapons and long-range missiles to deter the United States from attempting to overthrow the regime of Kim Jong Un.

Pyongyang looks at states such as Iraq — where Saddam Hussein was overthrown by the United States — and Libya — its late leader, Moammar Gadhafi, gave up his nuclear ambitions for sanctions relief and aid, only to be toppled and killed after the United States intervened in his country’s civil unrest — and believes that only being able to threaten the US mainland with a retaliatory nuclear strike can stop American military intervention.

Many experts say they believe North Korea would not use the weapons first. Kim values his regime’s survival above all else and knows the use of a nuclear weapon would start a war he could not win, analysts say.

“A North Korean missile with a nuclear payload capable of striking an American city is no longer a distant hypothetical, but an imminent danger — one that poses a real and rising risk of conflict,” according to Sen. John McCain, chairman of the Senate Armed Services Committee.

While the situation with North Korea demands urgency, the former defense official told CNN that the rhetoric used by both McMaster and Graham is “damn scary” and potentially dangerous.

“I’m surprised people are talking so openly about starting a war with a nuclear power,” the former official said, noting that Kim is “reckless but not irrational” and is pursuing long range nuclear weapons for deterrence — a conclusion that is also shared by the CIA.

The Trump administration publicly insists that its “all-options-on-the-table” strategy has not changed, but McMaster seemed to undermine the effectiveness of that very policy when he warned that the risk of war increases by the day.

North Korea continues to demonstrate unprecedented success in its nuclear weapon development despite a US-led “maximum pressure campaign” utilizing a combination of sanctions, threats of military force and diplomatic isolation.

While diplomatic channels of communication remain open, neither side has indicated it is willing to concede an inch showing that — at least for the moment — the prospect of serious negotiations remains unlikely.

Conflicting views on a red line?

The administration has avoided drawing a “red line” when it comes to the use of military force and specific details related to circumstances that might prompt such a response have been kept secret for strategic purposes, according to officials.

Publicly, the US remains committed to pursuing “a peaceful path to denuclearization and to ending belligerent actions by North Korea,” according to Aaron Tarver, a State Department spokesperson, but the situation is complicated by the administration’s murky position on whether the successful development of a nuclear weapon capable of hitting the US could justify a military response.

“The White House hasn’t been entirely precise about what they mean by a North Korean capability to strike the United States or what specifically would trigger action,” according to Kingston Reif, director for disarmament and threat reduction policy at the Arms Control Association.

“The risks associated with drawing such a red line are considerable. It creates a “commitment trap,” or significant pressure to carry out a threat lest a bluff be called,” Reif said, adding that “North Korea’s possession of the capability to range the United States with a nuke-armed ICBM does not constitute an imminent threat.”

But indications of an internal split within the administration may highlight an emerging ideological conflict within Trump’s national security team, according to Narang.

Two distinct groups with differing views on the role of military force have begun to emerge within Trump’s inner circle, he said, a split that could put McMaster and Mattis on opposite sides of the debate in the near future.

Both Mattis and Tillerson have consistently said they prefer a diplomatic resolution to the situation and see the threat of military action as one of several coercive tools they hope can ultimately help bring Kim to the negotiating table.

But for those threats to have the desired effect, Mattis and Tillerson believe the US must continue to “amp up” its military strength as a viable option, Narang said.

The former defense official who is familiar with Mattis’ way of thinking also noted that it is unlikely that he would push for preventative war or a military option unless the US was truly out of diplomatic options.

But the recent comments from McMaster and Graham have sparked fresh fears over the fact that Trump could unilaterally initiate a large-scale conflict if the administration supports a decision to preemptively attack North Korea.

“I can’t speak to what is exactly in McMaster’s (or Trump’s) head. But his rhetoric clearly suggests that the White House believes preventative war to stop North Korea from further perfecting its capability to strike the US homeland is a real, live option,” Reif told CNN. “Preventative war is not a viable, rational, or constitutional (in the absence of approval from Congress) option.”

Congressional lawmakers — including Graham — have also refrained from clearly defining a “red line” for military action, but officials on both sides of the aisle have urged Trump to weigh the potential consequences of a military strike before acting.

“While all options should remain on the table, the President must prioritize working with our allies and other countries to achieve a diplomatic solution,” she added, noting that she does not believe Trump “fully aware of the cost of war” based on his rhetoric in recent months.

“I share Senator Graham’s assessment that we may soon be on the brink of war, but I cannot overstate how devastating such a war would be,” Murphy told CNN. “The US always says war is a last resort, but I’m worried that this administration is less wary of war than they should be.”

Republican Rep. Adam Kinzinger also stopped short of detailing the circumstances under which he would support a strike against North Korea, but did highlight the need for a credible US military force to counter the threat posed by Pyongyang.

“With an unhinged, power-hungry tyrant at the helm, North Korea has left us with very few options in the realm of diplomacy,” Kinzinger said in a statement to CNN. “Despite imposing greater sanctions, the Kim regime continues to threaten us and our allies — and we must defend ourselves by having a credible military option on the table.”

Some experts and members of the defense community admit that the recent rhetoric could be part of a continued effort to legitimize the US threat of military force to Pyongyang and Beijing.

“The only thing I can think of is the comments reflect a campaign to start behind-the-scenes diplomacy with China by showing we are willing to go to war,” the former senior defense official told CNN, noting that China has said if North Korea launches an attack they will stay neutral, but if the US starts the war they will intervene on behalf of Pyongyang.

But even if that is the case, the former official said that the talk coming from the US side is overheated and possibly dangerous.

“Are we really going to risk a confrontation with China over this?” the source said, adding “I don’t know if he actually believes this or is just acting as a surrogate for the President.”

“The coordinated nature” of the comments from McMaster and Graham “suggests to me that it’s more of a deterrence strategy aimed at convincing Pyongyang we could go to war at any moment if North Korea does something provocative,” Mintaro Oba, a former Korea desk officer at the State Department under Obama, told CNN.

Regardless of intention, Oba told CNN that “there is no good interpretation of what the administration is doing right now.”

“If the administration is seriously considering preemptive military action, they are out of their minds. If this is about deterrence, they’re misguided,” he said.