KLAMATH, Calif. — The gathering known simply as “Uncle Dave’s camp” begins at daybreak on the pebbled banks of the Klamath River, the age-old spruce and redwoods on the bluffs shrouded in mist.

Here on the Yurok Indian Reservation near the Oregon border, so remote that certain areas have yet to receive electricity, young male campers sit on cedar logs while keeping tabs on a river rock heated in a fire. The rock, hand-hollowed and chiseled with basketry patterns, contains a molten glue made from the dried air bladders of sturgeons. The syrupy concoction is a crucial ingredient for making feathered headdresses, hide quivers, obsidian-blade sticks and other forms of ceremonial dance ornaments, or regalia, that are at once works of art and living conduits to the spirit world.

The fishing camp that David Severns, a tribal member, started over 20 years ago has grown into a grass-roots culture camp dedicated to making regalia the old-fashioned way, before mail-order. The source is nature itself — elk and deer sinew, baleen from a whale stranded in the river and delicate fibers from wild irises culled from forested high country. It is part of a broader revival of ancestral ceremonial practices, including dances and songs, among native youths. The flower dance, which honors a young woman’s coming of age, is flourishing anew not only among the Yurok — the largest tribe in California and one of the poorest — but the Hupa, Karuk and other Northern California tribes.

“Regalia is collective medicine,” said Mr. Severns, 54, who spends most of April through October sleeping under the stars with the campers and his wife, Mara Hope Severns, 49, from the Kanatak tribe in Alaska. “To make them, you’ve got to have a pure heart, because the character of a person is reflected.”

The glue cooking in the rock, four sturgeons’ worth, may be an apt metaphor for the deep cultural connections shared by longtime campers. Mr. Severns refers to them as “my boys,” even though many are in their mid-20s and some have children of their own, whose tiny wet footprints crisscross the sand. (Mothers and wives are present, especially on weekends, but women are not allowed to touch men’s regalia and vice versa.) 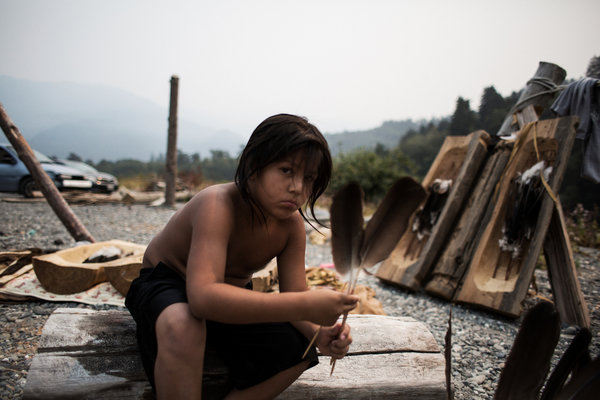 Wautec Thompson, 9, making Yurok dance regalia at a camp on the reservation. The art form is having a resurgence among young tribe members.

Each spring, Mr. Severns and the young men erect the camp from logs that have washed downstream during winter rains. Soon, the stretch of river known as “Blake’s Ripple,” for his maternal great-grandfather, springs to frenetic life. It’s a place where finely-crafted cedar boxes holding eagle and condor feathers are hollowed out with an adze, and brothers braid each others’ hair.

The camp is subsidized with about $4,000 in annual disbursements that Ms. Severns receives as an Alaska Native, along with elk, deer and groceries donated by tribal well-wishers.

Mr. Severns comes from a family of regalia makers. His grandmother lived in a traditional plank house and would send him off for several days to do chores for elders, which taught him the value of kindness, he said. He draws out prospective campers: “The brother who looks after the little brother. The boy who catches fish and is happy to give them up.” 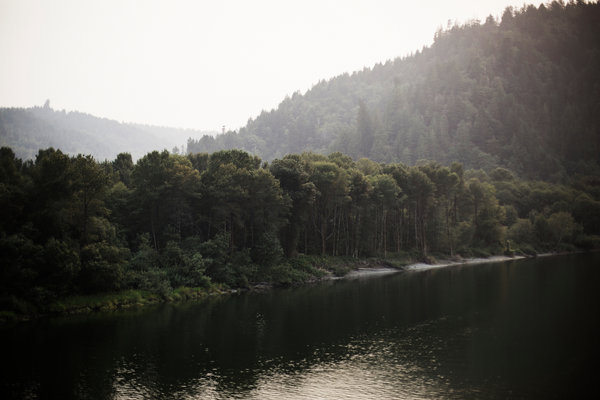 Natural materials used for dance regalia are gathered along the Klamath River on the Yurok reservation, near the site of a fishing camp turned culture camp.

“You wear your culture,” said Melissa Nelson, a Turtle Mountain Chippewa who is an associate professor of American Indian Studies at San Francisco State University and president of the Cultural Conservancy, a native-led indigenous rights organization. “Young people are hungry for meaning,” she added. “The opportunity to do hands-on work with abalone, clam beads, pine nuts and other materials is a thread to a healthier and more sustainable way of being in the world.”

Many youths now wear eagle feathers at graduation. But there has been friction at high schools in various states: This spring, Montana passed a law prohibiting schools and government agencies from creating policies that deny native students the right to wear culturally meaningful items at public events. 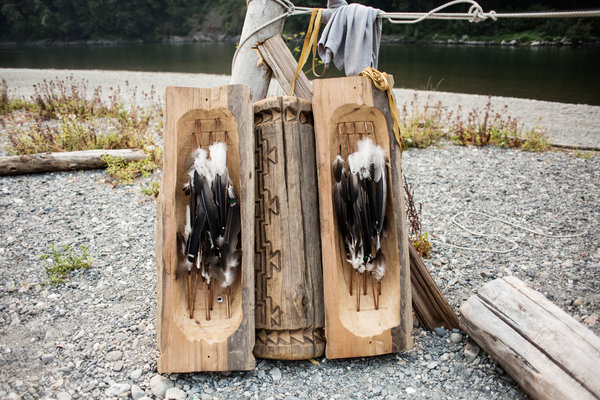 To the Yurok and other tribes, the regalia, resplendent with abalone and the scarlet crests of woodpeckers, are a dazzling life force. “It’s just another bird until you pray for it, burn a root for it, have a dance leader bless it — then it’s regalia,” Josh Meyer, a camper turned teacher, said of the eagle feathers he was assembling on the beach for the Brush Dance, a healing ceremony for sick children. The United States Fish and Wildlife Service makes eagle, condor and some other feathers available for religious and cultural use.

Raymond Mattz, 74, whose fight for tribal fishing rights was upheld in 1973 by the United States Supreme Court, recently showed a visitor his great great-great-grandfather’s dentalium shell necklace — long strands of white, toothlike shells once used as currency — that he wears while dancing.

“It just makes you feel strong,” Mr. Mattz said. “You come out with this and you’re the stuff, you know?” 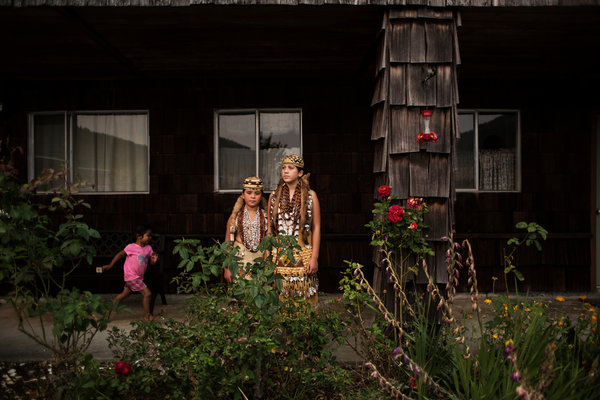 Keeya Wiki, 9, left, and her sister Te Maia Wiki, 11, in traditional dance regalia on the Yurok Indian Reservation in Klamath, Calif. Making regalia the old-fashioned way, from materials like elk and deer sinew, is being revived by native youths.

The materials can take two years or more to gather. In motion, they rustle like wind-chimes – a sound that TeMaia Wiki, 11, said “makes me feel like I’m home.” Up and down the river, the dances — some lasting 10 days — are attended by hundreds of people.

The idea of such sacred items being sequestered behind glass in museums has been a third rail for tribes since the passage of the Native American Graves Protection and Repatriation Act in 1990. Some 10,000 cultural touchstones have been returned so far — “a slow pace,” said Chip Colwell, a senior curator of anthropology at the Denver Museum of Nature and Science and author of the recent book “Plundered Skulls and Stolen Spirits: Inside The Fight to Reclaim Native America’s Culture.” One of the biggest repatriations has been 217 ceremonial pieces, including white deerskins and wolf headdresses, returned to the Yurok by the Smithsonian Institution in 2010. But thousands of artifacts in the United States and abroad have yet to return home.

A headdress can take years to make, and the patience required, said Bradley Marshall, a distinguished Hupa regalia maker, “focuses the children to look deeper into themselves and their community.” 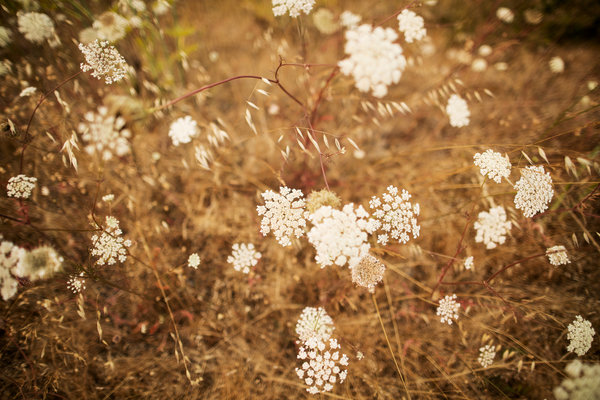 Fennel, growing wild on the Yurok reservation, is used in the making of dance regalia.

Such practices can help build resilience in young people whose history has been marked by trauma: genocide, forced relocation, children removed from their families and sent to distant United States government boarding schools that aimed to obliterate native language and culture. Yurok grandparents alive today were among those children.

The reverberations continue: In 2015 the Yurok tribe declared a state of emergency after seven young people committed suicide in one 18-month period in isolated Weitchpec (population 150). Jobs and economic development continue to be a major issue, with the unemployment rate at about 30 percent on the main part of the reservation, spiking to around 70 percent in isolated areas (the national rate is 4.4 percent).

The salmon population, a cultural and dietary staple, has been drastically reduced because of the recent drought, disease and other environmental woes — to the point that this year’s annual Yurok salmon festival relied on fish from Alaska. 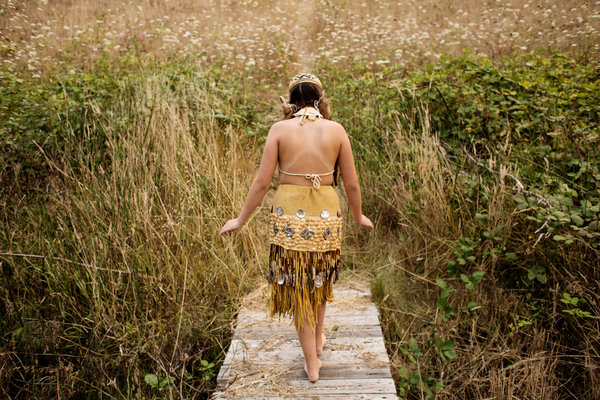 “Spirituality is the basis of who we are as a people,” said Susan Masten, a former president of the National Congress of American Indians who served as Yurok tribal chairwoman. “For young people, a strong sense of culture and spirituality helps with whatever they face out in the world.”

Lance Bates, 55, who now mentors young regalia makers (including his own children) and coaches sticks, a sport played by Northern California tribes, spent much of his 20s addicted to alcohol and methamphetamines. “In my era there were not a lot of good influences in the community,” he said. “When I was doing my bad habits, I’d see Dave and the boys carving wood and doing good things. I knew I could do better.”

Mr. Meyers, the teacher, grew up with alcohol in the family and a lot of anger. “A lot of us didn’t have father figures in our lives,” he said. “We looked to Dave for that.”

On his exquisite regalia box, Mr. Meyers chiseled a triangle pattern meant to suggest the back of a sturgeon, burnishing it with a torch to give it a coppery patina. “I showed up one day and never left,” he said of the camp. “Making regalia is a big part of who I am.”