A Guide to the Violence in Charlottesville – NYTimes.com
https://mobile.nytimes.com/2017/08/13/us/charlottesville-virginia-overview.html?action=click&module=Top%20Stories&pgtype=Homepage

If you are just catching up on the weekend’s events in Charlottesville, Va., or overwhelmed by the volume of news, here is an overview of The New York Times’s coverage.

Skirmishes, and then a speeding car

White nationalists gathered on Saturday for a “Unite the Right” march in Charlottesville, where they were met by counterprotesters. Taunting led to shoving, which escalated into brawling. Then, around 1:45 p.m., a car plowed into another vehicle near a group of counterprotesters, creating a chain reaction that sent people flying. (Initial reports said the car had run directly into the crowd.)

One person was killed; she was identified as Heather D. Heyer, 32, a paralegal from Charlottesville who “was a passionate advocate for the disenfranchised and was often moved to tears by the world’s injustices.” Read The Times’s profile of Ms. Heyer.

Nineteen others were injured in the episode, some of them critically. In total, at least 34 people were wounded in the clashes, and Gov. Terry McAuliffe of Virginia declared a state of emergency. 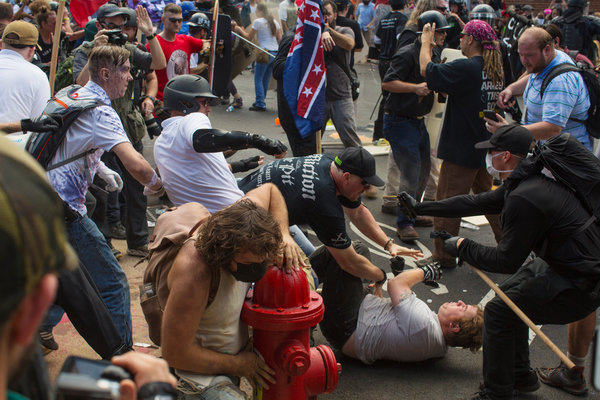 The gathering on Saturday turned violent. At least 34 people were injured.

Officials identified the driver of the car as James Alex Fields Jr., 20, of Maumee, Ohio, a city near Toledo. One of Mr. Fields’s former history teachers called him “a very bright kid, but very misguided and disillusioned,” noting that he had written a report that was “very much along the party lines of the neo-Nazi movement.” Here is what we know about Mr. Fields.

Hawes Spencer, a reporter working for The Times in Charlottesville, recounted what he saw.

On Saturday afternoon, President Trump condemned the “egregious display of hatred, bigotry and violence on many sides” but, conspicuously, did not single out white nationalists or neo-Nazis. Pressed on whom Mr. Trump was blaming, an unnamed White House spokesman told reporters on Saturday: “The president was condemning hatred, bigotry and violence from all sources and all sides. There was violence between protesters and counterprotesters today.” 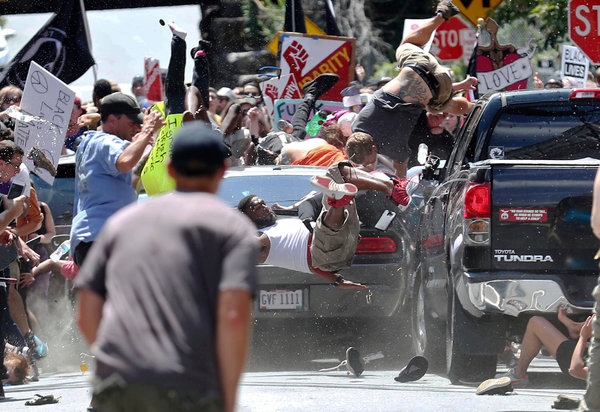 A car struck another vehicle near a crowd of counterprotesters, killing a 32-year-old woman, Heather D. Heyer.

Democrats and Republicans criticized Mr. Trump for refusing to specifically condemn white nationalists, many of whom supported his presidential campaign, and for equating their actions with those of the counterprotesters. On Sunday, unnamed White House officials tried to do damage control, saying: “The president said very strongly in his statement yesterday that he condemns all forms of violence, bigotry and hatred. Of course that includes white supremacists, K.K.K. neo-Nazi and all extremist groups.”

Thomas P. Bossert, the White House homeland security adviser, said the president had not wanted to “dignify the names of these groups of people.” 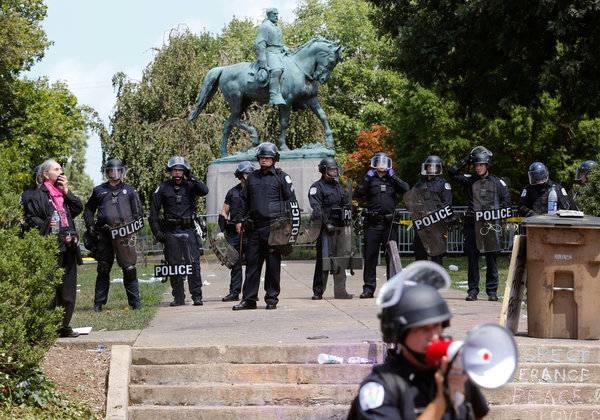 Police officers in riot gear mobilized around a statue of Robert E. Lee that Charlottesville officials plan to remove.

Ivanka Trump, the president’s daughter, was more explicit, tweeting on Sunday morning, “There should be no place in society for racism, white supremacy and neo-nazis.”

The city looks for answers

On Sunday, Charlottesville tried to regroup, and to apportion blame. Supporters of the white nationalists and the counterprotesters both criticized the response of law enforcement to the clashes on Saturday, saying the police could have done more to stop the situation from escalating.

Video President Trump speaking Saturday from his golf club in Bedminster, N.J., about the violence in Charlottesville, Va., where a state of emergency was called after white nationalists clashed with counterprotesters.

Mr. McAuliffe rejected that criticism, saying that even though much of the crowd was armed, “not a shot was fired,” and that the car attack could not have been prevented.

In Charlottesville and beyond, people also grappled with the blatant display of attitudes that many believed had been buried. Saturday’s events were “perhaps the most visible manifestation to date of the evolution of the American far-right, a coalition of old and new white supremacist groups connected by social media and emboldened by the election of Donald J. Trump,” the Times reporters Richard Fausset and Alan Feuer wrote.

The background to the violence

Nominally, the rally on Saturday was organized in opposition to a plan by local officials to remove a statue of Robert E. Lee, the Confederacy’s top general, from Emancipation Park in Charlottesville. That plan prompted a similar protest in May, led by the white nationalist Richard B. Spencer, as well as a Ku Klux Klan rally in July. The removal of Confederate monuments has also stirred up anger in other cities, including New Orleans.

However, the forces behind the rally run much deeper than the removal of one statue in Virginia. Right-wing extremism, including white nationalism and white supremacism, is on the rise, and many white nationalists felt emboldened by the election of Mr. Trump, according to the Southern Poverty Law Center.

Charlottesville had been bracing for the rally, which was planned well in advance. (Last week, Airbnb confirmed that it had canceled some accounts and bookings associated with the event.) Several hundred white nationalists marched on Friday night, chanting racist and anti-Semitic slogans and carrying torches.