To Punish Putin, Economic Sanctions Are Unlikely to Do the Trick – NYTimes.com
https://mobile.nytimes.com/2017/07/25/business/economy/economic-sanctions-russia-congress.html?action=click&module=Top%20Stories&pgtype=Homepage

Kim Jong-un was still in college in 2006 when the United Nations Security Council, in a resolution drafted by the United States, imposed economic sanctions on his father’s regime to stop North Korea from becoming a nuclear power.

Washington enlisted the cooperation of China, the only country with the capacity to sever North Korea’s economic lifeline. Ratcheting up the punishment last year, Congress passed the North Korea Sanctions and Policy Enhancement Act, aiming for the nation’s economic jugular.

It failed. This month, Mr. Kim — supreme leader since the death of his father in 2011 — tested an intercontinental ballistic missile that could feasibly deliver a nuclear warhead all the way to Alaska.

This week Congress is expected to add to its arsenal of international deterrents, writing into law a panoply of economic penalties against Russia and — critically — curtailing President Trump’s ability to lift them on his own.

Annoying Vladimir V. Putin could be considered in and of itself a worthy goal. Or, as Gary Hufbauer of the Peterson Institute for International Economics noted, “a big part of the bill is a slap to President Trump for his close association with Russia.” Whatever the case, legislators might want to explain what they are after.

If there are members of Congress who believe that the package will change Mr. Putin’s behavior — convince him of the merits of returning Crimea to Ukraine, perhaps, or persuade him to stop his hacker friends from tinkering with foreign elections — they might be interested in a decommissioned North Korean reactor I have for sale.

Mr. Hufbauer and his colleagues studied more than 200 cases of economic sanctions imposed since the Allied blockade of Germany in World War I. One critical conclusion: Better keep the goals modest.

When sanctions “have modest objectives and are aimed at countries that are not terribly powerful but have tasted a little flavor of democracy and have close economic connections to the sanctioning coalition,” Mr. Hufbauer told me, they succeed in changing countries’ behavior about half the time.

But when the goal is ambitious, the economic ties not overwhelming, the target country powerful, and the target government autocratic — think Russia, Ukraine, hacking — their track record is not particularly good. “A very small fraction of those end in success,” he added.

The suspension of government aid from the United States to Guinea-Bissau may have helped persuade Gen. Verissimo Correia Seabra to hold elections the year after he overthrew the elected government of President Kumba Yala in 2003. Sanctions by the European Union, the African Union and the United States probably helped bring about elections in the Central African Republic after a 2003 coup. 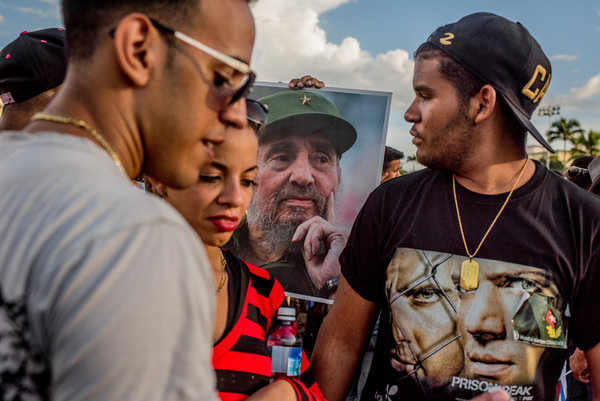 People gathered to honor Fidel Castro in Santiago de Cuba in December 2016, shortly after his death. A half-century embargo failed to bring about regime change in Cuba. Russia under Vladimir V. Putin seems a rather tougher case.

But the haul is meager. On the other end, Bashar al-Assad is still in power in Syria, as is Robert Mugabe in Zimbabwe — despite more than a decade’s worth of economic sanctions by the United States and the European Union. Then there is the tale of Cuba, in which a half-century embargo has failed to bring about regime change in a tiny, economically fragile country only 100 miles off the coast of Florida.

Sanctions have proved powerless to push Turkey out of Cyprus; to move Colombia, Venezuela or Nigeria to comply with Washington’s war on drugs; to persuade India or Pakistan to abandon their nuclear arsenals.

Even the ostensible “successes” of sanctions should be scrutinized with some skepticism. Supporters like to argue that sanctions were instrumental in bringing Iran to the negotiating table. Even if sanctions imposed by President Barack Obama in 2014 did not compel Russia to leave Crimea, they add, without them Mr. Putin might have felt emboldened to send Russian forces across the Baltic republics.

And yet one could argue that Mr. Putin hasn’t moved on the Baltics because they are not as critical to Russia as Ukraine, a country through which it pumps 80 percent of the natural gas it sells to Western Europe; which was home to its Black Sea fleet before the move on Crimea; and which was flirting with moving out of the Russian orbit into the hostile arms of NATO.

Crediting sanctions with bringing Iran to the negotiating table also overlooks Iran’s choices. Leaders in Tehran knew that if the country developed a nuclear weapon, it faced a decent chance of a military strike by Israel, the United States or both. Coming to the negotiating table would not forestall its nuclear ambitions forever. And it might actually set the stage for what could prove to be a productive relationship with Washington.

There are good reasons that sanctions do not work as advertised. They often leak, as targeted countries can redirect trade to countries that are not in on the punishment. They can, indeed, bring misery to a target country — especially when they are multilateral rather than imposed by the United States alone — but their impact weakens over time.

Critically, misery often does not extend to the ruling class — which can even benefit from the burst of patriotic fervor that sanctions bring about. Despite the economic hardship wrought on ordinary Russians by the combination of international sanctions and the decline in the price of oil and gas, the annexation of Crimea bolstered Mr. Putin’s popularity. The case of North Korea suggests that even in the absence of nationalistic fervor, autocratic regimes can maintain control through repression.

It is a bit perplexing that despite their shortcomings, economic sanctions became such a popular tool of international statecraft. They remain all the rage in Washington. Maybe it is that the alternative — military intervention — is just too risky to stomach. And the nation’s leaders must be seen to be “doing something.”

As Mr. Hufbauer and his colleagues point out, American presidents impose sanctions to “dramatize their opposition to foreign misdeeds, even when the likelihood of changing the target country’s behavior is remote.” The action may be ineffectual, but it’s better than inaction.

And, of course, there are domestic politics to consider.

When Congress in 1996 tightened an economic embargo that had failed for 36 years to bring down Fidel Castro’s regime in Cuba, it could hardly have expected that the new tweaks would succeed where the previous incarnation had failed. Indeed, the backlash against the Helms-Burton Act, which sought to punish companies from third countries that did business in Cuba, arguably weakened the international legitimacy of American policy.

But the law still served a purpose: to signal to politically powerful Cuban-American constituencies in Florida and New Jersey that Congress stood behind them.

Here is where we might find a rationale for Congress’s move against Russia today. It is not intended to change Russian behavior — or even to demonstrate leadership to American allies. (Indeed, the European Union is dead set against the sanctions, which could harm European companies.) It looks like a signal to American voters that if Mr. Trump sees Mr. Putin as an ally, Congress disapproves.