You Don’t Have to be College-Bound to Take a Gap Year – NYTimes.com
https://mobile.nytimes.com/2017/07/14/your-money/you-dont-have-to-be-college-bound-to-take-a-gap-year.html?action=click&module=Discovery&pgtype=Homepage

Dr. Dennis Sinar remembers when it dawned on him: He was ready for a break from work.

A gastroenterologist and professor of medicine at East Carolina University in Greenville, N.C., Dr. Sinar was working on a research paper in the university library when it happened. “I just said to myself, ‘I’m really sick of doing this stuff,’” he said. This was 10 years ago, when he was 59.

Dr. Sinar explored the possibility of a sabbatical, but the university would have required him to do something related to his work during the break — which was just what he didn’t want to do. Then he ran across a newspaper article on companies that arrange gap-year adventures, though most of them catered to high school and college students.

“They didn’t talk about anything for mature people,” he recalled. “But I just picked up the phone and called one of them.”

In short order, Dr. Sinar found himself with a summer apprenticeship to an expert on stonemasonry in Alaska. “My wife and I were renovating and selling houses at the time,” he said, “and I thought I might learn some things that would help me with those projects.” In exchange for room and board, he studied how to create stone facings for houses; the work entailed learning how to collect appropriate rocks and then fit them into the available spaces. “It was like a big jigsaw puzzle,” he said.

For midcareer and older workers like Dr. Sinar who have the financial means and job flexibility to take time off, gap experiences can help answer questions about what they want to do in retirement — or simply recharge their batteries.

Gap years are especially helpful for older people working through career transitions. The explorations can be longer or shorter than a year, of course, and they need not be prohibitively expensive, said Holly Bull, president of the Center for Interim Programs in Princeton, N.J., which helped Dr. Sinar arrange his gap experience.

“We mainly work with students,” Ms. Bull said. “But we see an increasing number of older adults who aren’t completely retired. They’re looking for a new direction and asking themselves what they want to do for the rest of their lives.”

Gap experiences that involve travel are common, according to Catherine Allen, an author of a 2011 book, “Reboot Your Life: Energize Your Career & Life by Taking a Break.” Many people use the time to go back to school, reconnect with families or friends, or follow a passion. “We call it giving yourself the gift of time,” Ms. Allen said.

Few employers offer workers the opportunity to take breaks and return to their jobs, so sometimes the “gap year” is actually more of a gap between work and retirement. Unpaid sabbatical leave is offered by only 12 percent of employers, according to the Society for Human Resource Management, and only 4 percent of employers offered paid leave programs last year. As a result, most adult gap experiences require quitting a job.

Dr. Sinar was one of the lucky few who could return to the same position. After he learned about stonemasonry, he traveled to Kathmandu in Nepal for back-to-back internships in Tibetan and ayurvedic medicine. “At the time, Western doctors were wary of this kind of homeopathic medicine,” he said, “but I was interested in bringing some of it home for my patients.”

Then he was off to Romania, where he worked with a team of archaeologists who were restoring a castle. The final stop was an apprenticeship to a master restorer of antique furniture in Pennsylvania. In all, he was away from his job for a year, and then retired five years later. 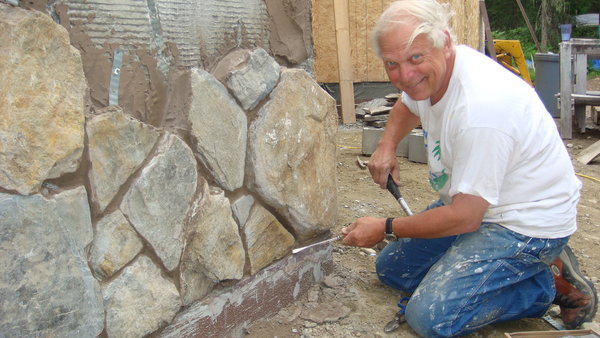 Dr. Dennis Sinar, who took a gap year at 59, had several experiences, including an apprenticeship to an expert on stonemasonry in Alaska. He is now retired.

His retirement, he said, has been shaped by the gap experiences. “Before this, I thought of myself as a left-brain person, but now I’m much more right-brained,” Dr. Sinar said. A hobby writing fiction has blossomed in retirement, and he has published two collections of short stories. “I never would have thought of making that kind of stretch before,” he said.

Dr. Sinar says he spent roughly $10,000 on his gap experiences during his unpaid leave from the university — money he said was well spent: “How can you put a price on something that changes your life?”

Kathleen Baskin was a 55-year-old empty nester when she left her job last summer as director of water policy for the state of Massachusetts to enroll in a one-year master’s program for midcareer professionals at the John F. Kennedy School of Government at Harvard.

“I knew my job too well — I wasn’t learning anything new,” said Ms. Baskin, who was trained as a civil engineer. “I could have kicked back and cruised 10 or 15 years to retirement, but that didn’t sound fun to me.”

Her classes at the Kennedy School, in areas like finance, international negotiation and diplomacy, were “mind-benders,” she said. And studying with students in their mid-to-late 30s was enlightening. “In addition to learning how to be a student again,” Ms. Baskin said, “I have had to keep up with technology, and make sure that I don’t climb the stairs too slowly.” She graduated in May and is looking for a leadership role at a nonprofit organization that works on environmental or climate change issues.

The Harvard program represented a considerable investment: Ms. Baskin paid $50,000 in tuition, and left a position where she had earned $100,000 annually. She converted unused vacation time into pay that covered about a quarter of her expenses for the year, and funded the rest from savings and a loan and by reducing expenses.

For Kathy Thomas, who is 63 and lives in suburban Philadelphia, paid or subsidized jobs have kept down the cost of gap experiences. She has had a succession of them — also arranged through Ms. Bull’s firm — since retiring two years ago from Bank of America, where she was a senior vice president overseeing commercial banking in Pennsylvania and Delaware.

“You’ll always pay for your airfare — that is the biggest cost,” Ms. Thomas said.

So far, she has worked two weeks at an elephant sanctuary in Thailand (run by the nonprofit Save Elephant Foundation), volunteered for six weeks at a home for abused and neglected girls in South Africa, attended a weeklong writing retreat in North Carolina, and tended the fields for two weeks at an organic farm in Scotland.

The elephant sanctuary provided room and board for $335 a week. “It was very basic accommodation with running water and flushing toilets,” Ms. Thomas said. “There was no heat or air-conditioning, but they served three really wonderful vegetarian meals a day.” And the organic farm in Scotland provided room and board in a castle.

Ms. Thomas had not been eager to retire, but she also worried about early mortality because no one in her mother’s family had lived past 69. “I had so much I wanted to see and do, and I knew I couldn’t wait another moment to retire and get to it,” she said.

One day at work, a light bulb went on. “A colleague was telling me about his son’s preparation for a gap year before starting college,” Ms. Thomas said. “I thought, ‘Why couldn’t I do that for my retirement?’”

She spent about six months planning her gap experiences, and then gave three months’ notice of her intent to retire. Today, Ms. Thomas is still exploring and is not sure when the process will stop.

“As long as I can continue learning and growing,” she said, “I’ll keep going.”