LONDON — At the Trump National Golf Club outside Washington, which hosted the Senior P.G.A. Championship this weekend, the president’s coat of arms is everywhere — the sign out front, the pro shop, even the exercise room.

The regal emblem, used at President Trump’s golf courses across the United States, sports three lions and two chevrons on a shield, below a gloved hand gripping an arrow.

A different coat of arms flies over Mr. Trump’s two golf resorts in Scotland. The lions on the shield have been replaced by a two-headed eagle, an image the company has said represents the “dual nature and nationality” of Mr. Trump’s Scottish and German roots.

But this emblem was not just about honoring his heritage.

The British are known to take matters of heraldry seriously, and Mr. Trump’s American coat of arms belongs to another family. It was granted by British authorities in 1939 to Joseph Edward Davies, the third husband of Marjorie Merriweather Post, the socialite who built the Mar-a-Lago resort that is now Mr. Trump’s cherished getaway. 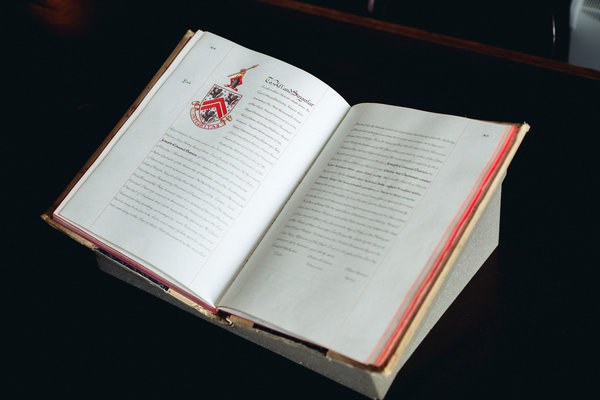 The emblem was granted to Joseph Edward Davies, husband of Marjorie Merriweather Post, who built the Mar-a-Lago resort that is now Mr. Trump’s getaway.

In the United States, the Trump Organization took Mr. Davies’s coat of arms for its own, making one small adjustment — replacing the word “Integritas,” Latin for integrity, with “Trump.”

Joseph D. Tydings, a Democrat and former United States senator from Maryland who is the grandson of Mr. Davies, learned that Mr. Trump was using the emblem, at least at Mar-a-Lago, when he visited the property. Mr. Trump had never asked permission.

“There are members of the family who wanted to sue him,” said Mr. Tydings, a lawyer who wears his family’s coat of arms on a ring. “This is the first I’ve ever heard about it being used anywhere else.”

Mr. Trump tried to bring the American version to Scotland a decade ago.

He used the emblem on promotional materials when he started marketing a new golf course development in Aberdeenshire, on Scotland’s east coast. But the materials ran afoul of the coat-of-arms authorities in Scotland — a uniquely British problem. 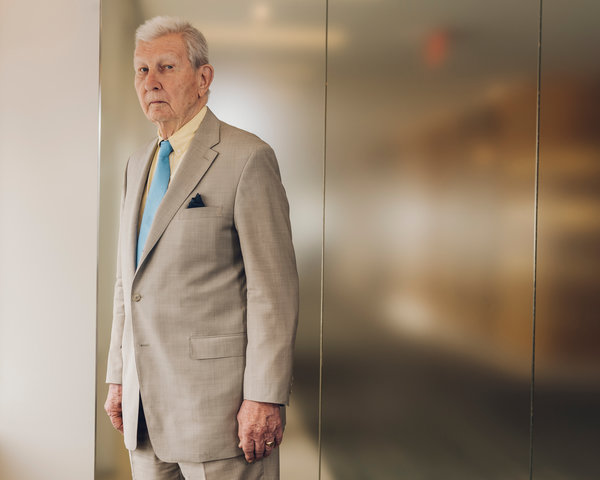 Joseph D. Tydings, a former senator who is the grandson of Mr. Davies, learned that Mr. Trump was using the emblem when he visited Mar-a-Lago.

Mr. Trump hadn’t registered the emblem under the Lyon King of Arms Act passed by the Scottish Parliament in 1672. The Court of the Lord Lyon has jurisdiction over the use and misuse of coats of arms.

Back then, Mr. Trump also tried to trademark the emblem in Britain. But the application was rejected by the trademark office.

By 2012, when the golf course in Aberdeenshire opened, the new coat of arms had appeared. The same one is used at Mr. Trump’s course in Ayrshire, on Scotland’s west coast, which he bought in 2014. That year, Mr. Trump trademarked the redesigned emblem.

Britain’s trademark office would not initially acknowledge the earlier application by Mr. Trump. It provided a copy last month only after The New York Times made a Freedom of Information request, and would not say why the application was rejected, citing a law restricting its ability to release information. 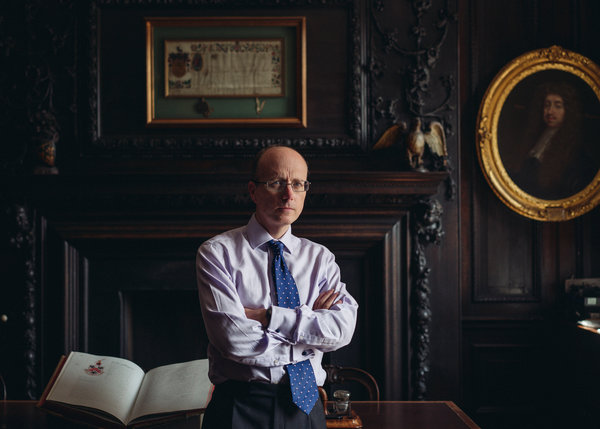 Clive Cheesman is a herald at the College of Arms, which oversees coats of arms in England, Wales and Northern Ireland. He said that when Mr. Trump tried to trademark the crest in Britain, it got his organization into “some difficulty.”

The College of Arms, which oversees coats of arms in England, Wales and Northern Ireland, provided more detail. The emblem originally submitted in 2007 by Mr. Trump to Britain’s trademark office matched one that had been granted to Mr. Davies, an American of Welsh descent who once served as ambassador to the Soviet Union.

“It couldn’t be a clearer-cut case, actually,” said Clive Cheesman, one of the college’s heralds, who oversee coats of arms, their design and their use.

“A coat of arms that was originally granted to Joseph Edward Davies in 1939 by the English heraldic authority ended up being used 10 or 15 years ago by the Trump Organization as part of its branding for its golf clubs,” said Mr. Cheesman, a lawyer by training. “This got them into difficulty.”

The White House referred questions to the Trump Organization, which did not respond to requests for comment.

Mr. Tydings wears a ring with his family’s coat of arms.

The organization has trademarked the Davies coat of arms in the United States, which has far less attachment to such symbols. It is used on the company’s website and is a prominent branding detail of Mr. Trump’s many American golf courses and resorts — emblazoned on golf balls, shirts and bottles of body lotion.

When the Trump Organization created a Civil War memorial at the golf course near Washington commemorating a battle and a “river of blood” that never occurred, a plaque marking the fictitious event was embossed with the coat of arms.

Mr. Tydings, 89, was close to Ms. Post, his step-grandmother, whom he referred to as “Mommy-da.” He spent much of his youth at Mar-a-Lago. His grandfather, Mr. Davies, was a lawyer and diplomat, also serving as ambassador to Belgium and as a special envoy for President Harry S. Truman.

Mr. Tydings, who still practices law, said that several years ago he talked some of his cousins out of suing Mr. Trump, because he knew it would be an endless and costly exercise. 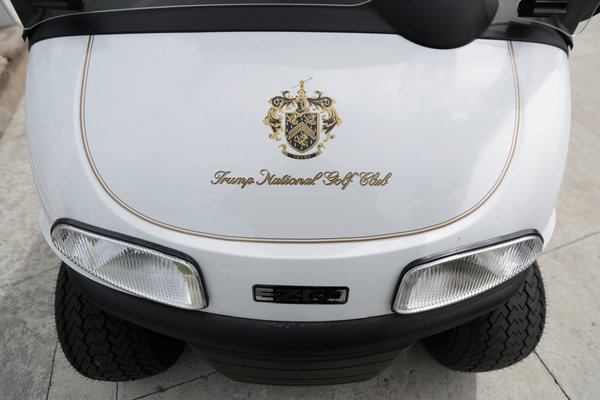 The crest at the Trump National Golf Club in Bedminster, N.J. Mr. Trump’s courses in Scotland use a different coat of arms.

“I just told the other members of my family that you can’t win on this,” he said. “You’ll borrow for two generations to sue him.”

“I know Trump very well,” he added. Mr. Tydings was a senior partner at Finley, Kumble, a giant firm in its day that represented Mr. Trump and other owners of the fledgling United States Football League in an unsuccessful suit against the N.F.L.

There is one historical parallel between Mr. Trump and Mr. Davies.

Both men were controversially pro-Russian. Mr. Davies, who played an important role as a go-between for President Franklin D. Roosevelt and the Soviets, has been criticized for being taken in by Stalin’s propaganda machine.

Mr. Tydings was asked what Ms. Post and his grandfather would make of Mr. Trump.

Ms. Post, he said, “would be pleased that everything is the same” at Mar-a-Lago, “except for the Trump name and portraits.”

His grandfather, he added, “would be rolling over in his grave to think he was using his crest.”