Where Anti-Tax Fervor Means ‘All Services Will Cease’ – NYTimes.com
https://mobile.nytimes.com/2017/05/13/us/anti-tax-fervor-roseburg-oregon-.html

ROSEBURG, Ore. — Inside the big wood-paneled downtown library here, a sign spells out the future in four words. Come June 1, “All services will cease.”

For generations in America, small cities like this declared their optimism and civic purpose with grand libraries that rose above the clutter of daily life and commerce. But last fall, Douglas County residents voted down a ballot measure that would have added about $6 a month to the tax bill on a median-priced home and saved the libraries from a funding crisis. So this spring, it has been lights out, one by one, for the system’s 11 branches. The Roseburg central library here is the last to go.

“We pay enough taxes,” said Zach Holly, an auto repair worker in a shop a few blocks from the library who said his vote against the tax was not about libraries at all, but government waste. “I vote against taxes, across the board,” he said.

An instinctive reaction against higher taxes has been stitched into the fabric of America in recent decades, starting with the property tax revolts of the 1970s through the anti-tax orthodoxy expressed by many conservative members of Congress today. But few places in the nation are seeing the tangled implications of what that means — in real time — more vividly than in southwest Oregon, where a handful of rural counties are showing what happens when citizens push the logic of shrinking government to its extremes.

“The trust is gone from people who are paying the bills,” said Court Boice, a commissioner in Curry County, which borders Douglas. At least four property tax proposals aimed at keeping county services afloat, like the library rescue plan in Douglas, have failed in Curry County over the last decade. 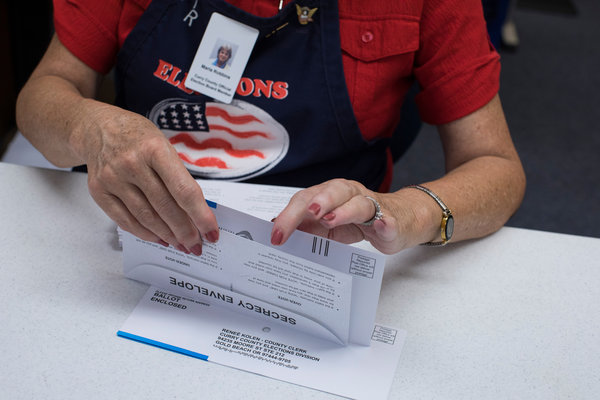 An election worker stuffing ballots into envelopes at the courthouse in Gold Beach, Ore., part of Curry County. The Curry County clerk, who has one full-time staff member left in her elections division, is facing a possible 30 percent cut in funding in her budget this year.

If a crime is reported after midnight there, best not hold your breath for a response, since cuts to the sheriff’s budget have meant the end of round-the-clock staffing. Even conducting an election this fall could be beyond reach, said Reneé Kolen, the Curry County clerk, who has one full-time staff member left in her elections division, and is facing another possible 30 percent cut in funding this year in her budget.

Just east of Curry in Josephine County, the jail has been defunded after nine consecutive defeats of public safety tax levies — there will be another try next week in a special election — leading to a policy of catch-and-release for nonviolent criminals.

Demographic and economic changes in this swath of the Pacific Northwest, where thick forests brush down to the rocky Pacific Coast, have given the tax resistance movement its backbone. Retirees who came in recent years for the low housing costs or the conservative political culture have become a major voting bloc. And the tech jobs that are fueling growth in Portland, a three-hour drive north, are mostly just a dream.

But what is even more significant is that for many years, timber-harvesting operations on public lands here paid the bills, and people got used to it. A law passed by Congress in the 1930s specified that a vast swath of forest lands that had passed into corporate hands and back into federal control would be managed for county benefit. But then logging declined, starting in the 1980s and 1990s, as it did across many other parts of the West, and the flood of timber money slowed to a trickle, with only a stunted tax base to pick up the difference. The property tax rate in Curry County is less than a quarter of the statewide average. Douglas County residents pay about 60 percent less than most state residents.

President Trump’s plan to overhaul the nation’s corporate and personal income-tax systems adds another wrinkle. His proposal would not directly affect local property tax rates, but the ripple effects, several local officials said, could be profound and unpredictable. More money in voters’ wallets from tax cuts in Washington could reduce the sting in asking people to pay more at home, or it could just reinforce the idea that all taxes are meant to go down.

Oregon has no state sales tax, and also limits some property tax growth rates, through laws passed in the 1990s. 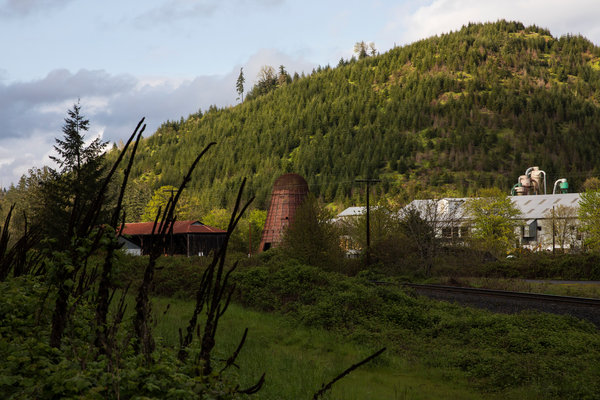 An abandoned timber mill in Drain, Ore. For many years, timber-harvesting operations on public lands in this part of Oregon paid the bills, and people got used to it.

“Back in the heyday it was great,” said Jim Kolen, the Curry County assessor, and the husband of the county clerk, recalling the flush days of timber revenue. “But it was a curse, too.”

Some residents said they thought local governments here could simply self-destruct and shut down in bankruptcy or paralysis, while others saw a window of experimentation and reinvention, and a new path forward through interconnecting government with nonprofits, volunteers and private companies.

Jerry Wyatt, 66, a sales manager and lifelong resident of the Roseburg area, said conservatives like him had seen the truth that government often operated for its own benefit, not the people’s. Like most people here, Mr. Wyatt is a strong supporter of Mr. Trump, who got two-thirds of the vote in Douglas, even as a majority of voters in Oregon supported Hillary Clinton. Mr. Trump is changing Washington, Mr. Wyatt said. Change on the local level starts in places like Douglas County.

“There’s no end of waste,” said Mr. Wyatt, who said he voted for the library tax because it was a dedicated tax for a specific purpose he supported, but that most other government was either incompetent or bloated or both. “We need less people on the county payroll,” he said in an interview on the library steps.

Counties that draw a line on taxes are also unlikely to get bailed out by state governments, including Oregon’s, which are facing budget stresses and tax-resistance movements of their own. Revenue came in less than budgeted in 25 states last year, the most since the Great Recession, according to a report by the National Association of State Budget Officers. Louisiana and Wyoming have laid off workers. Alaska has slashed funding for education. Here in Oregon, Gov. Kate Brown, a Democrat, ordered a hiring freeze last month as the state wrestles with a $1.6 billion shortfall.

So what does life in government retreat look like?

It looks like the house on Hubbard Creek Road in Curry County, where owners went for more than 10 years without paying any property taxes at all because the county assessor’s office couldn’t field enough workers to go out and inspect. The house, nestled in the woods with a tidy blue roof and skylights, dodged more than $8,500 in property taxes that would have gone to support the schools, fire district and sheriff, because government had gotten too small to even ask. So things fall even further, with cuts to agencies that actually bring in revenue prompting further cuts down the line. 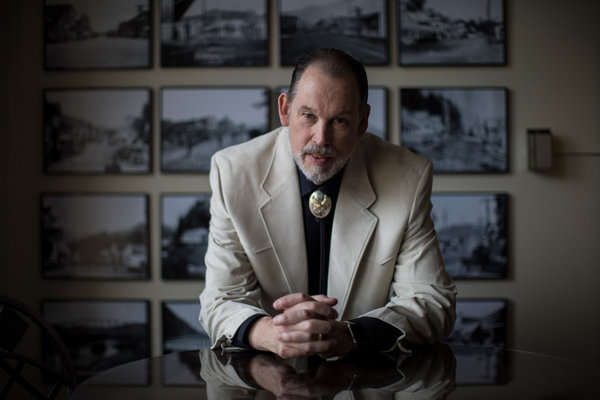 Gary Leif, a Douglas County commissioner, said budgeting was like a pyramid, with the must-haves, like public safety, at the base; the nice-to-haves in the middle; and the no-longer-attainable, like a publicly supported library, at the top.

It also looks like Gary Leif’s pyramid chart. He is a commissioner in Douglas County, and he said that budgeting here was no longer about pie charts showing where the revenue goes and which departments get what. Instead, it is all triage now: The must-haves, like public safety, are at the base; the nice-to-haves in the middle; and the no-longer-attainable, like a publicly supported library, at the top.

But there are surprises on this new road, too. When the Curry County parks department and juvenile department were merged a few years ago, for example, it did not seem like a natural fit, said Jonathan J. Trost, who runs both agencies. But then, for budgetary reasons, he started deploying teenage offenders to clean the parks as part of their community service. Recidivism rates went down, and Curry now has one of the state’s lowest percentages of juveniles committing a second offense. It probably wouldn’t have happened, Mr. Trost said, without forced improvisation.

Mr. Leif said a rethinking of what libraries do and how to fund them could also eventually bring back the library system here in a new and creative way, perhaps through some combination of volunteers and privatization. He said the real crisis for the county would not hit for a year or two, when the last of the savings built up during the fat years of logging taxes ran out. And he said he was already preparing the argument to make to voters: that they will finally have to pay, if only for public safety.

“They’ll have to,” he said in an interview in his office. “But will they?”

The divisions over the library remain raw. Terry Bean, 54, a construction manager who was working on his daughter’s house on a recent morning in Roseburg, voted for the library tax, and said that “no” voters just saw another tax, not an institution at risk.

There is conservative, said Mr. Bean, flicking a cigarette butt into the bed of his pickup truck, and then there is community. And people got them confused.

The library, he said, was something a person could use — for computers, if not for books — even if that person didn’t have a dime, and he still respects that.