President Trump has promised to revive the coal industry and double down on fossil fuels, creating “so many energy jobs,” but he has so far ignored the increasingly important role of renewable power in America’s energy economy.

Those numbers come from a Department of Energy report published in January by the Obama administration that provides the most complete picture available of American energy employment.

In 2016, 1.9 million Americans were employed in electric power generation, mining and other fuel extraction activities, according to the report – a field we’ll call power creation for short.

The coal industry, which has shed jobs since 2012, primarily due to competition from cheap natural gas, employed just over 160,000 workers nationwide. About 54,000 coal jobs were in mining.

It’s important to note that power creation isn’t the only source of energy employment. The Energy Department report found another 2.3 million jobs in energy transmission, storage and distribution, a number that includes powerline and pipeline workers and more than 900,000 retail jobs, such as gas station workers and fuel dealers. If non-traditional energy workers are included in the mix – those involved in manufacturing and installing energy-efficient products – the total number of energy-related jobs swells to 6.4 million.

Solar has more jobs across the country, but coal is a more important employer in two states. 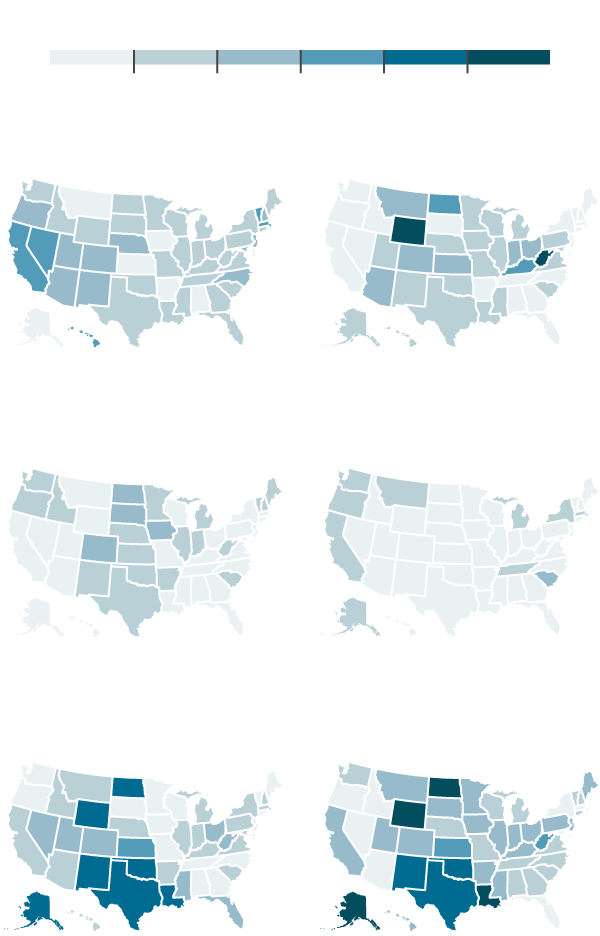 Employees in industry per 10,000 workers

Of course, energy jobs aren’t equally distributed throughout the country.

California, a state with robust renewable energy standards and installation incentives, had the highest rate of solar power jobs per capita last year. Roughly 84 of every 10,000 workers in the state held part or full time jobs in the solar industry. Nevada came in close second, followed by Hawaii, Vermont and Massachusetts.

Midwest and Great Plains states had the highest rates of wind energy employment. The region has been leading the way on renewable power generation thanks to its strong wind resources.

In Wyoming, nearly 300 of every 10,000 workers – or 3 percent – were employed in coal power generation and mining last year. In West Virginia, the coal industry accounted for 2 percent of employment. Those states had many fewer jobs in solar and wind energy.