Guess what Steven A. Ballmer has been up to for the last several years. (No, not just cheering for the basketball team he owns, the Los Angeles Clippers.) It’s a novel project, and he plans to take the wrapping off it Tuesday.

But first the back story, which is a valuable prelude to a description of the project itself.

When Mr. Ballmer retired as chief executive of Microsoft in 2014, he was only 57 and quickly realized “I don’t, quote, ‘have anything to do.’”

As he looked for a new endeavor — before he decided to buy the Clippers — his wife, Connie, encouraged him to help with some of her philanthropic efforts, an idea he initially rejected.

“But come on, doesn’t the government take care of the poor, the sick, the old?” Mr. Ballmer recalled telling her. After all, he pointed out, he happily paid a lot of taxes, and he figured that all that tax money should create a sufficient social safety net.

Her answer: “A, it won’t, because there are things government doesn’t get to, and B, you’re missing it.”

That conversation led Mr. Ballmer to pursue what may be one of the most ambitious private projects undertaken to answer a question that has long vexed the public and politicians alike. He sought to “figure out what the government really does with the money,” Mr. Ballmer said. “What really happens?”

On Tuesday, Mr. Ballmer plans to make public a database and a report that he and a small army of economists, professors and other professionals have been assembling as part of a stealth start-up over the last three years called USAFacts. The database is perhaps the first nonpartisan effort to create a fully integrated look at revenue and spending across federal, state and local governments.

Want to know how many police officers are employed in various parts of the country and compare that against crime rates? Want to know how much revenue is brought in from parking tickets and the cost to collect? Want to know what percentage of Americans suffer from diagnosed depression and how much the government spends on it? That’s in there. You can slice the numbers in all sorts of ways.

Mr. Ballmer calls it “the equivalent of a 10-K for government,” referring to the kind of annual filing that companies make.

“You know, when I really wanted to understand in depth what a company was doing, Amazon or Apple, I’d get their 10-K and read it,” he told me in a recent interview in New York. “It’s wonky, it’s this, it’s that, but it’s the greatest depth you’re going to get, and it’s accurate.”

In an age of fake news and questions about how politicians and others manipulate data to fit their biases, Mr. Ballmer’s project may serve as a powerful antidote. Using his website, USAFacts.org, a person could look up just about anything: How much revenue do airports take in and spend? What percentage of overall tax revenue is paid by corporations? At the very least, it could settle a lot of bets made during public policy debates at the dinner table.

“I would like citizens to be able to use this to form intelligent opinions,” Mr. Ballmer said. “People can disagree about what to do — I’m not going to tell people what to do.” But, he said, people ought to base their opinions “on common data sets that are believable.”

So how exactly does one go about collecting and ordering the nation’s data?

Before he started, Mr. Ballmer was convinced someone must have already done this.

His first instinct, naturally, was to go to a search engine. “My favorite one, of course: I go to Bing,” he said. “And by the way, I check it with Google, just to make sure there’s nothing I’m missing.”

But neither option led him to what he was looking for.

“You’ve got to look at federal, state and local together,” Mr. Ballmer said. “Because I’m a citizen, I don’t care whether I give my money to A, B or C. I just want to know how it lands, how it impacts what’s going on.”

With an unlimited budget, he went about hiring a team of researchers in Seattle and made a grant to the University of Pennsylvania to help his staff put the information together. Altogether, he has spent more than $10 million between direct funding and grants. 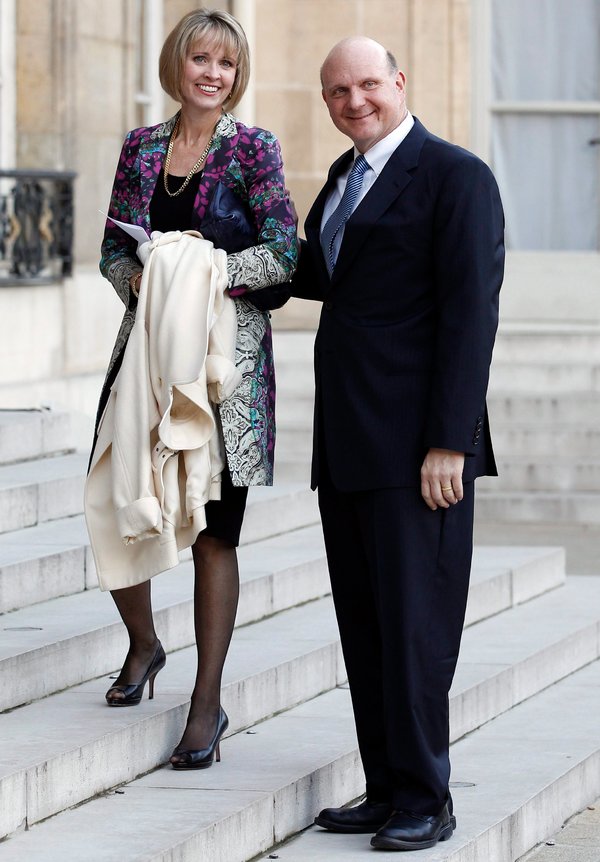 A conversation that Steven Ballmer had with his wife, Connie, after he retired from Microsoft helped give rise to his newest venture.

For Mr. Ballmer, the experience has been worth every cent simply for the surprises that he has discovered looking at the data.

“I love this one!” he said, showing me a slide of information about government employees. “Don’t look, don’t look!” He instructed me to cover my eyes from the number at the bottom of the page.

“How many people work for government in the United States?” he asked, with the excitement of a child showing off a new toy, before displaying the answer. “Almost 24 million. Would you have guessed that?”

“Then people say, ‘Those damn bureaucrats!’” Mr. Ballmer exclaimed, channeling the criticism that government is bloated and filled with waste, fraud and abuse. “Well, let’s look at that. People who work in schools, higher ed, public institutions of education — they are government employees.” And they represent almost half of the 24 million, his data shows.

“And you say, O.K., what are the other big blocks?” Mr. Ballmer continued. “Well, active-duty military, war fighters. Government hospitals. Really? I didn’t know that.”

Suddenly, he explained, the faceless bureaucrats who are often pilloried as symbols of government waste suddenly start to look like the people in our neighborhood whom we’re very glad to have.

“Now people might not think they’re government employees, but your tax dollars are helping somehow to pay 24 million people — and most of these people you like,” Mr. Ballmer said.

His other big surprises?

“Most of the not-for-profits we work with would be 50 to 90 percent government funded,” Mr. Ballmer said, referring to various efforts to fight poverty that he has supported. “I mean it’s funny, but I didn’t realize all these not-for-profits were in a sense almost like government contractors.”

Mr. Ballmer said he wanted the project to be completely apolitical. He has given money to candidates on both sides of the aisle. But as he speaks, you can tell that some of his preconceived notions could change his own politics.

At one point, as he showed me the value of certain tax deductions and blurted out, “If you look at these tax deductions for employer-provided health or for state and local taxes or mortgage-interest deductions, they’re really subsidies to the affluent, which I guess I hadn’t thought about them.”

One rule Mr. Ballmer said his team made early on was to use only government data — no outside providers — to avoid accusations of bias. But this created its own challenges.

For example, Mr. Ballmer, said: “You know it’s not legal to know how many firearms that are in this country? The government is not allowed to collect the number.”

There is data for the number of firearms manufactured, licenses, inspections, “along with other data, but not a total,” he said. “I can’t show it! I’m shocked! But the N.R.A. apparently has lobbied in such a way government can’t report the data.”

Mr. Ballmer is hoping that the website is just the beginning. He hopes to open it up so that individuals and companies can build on top of it and pull out customized reports.

“We’re making philanthropic donations elsewhere — I think of this as another,” he said, referring to himself and his wife. “I don’t even deduct this for my taxes. I pay this with after-tax money, no pretax money, because I don’t want anybody being able to think that factors in. But I feel like it’s a civic contribution more than anything else.”